Office of Equity and Inclusion

NO MEANS NO.
MAYBE MEANS NO.
I DON'T KNOW MEANS NO.
ONLY AN ACTIVE, ENTHUASTIC YES
MEANS YES.

Consent refers to the voluntary agreement of an individual. It is positive, active, and ongoing, and can be withdrawn at any time. Consenting to one kind of sexual act does not mean that consent is given for another sexual act. Consent cannot be obtained where a person is incapable of consenting – as may be the case when intoxicated. Consent cannot be given where a person is induced to engage in the activity by someone abusing a position of trust, power or authority.

Article: The Law of Consent in Sexual Assault 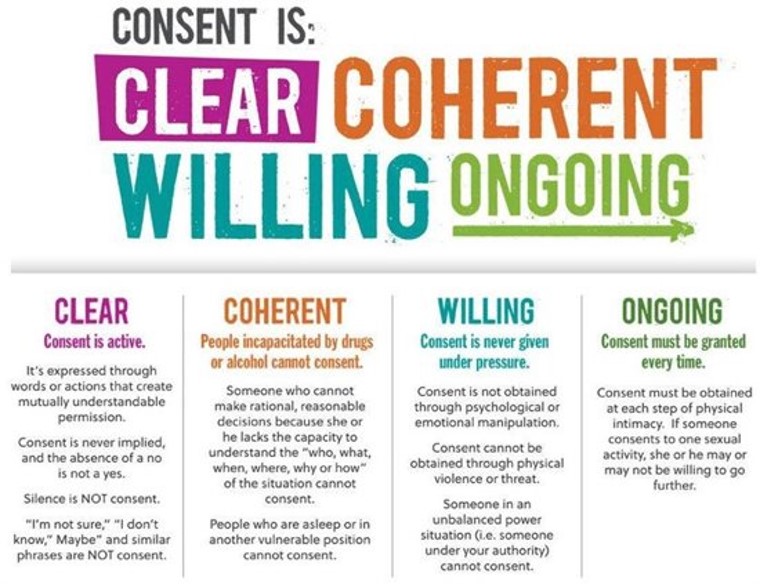 It is everyone's responsibility to get consent if wanting to engage in sexual activity with another person.

You need to get consent for any sexual activity or intimate contact - not just sexual intercourse. This includes kissing and touching. Grabbing someone’s breasts, genitals or buttocks is sexual assault, so is making someone touch you.

Any form of sexual activity with another person without consent is sexual assault.

Alcohol and other drugs complicate asking for and giving consent. Alcohol is often used to commit sexual violence and is considered to be the most used date rape drug.
However, it is important to remember that it is not alcohol that causes sexual violence; rather, it is the person perpetrating it.

The following information is found within, and lightly adapted from, the toolkit: Addressing Alcohol's Role in Campus Sexual Assault

It is the responsibility of the person who is initiating a sexual act to ensure they have consent, regardless of whether both people are drinking/drunk.

How much alcohol does someone need to drink to be considered incapacitated?

Is all sexual contact considered sexual assault if alcohol is involved?