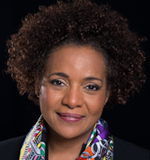 Her Excellency the Right Honourable Michaëlle Jean is a Canadian of outstanding accomplishment. An immigrant who overcame tremendous obstacles to build a distinguished career in journalism and humanitarianism, she served as Canada’s 27th Governor General and Commander-in-Chief from 2005 to 2010 — the first individual of African descent to hold Canada’s highest vice-regal office.

Born in 1957 in Port-au-Prince, Haiti, Michaëlle Jean immigrated to Canada in the late 1960s. She holds a BA in Modern Literature and Languages and an MA in Comparative Literature from the Université de Montréal, and also studied in Italy. Prior to serving as Governor General, she had an award-winning career as journalist, presenter and news anchor in both French and English. Immediately after concluding her mandate, she was appointed as special envoy of the United Nations for Haiti to support reconstruction efforts following the devastating 2010 earthquake. She has also served as Chancellor of the University of Ottawa, recently completed a four-year term as Secretary General of La Francophonie and founded the Michaëlle Jean Foundation to fund youth-led community and civic initiatives.