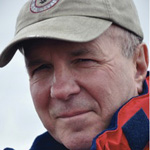 Simon Winchester, a world-renowned journalist and author, is a polymath whose perspective bridges the sciences and the humanities. His ability to transcend traditional subject boundaries enables him to explain the complex interplay between humanity and the natural world.

Born in Britain and currently based in New York, Mr. Winchester’s life can best be described as peripatetic.

Graduating from Oxford in 1966, he initially worked as a mining geologist. While looking for copper deposits in the Ugandan jungle, however, he experienced a ‘Pauline conversion’ and decided to become a newspaper journalist.

His new career carried him to Belfast, London, Washington, New Delhi, New York and Hong Kong, primarily for The Guardian and The Sunday Times. Early in his career, as a result of insightful reporting in Northern Ireland, Mr. Winchester was selected as the 1971 Journalist of the Year during the British Press Awards.

Over the years Mr. Winchester has covered many major stories, including the Ulster crisis, the creation of Bangladesh, the Watergate affair, the Jonestown massacre, the Russian invasion of Afghanistan and the assassination of Egypt’s Anwar El Sadat.

In 1982 he found himself in the Falkland Islands when Argentine forces invaded. Arrested on spying charges shortly afterward, he spent the next three months imprisoned in Tierra del Fuego. By 1985 he turned to freelancing, spending a dozen years in China and covering territory from Siberia to Tasmania.

His foray into the world of publishing began in 1998, with the debut of his first book The Professor and the Madman. Mr. Winchester brought to light a little-known American’s contributions to the Oxford English dictionary. The slim volume with its emotional ending was expected to be a modest hit -- instead it has sold millions of copies. It was the first of many best-sellers, including The Map that Changed the World, Krakatoa: The Day the World Erupted  and more recently, The Man who Loved China.

The nature of Mr. Winchester’s non-fiction writing is wide-ranging, with recurring themes including geology, the English language, China and travel. As his large following attests, he produces scholarly books that remain widely accessible. These narratives often describe human efforts to understand the natural world, a struggle amplified through personal and  social change. His meticulous research lends an encyclopedic breadth to his voice, challenging the reader to seek connections beyond their own perspective.

In 2006, in recognition of his contributions, he was appointed an Officer of the Order of the British Empire in 2006, nominated for his “... services to journalism and literature.”

Most recently, Mr. Winchester has turned his attention to a subject close to the heart and history of our corner to the world.  Mr. Winchester’s newest book, to be published in the Spring, explores the ties between the life-sustaining ocean and the story of humanity’s enduring achievements and follies. Entitled, Atlantic: Great Sea Battles, Heroic Discoveries, Titanic Storms, and a Vast Ocean of a Million Stories, his new book will doubtless attract the same fascinated readership that his previous books have achieved.

For his contributions to journalism and literature, and for his remarkable ability to transcend disciplinary perspectives in the service of deeper understanding of our world, I ask you Mr. Chancellor, in the name of Senate, to confer the honorary degree of Doctor of Laws, honoris causa, on Simon Winchester.