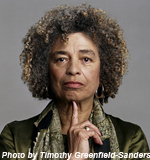 As a scholar, educator and activist, Dr. Angela Davis has challenged and shaped our understanding of so many subjects: feminism, African-American studies, gender and racial equality, critical theory, Marxism, social consciousness, incarceration and more. A strong and powerful voice for women, and for Black women in particular, Dr. Davis stood among the giants of the civil rights movement and was instrumental in waking us up to how race, sex, and class intersect to systematically oppress so many in our society. Her work continues today: she was honorary co-chair of the Women’s March on Washington in 2017, is an active supporter of Black Lives Matter, and works internationally for prison abolition.

Born and raised in Birmingham, Alabama, in the 1940s, Dr. Davis earned a BA from Brandeis University, a Master’s degree from the University of California-San Diego, and a PhD in Philosophy from Humboldt University in Berlin. Since 2008, she has been Distinguished Professor Emerita at the University of California, Santa Cruz. She is also the recipient of many prestigious honours, including the American Book Award, the Thomas Merton Center Award, the Sackler Center First Award, and an honorary doctorate from the California Institute of Integral Studies.