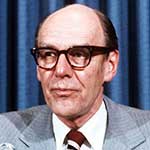 In Canada’s 151 years, no elected provincial premier has later gone on to become prime minister. Yet none have come closer than ex-Nova Scotia premier Robert Stanfield (1914 – 2003), who challenged Pierre Trudeau in three federal elections.

He was so close in 1974, in fact, that he might have won if not for a fumbled football. Stanfield, then Progressive Conservative leader, was on the campaign trail, making a quick stop in North Bay, Ont. Outside his plane, in shirt and tie, he tossed a football around as photographer Doug Ball snapped a few pics. Though he caught more passes than he dropped, the photo that appeared on the front page of The Globe and Mail was of a Stanfield fumble. Some believe it cost the PCs the election.

Though Stanfield is remembered for that photo, the Dalhousie alumnus (BA’36) has also been called “the best prime minister Canada never had” by pundits. It’s a line then-Prime Minister Stephen Harper used when he announced the renaming of Halifax’s airport to the Halifax Robert L. Stanfield International Airport in 2007.

Born in Truro into a family that owned a large textile company famous for its long johns underwear, Stanfield was named after Prime Minister Robert Borden. Yet when he arrived at Dalhousie, he wasn’t interested in the family business, or becoming a politician. Instead, after graduating with a Bachelor of Arts degree in Economics and Political science — winning the Governor General’s Silver Medal for achieving the highest academic standing — he went to Harvard to study law.

He changed his mind about politics, however, after becoming bored with law, and was elected leader of the PC Party of Nova Scotia in 1948 at the relatively young age of 34. In 1956, Stanfield led his party to victory — the first time the PCs had been in power in the province for 23 years. As premier for 11 years, he introduced reforms that included increasing funding for schools and training colleges, designing the first form of Medicare in the province, and creating a provincial parks system.

As the federal leader of the PCs (1967 – 1976), Stanfield was fiercely committed to Canadian unity and Quebec’s role in Confederation. He was also known for defying the neo-conservative social policies of the day. “Increasing the size of the GNP is important,” he told Maclean’s in a 1976 interview, “but it is not in itself a sufficient goal for a civilized society.”

After his death, Stanfield was remembered for his integrity and intelligence, but also his “amiable mischief.” Exhibit A: Years after the fumble photo was published, Doug Ball asked Stanfield to sign a few of the infamous pics. On the last he wrote, “To Doug Ball, I should have taken off my tie.”