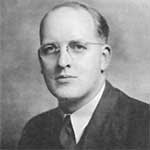 Edward Angus Banting (1908-1966) was a visionary who understood the importance of innovation and technology and its application to the field of agriculture.

That spark of ingenuity and inventiveness ran in the family: Banting, born in Ontario in 1908, was the nephew of Sir Frederick Banting, the Canadian Nobel laureate and co-discoverer of insulin as a treatment for diabetes.

But it wasn’t until World War II that he had the opportunity to truly leave his mark.

It was a time when women were taking on an increasing amount of leadership on the family farm, with their husbands off to war. Suddenly, tasks once socialized as gender-specific became universal, challenging farmers and farm industrialists to develop new techniques and technologies.

Professor Banting, on his part, focused on improving the messy and unpleasant task of plucking chickens. Together with his fellow engineers at what is now Dal’s Agricultural Campus, he invented a simple and inexpensive poultry plucking device, constructed from easily accessible materials.

You can find the 1944 patent for his device today in the Agricola Collection in the MacRae Library. Perhaps what’s most notable about it is that no royalties were charged: anyone who wanted a copy of the plans could secure a set for twenty-five cents at the time. Requests for the machine came in from all over Canada, parts of the U.S, a number of European countries and at least one from Asia and several from Australia. In 1945, Banting was reporting that at least 20 requests were coming in per week.

It’s an example of the innovative thinking and leadership that garnered Banting international acclaim. He capitalized on available resources — both human and machine — to improve an agricultural process through technology and innovation. His legacy lives on not only through the values of Dal’s Agricultural Campus, but the physical campus itself: with the Agricultural Engineering building that bears his name.