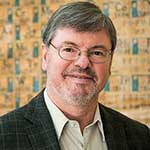 Though he didn’t know it at the time, Axel Becke’s (1953 – present) career took a turn for the stratosphere during a 1991 lunch on the French Riviera with Dr. John Pople.

Over the previous decade, Dr. Becke had developed a formula to vastly improve the accuracy of chemical calculations using Density Functional Theory (DFT). But few were listening to him. Now, at a conference lunch, he had the ear of a true titan of theoretical chemistry and future Nobel Prize winner. And it didn’t take long for Dr. Pople to be convinced — certainly before the cheque arrived.

That conversation “turned the tide,” says Dr. Becke, and a year later Dr. Pople, who had discovered the most ubiquitous computational chemistry code in the world, was using Dr. Becke’s ideas.

Today those ideas have made DFT the most-used computational method in electronic structure theory. Its applications allow us to do everything from developing nanotechnology to designing better drugs to making stronger concrete. “At a fundamental level, DFT can be used to describe all of chemistry, biochemistry, biology, nanosystems and materials,” Dr. Becke told Nature in 2014. “Everything in our terrestrial world depends on the motions of electrons — therefore, DFT literally underlies everything.”

No wonder, then, Dr. Becke is one of the most cited scientists in the world. Two of his papers landed on Nature’s 2014 list of the top 100 most-referenced science articles ever — one at number 25, the other at number eight, both with Becke as the sole author.

A big credit for his success goes to Russell Boyd, he says, a mentor and his supervisor during his postdoctoral fellowship at Dal from 1981 to 1984. Dr. Boyd was a young, talented theoretical chemist in his own right, and he was smart enough to let a 28-year-old Dr. Becke explore. “The three years that I was here, he basically just left me alone. And that’s where I came up with my ideas, and those ideas have served me for the rest of my career, and they serve me now.”

After a couple of decades as a chemistry professor at Queen’s University, Becke returned to Dal in 2006 to serve as the Killam Chair in Computational Science. From then until he retired from teaching and became Professor Emeritus in 2015, the accolades started pouring in: Fellow of the Royal Society of London (2006), Theoretical Chemistry Award of the American Chemical Society (2014), Medal of the Chemical Institute of Canada (2015), the Canada Council Killam Prize (2016) and Canada’s most prestigious science prize: the $1 million NSERC Herzberg Gold Medal (2015).

And to think it all hinged on a lunch beside the Mediterranean.