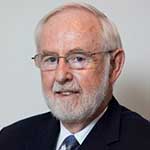 Growing up near the coal mines surrounding Sydney, N.S., Arthur McDonald (1943-) is no stranger to the world of working underground.

He could hardly have predicted, though, that after an illustrious career in astrophysics, the biggest scientific breakthrough of his life would come two thousand metres below the earth’s surface.

His journey to the field-shattering discovery that neutrinos have mass — an advancement that fundamentally changes the way we understand the universe, and made him a co-winner of the 2015 Nobel Prize in Physics — began a long way from his subterranean laboratory, SNOLAB, deep beneath Sudbury, Ontario.

It started in Halifax in 1960. He moved into the old Pine Hill Divinity Hall on Francklyn Street started his Bachelor of Science degree at Dal with no real idea where he wanted to go with it.

“I came to Dalhousie because it was well-known for its comprehensive science departments,” says Dr. McDonald, who credits the late Professor Ernest Guptill with inspiring his career path. “He went out of his way to interest students in physics, and how you could use math to understand how the world works. He really convinced me that physics was a fun thing to do.”

He continued on at Dalhousie to complete his master’s research. “It was the first time I was doing hands-on real research in the laboratory,” says Dr. McDonald. “The paper that came out of my master’s work is actually my most cited paper. It helped me get offers at schools like Caltech.”

After finishing a Ph.D. at Caltech Pasadena, a stint at the Chalk River Nuclear Lab, and a professorship at Princeton University, Dr. McDonald was wooed back to Canada by the project that would define his career.

Using a 1,000-tonne tank of heavy water — regular water with the hydrogen atoms replaced with deuterium — placed two kilometers beneath the surface in an old nickel mine, Dr. McDonald, and his team of nearly 300 scientists set out to measure one of the least-understood particles in the universe.

After years of research and time underground, Dr. McDonald’s team finally found what they were looking for: evidence that neutrinos have mass, adding whole new dimensions to our understanding of how matter works.

The repercussions of Dr. McDonald’s discovery are still rippling through the scientific world. Along with earning him some of the biggest awards in his field (not just the Nobel Prize, but Canada’s Herzberg Gold Medal and Killam Prizes), the research at SNOLAB continues to push the boundaries of how we view the universe around us.

And it all began at Dalhousie.

“Dalhousie is an icon in the Maritimes,” says Dr. McDonald. “It set me up for a very enjoyable career.”