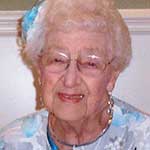 Henry Hicks was one of the most significant presidents in Dalhousie’s 200-year history, overseeing nearly two decades of dramatic growth and change on campus. But he didn’t do it alone. If Hicks is considered the architect of the modern Dalhousie, then Alice Moore (1917-2018), his executive secretary and confidant for 14 years, was the project manager.

Moore was born in Halifax three months before the 1917 Explosion. As she neared adulthood, she took a job at Eastern Canada Savings and Loans (the precursor to Central Trust) to help earn extra money for her family following the death of her father. Starting as secretary, she rose through the ranks to become department head.

She also met her future husband, Morris, at the company — on her first day of work, no less. They worked together in the same building for years, but when the company implemented a policy forbidding husbands and wives working together, Moore was let go.

She was devastated, but her supervisor had an inside track on another opportunity: Dal’s president was looking for a new secretary.

She got a call back from the President’s Office that afternoon. It had been years since she had practised secretarial shorthand, and she was worried she’d be a bit rusty. But the skills came back quickly, and her leadership experience soon made her an invaluable asset at a key time in Dal’s history.

Dalhousie was evolving rapidly in the late 1960s. Many buildings we take for granted now as stalwarts of campus life were mere holes in the ground when Moore walked to her office each morning. The Dalhousie Arts Centre and Dalplex were two spaces that sprung out of the ground while Moore handled the heavy administrative workload — made doubly complicated by Hicks’ frequent trips to Ottawa to fulfill his duties as a Canadian senator.

“It was busy in those days, when he was a senator, a lot was happening at Dalhousie” she said. “Our office held it all together.”

Even after her retirement Moore continued to work with Hicks, moving from their office in the administrative building — the one we now call the Henry Hicks Building — to his home office. She worked with him until the day he died in December 1990.

Moore, who passed away in early 2018 at the age of 100, looked back fondly on her time at Dalhousie. She remembered when denim jeans came into fashion, and when students started wearing long hair.

“It was nice being around all the young people. Dalhousie was wonderful, it was a big part of my life,” she said with a laugh, “which is great because at the time I was hired it was the last place I wanted to work.”