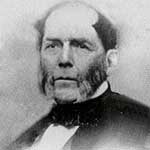 By the time Dr. Abraham Gesner (1797-1864) joined Dalhousie as a professor of natural history in 1863, he’d already worked his way through several careers: physician, geologist, government representative and strong advocate for the Mi’kmaq people, museum founder and author, to name a few.

But, perhaps most importantly, Dr. Gesner had invented kerosene in 1846. In doing so, he helped spur the development of the modern petroleum industry.

Dr. Gesner’s path to creating what was to become the standard fuel for lanterns that illuminated homes in the late 1800s was as winding as some of the mineral deposits he studied throughout the Maritimes, advocating their economic potential to the British government. Although Nova Scotia-born Gesner trained at medical school in London, England, he returned home in 1825 to set up his first practice in Parrsboro. On his way to and from visiting patients, Dr. Gesner recorded geological observations — work that inspired the first of his many books.

Shortly thereafter, Dr. Gesner was recruited to do similar surveys in neighbouring New Brunswick and later P.E.I,, becoming the first government appointed geologist in a British colony. He amassed a substantial collection of specimens along the way and in 1842 opened a museum. Financial difficulties soon led creditors to take over his collections, however, and they were later donated and stored until the founders of the New Brunswick Museum acquired them in 1890. They are now considered one of the first natural history museum collections in the country.

Despite his financial woes, Dr. Gesner devoted much of his meagre income to scientific experiments involving hydrocarbons. In 1846, he developed a process to refine liquid fuel from coal, bitumen and oil shale — a discovery he named kerosene. Kerosene produced a clean, bright light and was more economical to produce than existing fuel products, such as whale oil (Some argue kerosene’s low cost was instrumental in the decline of commercial whaling- where one sperm whale provided 25-40 barrels of oil).

Eight years later, Dr. Gesner moved to New York City where he filed patents and set up the North American Kerosene Gas Light Company. Within a few years, kerosene was advertised widely and went on to become the lighting fuel of choice. The later discovery of petroleum made kerosene even easier to produce and allowed his company to meet increased demand. His patents were eventually bought by Standard Oil, the largest oil refining company in the world at the time.

With such a bounty of life experience, Dr. Gesner no doubt made a remarkable professor of natural history at Dalhousie. Sadly, he died in 1864, not long after joining the university. Although his time at Dal was short-lived, Dr. Gesner’s posthumous induction into the Order of New Brunswick in 2016 shows his impressive legacy continues to light the way to this day.