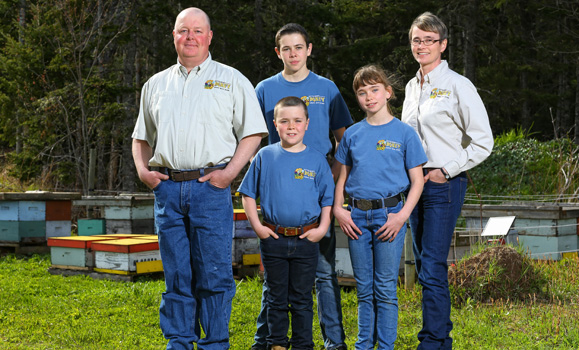 “Are you afraid of getting stung?”

For Paul Kittilsen, that was the question that started it all.

Paul is not your typical farmer. Not one single dairy or beef cow can be found on the Kittilsen farm. What you will find though are bees, lots and lots of honeybees.

Paul Kittilsen (class of ’89) and his wife Lori (class of ’90) own and operate a honeybee farm in the rural community of Debert, NS. They have three children, Benjamin, 13, Sarah, 11, and Ian, 8, who all grew up with a respect for the small stinging insects and a love for honey.

Paul’s journey as a beekeeper started when he was just a teenager. At the age of 16, he began working on the farm of a family friend, Frank Woolaver (Class of ‘46). Never afraid to get stung, Paul quickly learned that he had a strong passion for the hard-working insects. Paul acquired his own hives at the age of 18 and started beekeeping fulltime in 1995. Today, Paul is in his 32nd year of beekeeping.

The Kittilsen farm is a first generation farm, meaning Paul and Lori established it themselves. They purchased their current property in Debert in 1992 and began to build the infrastructure needed to expand their number of hives. Today the farm is a 1200 colony operation, a federally inspected honey packing facility, and a one acre cranberry bog. There are approximately 230 active beekeepers in Nova Scotia but the Kittilsen’s are one of the few fulltime beekeeping operations in the province, producing about 75 pounds of honey per hive, per year.

Beekeeping is a year-round task for the Kittilsen’s and no two days are ever the same. Paul works full time on the farm while Lori works for the Nova Scotia Department of Agriculture in Truro, NS. The Kittilsen’s employ two full time employees in the summer in addition to their Apiary Manager, John Stiles (class of ‘97). John has been working on the Kittilsen farm for 17 years.

“We owe a great deal of thanks to the commitment of our employees,” Lori explains. “They play a key role in the business with their positive attitude and knowledge of agriculture. We are very appreciative of everything they do for us and our business.”

“We have about 50 different bee yard locations where we keep the bees in the summer,” Paul explains. “Our bee yards are typically located on agriculture land where the bees won’t disturb people and where people won’t disturb them. We do have some bees that we keep on the farm but not many, during the summer at least. We are very appreciative of all the land owners who provide locations for our colonies”

In the fall, the honey supers are brought to the Kittilsen’s farm for extraction. The honey supers are wooden boxes in which 8-10 wooden frames are hung. The bees build their honeycomb on the frames and store their honey in the honeycombs. Once the honeycombs are full, the bees seal them with beeswax. The honey is extracted from the supers using an automated machine and placed in barrels for storage to be packaged throughout the year.

Winter is a slow season for beekeeping but there is still work to be done. For the wintermonths, some of the bees are moved to the Kittilsen farm and stored inside, but the majority do stay outside. They are wrapped with black plastic and receive insulated covers to keep them warm in order to help them survive the harsh winters.

“The bees don’t produce honey in the winter,” Paul explains. “They stay in the hive and cluster together around the queen to generate heat to keep her warm and alive. Unfortunately, some hives don’t survive the cold winter.”

During the winter, Paul spends his time packaging honey as the orders arrive. The Kittilsen’ssell their honey locally, with a few bulk orders extending past their usual locations. They sell to the Masstown Market, Sobeys locations in Truro, New Glasgow and Antigonish, the Local Source in Halifax, the Truro Farmers Market and a few other local farmers markets. The

Kittilsen’s don’t just sell liquid honey either. Their creamed honey and beeswax candles are also popular products that they produce on their farm. In the fall, their cranberry bog produces cranberries which they bag and sell fresh as well.

Not every aspect of beekeeping has been easy for the Kittilsen’s though. They have had to deal

with a pest called Varroa mite, a parasite that attacks the bees and can eventually wipe out an entire colony. In addition to Varroa mite, black bears and viruses are challenges for beekeepers as well.

“The greatest challenge has been to learn to live with the Varroa mite and other pests,” Paul explains. “It’s harder than ever to keep honeybees alive.”

In addition to the bees, the Kittilsen’s farm is home to a few sheep, rabbits and chickens. These animals are not used for farming though. All three of their children are actively involved in 4-H and so these animals are used for showing. Not only do the children help take care of their 4-H animals, they help out with the bees as much as they can.

“There is a lot of heavy lifting involved in the business,” Lori explains. “The children are all just starting to reach an age where they are able to help out. They will often help pack the jars of honey into boxes and label the orders.”

Benjamin and Sarah can often be found on Saturday mornings at the Truro Farmers Market selling honey and beeswax products. Ian, on the other hand, enjoys the more hands-on aspect of beekeeping.

“Ian is like a mini Paul,” Lori laughs. “He really loves the bees. He loves putting on his bee suit and going out to check the hives with Paul.”

For the Kittilsen’s, farming with their family is important but it’s not everything.

“We encourage the children to do what they want to do, whether it be sports or arts or something else,” Lori explains. “If they want to help out on the farm, that’s great. If there is something else that they would like to pursue, we are going to encourage and help them where we can, every step of the way.”

For Paul and Lori Kittilsen, beekeeping is more than a full time job. It’s their lifestyle and they wouldn’t have it any other way.