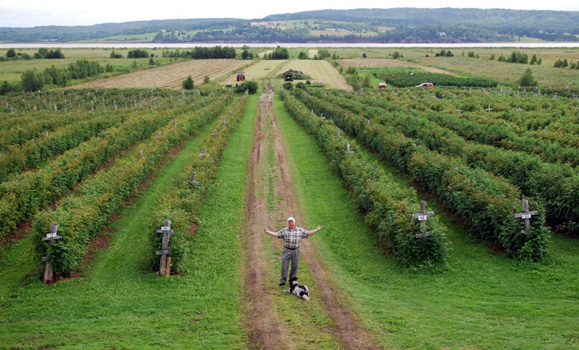 When Gerry Harper (’57) talks about his small raspberry farm that has been in the family since 1915, a smile spreads across his face. The twinkle in his eyes in unmistakable. Gerry truly loves what he does.

Gerry is the owner and operator of Harper’s U-Pick, one of the largest raspberry farms in Southeastern New Brunswick. Located along the Petitcodiac River, Harper’s U-Pick proudly cultivates a variety of fruits for public picking. Although predominantly a raspberry U-pick, Harper’s offers gooseberries, elderberries, black currents, and more. 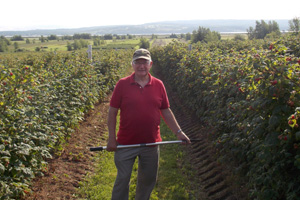 “We added a few rows of raspberries in the early ‘90’s” Gerry explains. “I became more interested in raspberries and kept expanding. We added irrigation and then kept adding a few more rows. We got a bit carried away there!”

While the farm has changed dramatically over the years, it has been operating on the same area of land since 1915 when the Harper family moved there. George Harper, Gerry’s grandfather, originally purchased part of the land where he operated a small farm market. He sold cucumbers, summer savory, and cabbage, which he processed to sauerkraut.

“He had a few cows on the farm as well,” Gerry explains. “The farm was something I got attached to. I spent all of my summers there with him. I have a lot of memories there.”

Gerry took over the farm 18 years ago. Over the years, it has expanded and production has been steadily increasing. The greatest challenge, Gerry notes, was the high water levels on the property. The land sits on a number of natural springs which made farming the land difficulty. With careful planning and proper drainage installed, raspberries began to thrive.

“Some people told me I was crazy,” Gerry laughs. “But after a couple of years they took off. We’ve added some elderberries but they haven’t really taken off yet.” 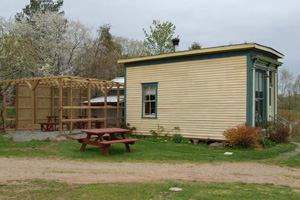 Although the farm today operates primarily as a U-pick, some berries are harvested and sold to wineries. Others are sold to vendors at the Farmer’s Market. The rest are left for picking. People from near and far enjoy the picking season at Harper's U-Pick.

“We’re located in a predominantly English speaking area,” Gerry explains. “About 60% of our pickers are Acadian people. It’s a big tradition with them for making desserts. We get a lot of Newfoundlanders as well, people who visit every year on holidays and staying with relatives. I meet quite a few interesting people!”

While the hobby farm hosts a variety of berries, it’s the experience that they offer to pickers that Harper’s U-Pick prides itself on. With a small store on the property decorated with interesting antiques, shaded picnic tables, a grapevine-covered gazebo, and multiple beds of beautifully kept flowers, Harper’s U-Pick ensures that their property brings a smile to the faces of those who visit.

“What gives me the most pride is having people come in and enjoy their experience,” Gerry explains. “Seeing them come in smiling. My daughter works hard tending to the flower beds. We try to make the place look attractive and want to give customers a good experience.”

Harper’s U-Pick is Gerry’s pride and joy, although it was not always his primary career. After earning a diploma in engineering at NSAC in 1957, Gerry worked for Farm Credit Canada for 30 years as the district manager for NB and NL. His farm was simply a pastime. Now well into his retirement, Gerry works on the farm full time, not to make a living but simply because he enjoys it. 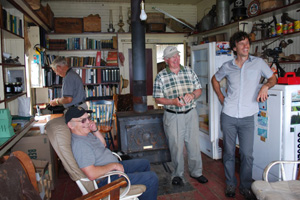 It’s not just the pickers though who Gerry considers family. Gerry operates Harper’s U-Pick alongside his good friend Frank. Frank, also retired, has become a staple on the farm overseeing the store, the scales, and helping out where her can. During the summer in peak season, Gerry will hire one other employee to help out around the farm. During the off season, while there are no plants to tend to, Gerry admits there is still lots to do.

“We don’t work on the farm every day, we’ll take a few weeks off here and there,” Gerry explains. “There’s always something to fix. We go down to the store and pick away at things. Frank always has the coffee going in the morning and two or three guys will come in and we’ll sit and chat for a while over coffee. It’s like our own Tim Hortons’, we’ve got everything except the donuts!”

Looking towards the future of the U-Pick, Gerry admits he isn’t sure what will happen. His kids are not directly involved with the small hobby farm and Gerry isn’t exactly sold on the idea of selling the farm.

“There’s general wear and tear on some things,” Gerry says. “The posts are getting old and will soon need to be replaced. I don’t really want to sell to anyone because they would be facing a pretty big job. I know it’s not good planning but we’ll keep it up the way we are right now. I’m not sure, maybe we’ll just wind it down someday.”

For now though, pickers can look forward to visiting Harper’s U-Pick during the summer months. Plants have been ordered for next year and Gerry looks forward to seeing the returning pickers and hopefully some new faces. Along with his passion for his small family hobby farm, it’s all part of what makes Gerry’s job so enjoyable.