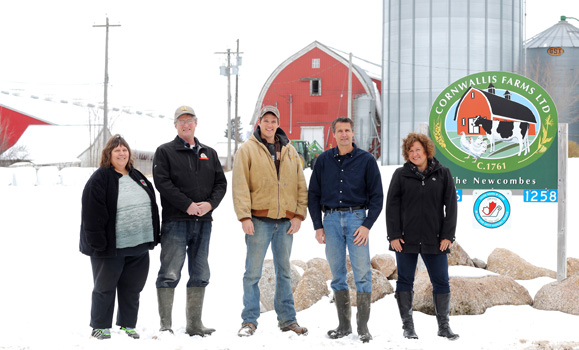 Craig and Geneve Newcombe, in partnership with Craig’s brother Brian and his wife Edna, own and operate Cornwallis Farms. The farm, in operation since 1761, consists of 1,700 beautiful acres in the Annapolis Valley and is home to dairy cows, laying hens, and broiler chickens.  In addition, the farm produces a number of crops and has an on-farm feed mill to provide feed for all of their livestock.

“The farm is very self-sufficient,” Geneve explains. “Over ninety percent of ingredients used in the feed are grown on our farm. We also have an extruder and are able to dry and extrude soybeans for use in our livestock rations.” 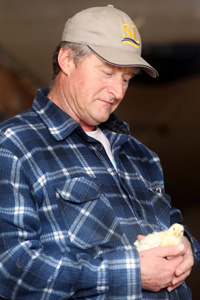 The Newcombes laying hen operation consists of 21,000 laying hens that produce about 20,000 table eggs daily. The eggs produced on their farm are shipped to Atlantic Poultry Incorporated for grading and distribution under the Nova Egg label.

“Our eggs are shipped to stores all across Nova Scotia,” Geneve explains. “It makes our family proud to know that we are supplying such high quality, locally produced eggs to people all across the province.”

In addition to laying hens, Cornwallis Farms also has a broiler chicken operation. Geneve explains that they have six barns that produce 1.4 million kilograms of meat each year. Their broilers are shipped to Eden Valley Poultry for processing and distribution.

While Craig mostly oversees the poultry and feed mill operations, Geneve looks after the record keeping and finances and Brian oversees the dairy and cropping operations. Sixty-five dairy cows are housed in a free-stall barn and are fed a mixed ration of haylage, corn silage, grain corn, and soybeans, all of which are grown and processed on their farm. The cows are milked twice a day in a double six parallel parlour. For Brian, farming is both a lifestyle and a business.

“Farming definitely has its challenges but it’s a very rewarding lifestyle,” Brian explains. “Margins are always getting tighter so you have to start looking at where you put your investment dollars- the equipment you want to invest in and what kind of inputs you want or can cut back on.” 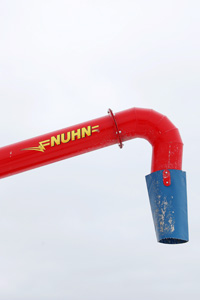 With 1,700 acres of crop land, the environment and taking care of the land is a top priority for the Newcombe family. In 1993, they stopped tilling their farm land to reduce soil erosion and improve the health of the soil. Today, the majority of their crop land is not tilled at all or strip-tilled, a conservation system that uses minimum tillage and only disturbs a portion of the soil that is to contain the seed row.

“One of our main goals is to become as environmentally sustainable as we can,” Craig explains. “We want to continue to reinvest in the farm to ensure that we, and the future generations, are in an optimal position to face future challenges and opportunities. Our future plans include renovating some of our buildings, installing a new housing system for the laying hens, and installing robotic milkers for milking cows.”

Brian also adds that they use GPS and variable rate controllers when fertilizing their crops. This helps reduce overlap and excess fertiliser from being applied.

“We like to believe that we have been good stewards of the land that has been entrusted to us,” Geneve explains. “We’ll continue to do our best to be mindful of the environment and our community around us.” 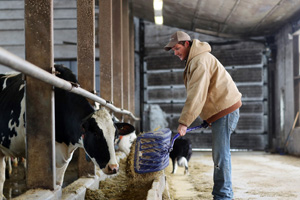 Although Craig and Brian currently own and operate Cornwallis Farms, Craig’s son David is eager to learn the ropes. In 2014, David graduated from Saint Mary’s University with a Bachelor of Commerce and has since brought his business knowledge back to the farm. David is the tenth generation on the farm.

“Growing up on the farm, I learned how to care for the animals and about planting and harvesting from my family,” David explains. “I wanted to know more about the business side of things and I wanted to bring that back to the farm.”

Craig and Geneve’s daughter, Kathleen, is currently in her third year at Acadia University. She studies kinesiology with the aspiration to someday be an occupational therapist. Although Kathleen is not on the farm full time, she works on the farm during the summer and on Christmas break collecting eggs and working in the chicken barns.

Brian and Edna also have three children.  Their eldest daughter, Leah, is in her third year of business at Saint Francis Xavier University and is studying to be an accountant. Their son Evan (14) enjoys working on the farm when time allows. Ryan, the youngest of the three, is 10.

In addition to raising their children and managing a bustling farm, Craig and Geneve and Brian and Edna have always been involved and give back to their communities as much as they can. Both Craig and Geneve currently sit on a number of provincial agricultural and community boards and Brian is chair of the Annapolis Valley Farmland Trust.

“My passion has always been in agriculture awareness,” Geneve explains. “I love to host farm tours, visit schools, and speak to individuals or groups to help share knowledge about agriculture. As farmers, we have a great story and need to take every opportunity to share it.” 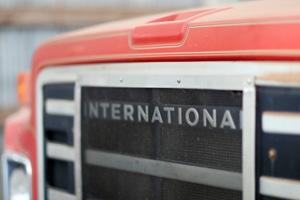 With the farm transitioning into the hands of the tenth generation, Craig is proud that his son David chose to follow in his footsteps and that the farm will be passed down to yet another generation of Newcombes.

“For me, farming was not a choice,” Craig says. “Choice infers a decision had to be made. Growing up on the farm was everything. I totally embraced it, loved it and never considered anything else. Listening to my son who has returned to the farm enthusiastically describe to someone his excitement and pride in being the tenth generation to farm this land, it’s clear it wasn’t a choice for him either. The enthusiasm he shows to take on the challenges of a world who knows less about their food and where it comes from, that’s what gives me the most pride.”