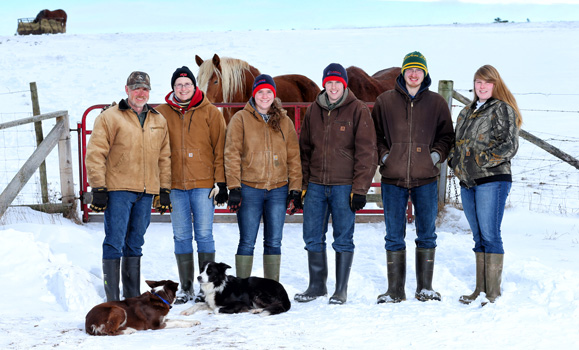 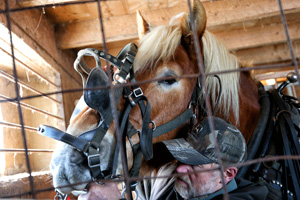 Although primarily known for its dairy cows, Milferns Holsteins of Onslow, NS have expanded way past dairy cows. They have a little bit of everything.

“Diversity. That’s what sets us apart,” Fred explains. “No two days are ever the same. With so many different aspects to our farm, our routine is never the same from day to day.”

The 450 acre farm has been in Fred’s family for nine generations. When he graduated from high school, Fred began working on the farm that was owned by his father. He attended the Nova Scotia Agricultural College (now Dalhousie Agricultural Campus) to take some two-week long condensed courses in different subjects, including dairy management. He formed a partnership with his father and eventually took over the farm. 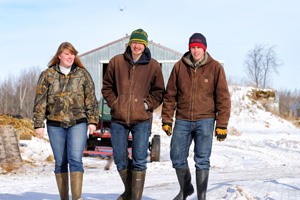 Now, he and his wife Anne and their two children, Fabian (Class of ’13) and Andrea, own and operate the family farm. With dairy cows, sheep, horses and border collies, the Hamilton’s farm is never a dull moment.

“I had always wanted a draft horse but my father thought I had to justify having a horse,” Fred laughs. “Eventually, I got my first draft horse to use in harness. I built a small sleigh that Anne and I would go out in. Then the neighbours wanted to go for rides. I built a bigger sleigh and then got a team of horses. The rest is history.” 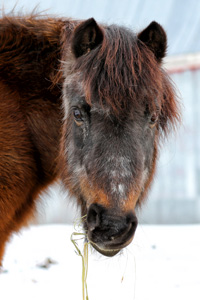 Not only was Fred able to incorporate his love for draft horses into his family business, the Hamilton’s teams of horses are used for weddings, parades, and even TV shows.

The Hamilton’s draft horses had a role in the Moby Dick miniseries, shot in Shelburne in 2009 and aired in 2011. Fred and his team of horses also played a more recent role in The Book of Negroes. Filmed last April into May, Fred and his horses spent about a month filming. They travelled to Shelburne, the Fortress of Louisburg, Cole Harbor and Enfield for filming.  The miniseries is now airing on Wednesdays nights on CBC.

“I watch it every week!” Fred smiles.

Sleigh and wagon rides aren’t the only hobby that Fred was able to incorporate into his family’s farm. Fred also has a passion for border collies. The Hamilton’s currently have seven border collies and will occasionally breed and sell pups. The collies are used for everyday use on the farm as well as a hobby for Fred.

“I was 13 when I got my first border collie,” Fred explains. “It was then that I realized how useful they could be around the farm. Not only are they hard workers, working with them gives me a sense of satisfaction.”

Fred participates in many trials, competitions and herding demonstrations with his border collies. He travels as far as New Brunswick for trials and often does local demonstrations. 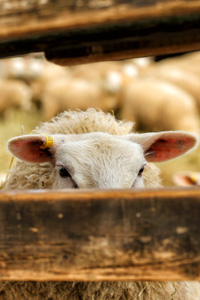 “Going to trials really gets you out around and meeting new people,” he explains. “When you have a good run, it really makes you happy. I hope to be able to do more trials in my retirement.”

Fred explains that the border collies are also part of the reason that the Hamilton’s have sheep.

“We used them on the farm for beef cattle but we needed some sheep to practice with. I couldn’t go to dog trials with dogs that have never seen sheep! Eventually we got rid of the beef cattle and expanded our sheep operation.”

Today, the Hamilton’s farm is home to 45 dairy cows, 220 ewes that produce 400 lambs each year, five draft horses, four light horses, and seven border collies. They have 35 acres of corn, silage, hay and grass that they harvest themselves. The entire family, Fred, Anne, Fabian and Andrea, all do their fair share of hard work. Fred, Anne, Fabian and Andrea’s fiancé, Leo, work on the farm full time while Andrea completes her animal science studies at Dal AC and works a part time job at Clarence Farm Services Ltd. 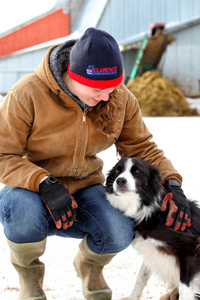 While the Hamilton’s lead a very busy lifestyle, they still manage to contribute to their community. The entire family has greatly impacted their local 4-H club. Fred explains that his mother was a 4-H leader and he himself has been a 4-H leader for 30 years. Now, both Andrea and Fabian are leaders. The Hamilton’s have also hosted Achievement Day on their farm many times.

“The kids were both brought up through 4-H,” Fred explains. “Fabian is now a sheep leader and Andrea is a light horse leader. It gives me a great sense of pride watching the kids come up through 4-H and now to become leaders.”

“Something about going out to the fields on a sunny day and seeing hawks fly overhead, swooping down at field mice just gives me a sense of satisfaction,” he says. “You definitely have to give it your all and if you’re not prepared to give it your all 24/7 then it’s not for you. Everyday can be a challenge and you need to learn how to adapt and deal with those challenges yet continue with your everyday responsibilities.”

For Fred, maintaining such a diverse farm is a full time operation. With so many different animals no two days are ever the same. Fred wouldn’t have it any other way. He has everything he needs to be successful- time, patience, dedication…

And a lot of help and support from his family.