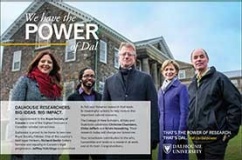 Dalhousie is proud to be home to two new Royal Society Fellows. One of the country’s best legal thinkers, Richard Devlin fosters fairness and equality in Canada’s legal progression. Jeffrey Hutchings is committed to fish and fisheries research to help restore this important natural resource.

Posted by Jane Doucet on September 9, 2015 in Research, News, Awards

Schulich School of Law Professor Richard Devlin is one of this country’s leading thinkers on legal theory, equality, legal ethics, and the regulation of the legal profession. In light of his significant contributions to legal literature and many other career accomplishments, we were thrilled when he was named one of 87 new Royal Society of Canada Fellows in early September, along with Professor Jeffrey Hutchings of the Department of Biology.

According to the RSC, Prof. Devlin has “produced some of the most interesting and provocative writing in the area of critical legal studies. In that period he tackled such diverse topics as Irish hunger strikes, disability, Aboriginal rights, corporate law, contract law, constitutional law, and judicial bias.”

More recently, anticipating profound changes in the context of legal practice and the regulation of the legal profession, he has written extensively about judicial ethics, self-regulation, and legal ethics education, which has pushed him to the forefront of this field.

“The Royal Society is more than an honorary institution today – it plays an important role in promoting the public interest.”

“I appreciate that the Royal Society recognizes that you don’t have to be a multimillion-dollar grant recipient to receive this honour,” says Prof. Devlin, who was honoured in the Social Sciences category. “It’s not that big grants don’t have a role to play. But with my research, sometimes it’s as simple as having $2,000 to $4,000 to hire a research assistant every year to support research productivity. Just as grants to small business can have as great an impact as investments in big business, smaller pools of ongoing research support can make a big difference to academic scholarship. It would be great if the granting agencies and universities could recognize this.”

The RSC fellowship also signals the vitality and importance of social sciences, humanities, and the arts, adds Prof. Devlin. “The Royal Society is more than an honorary institution today – it plays an important role in promoting the public interest. Awards like this acknowledge that the social sciences matter. The nature of my work is interdisciplinary, and I regularly draw on work from other disciplines including sociology, history, political science, and philosophy.”

Although Prof. Devlin has been teaching law for almost three decades, he didn’t set out to become an academic. “It was accidental,” he laughs. “I went to law school at Queen’s University Belfast and planned to be a barrister. Then I went to grad school at Queens in Canada and got the bug of freedom to pursue questions and answers as an academic. My parents had always wanted me to be a priest, but becoming a legal academic was the second-best choice!”

“I’ve always been interested in looking at how the law inhibits or enhances equality.”

Born and raised in Belfast, Prof. Devlin came from a background where significant discrimination existed on the bases of religion, class, and gender. As a result, throughout his career he has tried to promote equality through a commitment to social justice. “I’ve always been interested in looking at how the law inhibits or enhances equality,” he says.

There are many forms of legal inequality; for example, access to justice, economic drivers of the delivery of legal services, the job market for lawyers, the urban/rural split, and race, gender, and disability.

“The legal profession is changing in the light of a number of significant issues right now,” says Prof. Devlin. “And so as faculty members we have to ask ourselves, what is Schulich Law’s responsibility? For example, I think pro bono work should be mandatory for law students and faculty. We need curriculum reform around the teaching of ethics, and I think we should introduce it in first year, not third. It should be taught in small groups, so students can have a more engaged and reflective learning experience.”

Embracing the holy trinity of academia

Prof. Devlin considers himself equal parts teacher, researcher, and administrator, and he believes that academics should multi-task in these roles. “It’s important for students to be exposed to as many faculty members as possible so the students can get a sense of their professors’ research passions, since one career option is research and teaching” he says.

“The legal profession is radically changing, and we should be turning out graduates who are intellectually prepared to practice in any area of the law and indeed beyond the law.”

“As legal academics, we have the opportunity to anticipate and embrace change in society – in our profession, teaching, and social norms,” he says. “We can give that change shape and direction. And we have to be constantly looking forward to see what’s coming next. The legal profession is radically changing, and we should be turning out graduates who are intellectually prepared to practice in any area of the law and indeed beyond the law. They should know the challenges and responsibilities that come with being a lawyer.”

Not a day goes by when Prof. Devlin isn’t grateful for his accidental career path. “Being a law professor is a fantastic job, because you have the opportunity to work with excellent students and the freedom to pursue whatever research project you want,” he says. “There’s also a fair amount of freedom around teaching – you can pursue any topic from multiple perspectives.”

And while Prof. Devlin plans to continue teaching, researching, and publishing, he’s also looking forward to exploring opportunities to collaborate on relevant and engaging RSC projects.

“The Royal Society has an important role in promoting work done in the public interest and increasing public knowledge,” he says. “I’m interested in working as a member of the Royal Society with other highly motivated academics. For example, one possibility is to help develop a national response by Canadian universities to the Truth and Reconciliation Commission Report, where that work is addressing an equality issue that is clearly in the public interest. I still have lots of energy, and undoubtedly many other opportunities for progressive engagement will present themselves.”