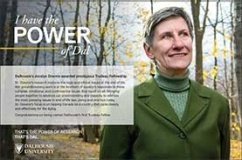 Jocelyn Downie's research exploring the legal and ethical issues at the end of life is at the forefront of society’s responses to these complex, emotional, and controversial issues that touch us all. Her groundbreaking work has earned her recognition as Dalhousie's first Trudeau Fellow.

The Schulich School of Law congratulates Professor Jocelyn Downie, announced today by the Pierre Elliott Trudeau Foundation as one of this year’s recipients of its prestigious research fellowships. The Pierre Elliott Trudeau Foundation, which celebrates engagement in public issues of importance to Canadians, named five researchers in the social sciences and humanities as fellows for 2015. Together, the fellows will share $1 million in awards.

A Professor in the Faculties of Law and Medicine and a faculty associate of the Health Law Institute at Dalhousie, Downie is the first Dal scholar to be named a Pierre Elliott Trudeau Foundation Fellow. She joins the Trudeau Foundation community with her Schulich School of Law colleagues, Trudeau scholars Elaine Craig and Benjamin Perryman.

The Pierre Elliot Trudeau Foundation fellowships recognize public intellectuals in the humanities and social sciences who venture beyond the boundaries of their disciplines to find new solutions to complex issues of major importance to Canadians. The five new fellows appointed this year conduct research on assisted suicide, Arab-Canadian youth, Canada’s relationship with the Indo-Pacific, justice as applied by armed rebels, and ethnobotany in support of Indigenous land claims. In addition to receiving a total of $225,000 over the next three years, each new fellow will enjoy unique access to the rich intellectual network of researchers and practitioners who have joined the Pierre Elliott Trudeau Foundation community before them – 58 fellows, 106 mentors, and 187 doctoral scholars over the past 13 years.

In announcing this year’s fellowships, Morris Rosenberg, the Foundation’s president and CEO, said: “The five 2015 Trudeau fellows work on issues that are fundamental for our society. Their research will help advance Canadian public policy by educating the public and stimulating evidence-based debate.”

"Ultimately, of course, this is all directed toward public policy aimed at enabling Canada to be a country that cares effectively – and deeply – for the dying."

“It’s time for us to shift and to be looking at some of the underappreciated other issues in end-of-life care that will contribute to the quality of dying in Canada,” says Downie. “I think we need to look at palliative care, we need to look at advance directives – how do we, in advance of becoming incompetent, make it clear what we want and ensure that we get the kind of treatment that we want, or we don’t get treatment that we don’t want. Ultimately, of course, this is all directed toward public policy aimed at enabling Canada to be a country that cares effectively – and deeply – for the dying.”

About the Trudeau Fellowships

The Pierre Elliott Trudeau Foundation fellowships were established in 2003 to encourage original initiatives and innovative projects that would not necessarily receive support through traditional funding mechanisms. Nominated by their peers and selected by an independent panel, Trudeau fellows come from all disciplines of the humanities and social sciences, and their research deals with one or more of the Foundation’s four key themes. Each fellow proposes a collaborative project in which other Foundation fellows, mentors, and scholars participate. The call for nominations for the 2016 fellowships is open until 27 November 2015 for regular fellowship candidates and until 11 December 2015 for candidates for a visiting fellowship.

About the Pierre Elliott Trudeau Foundation

The Pierre Elliott Trudeau Foundation is an independent and non-partisan charity established in 2001 as a living memorial to the former prime minister by his family, friends, and colleagues. In 2002, with the support of the House of Commons, the Government of Canada endowed the Foundation with the Advanced Research in the Humanities and Human Sciences Fund. The Foundation also benefits from private donations. By granting doctoral scholarships, awarding fellowships, appointing mentors, and holding public events, the Foundation encourages critical reflection and action in four areas important to Canadians: human rights and dignity, responsible citizenship, Canada’s role in the world, and people and their natural environment. For more information, visit www.trudeaufoundation.ca