When Kathleen McManus (LLB ’95) and Agnes MacNeil met for lunch in early March, they discussed organizing a continuing legal education session for government lawyers practicing public law. Over the next hour and a half, they came up with the agenda. The challenge was to make it happen with no budget.

McManus, senior counsel with Justice Canada’s Atlantic Regional Office, teaches a Crown law course that she created at the Schulich School of Law in 2003. “I know a few people at the law school,” she told MacNeil, managing lawyer at the Nova Scotia Department of Justice. “Maybe we can get a free room.”

McManus and MacNeil got a free room—and a whole lot more. The 40 to 60 people McManus hoped would register for the inaugural day-long Crown Law Symposium, which was held on June 12, quickly ballooned to 185 with a waiting list after registration closed.

“I had thought if we got 80 people to come, I’d be dancing on the roof,” says McManus. “We sent 25 to 30 emails to fill that room. Word spread like wildfire. It was a total grassroots movement.

There aren’t a lot of textbooks on Crown law in Canada. It was nice to have someone like Professor Diana Ginn, who talked about trends in administrative law and the big picture.
— Kathleen McManus, co-chair, Crown Law Symposium

The 10 speakers were a mix of law professors, judges, and practitioners. “There aren’t a lot of textbooks on Crown law in Canada,” says McManus. “It was nice to have someone like Professor Diana Ginn, who talked about trends in administrative law and the big picture.”

The diverse program appealed to participants, who mostly came from across Atlantic Canada. They hailed from justice departments, HRM, the Nova Scotia Health Authority, the IWK, law firms, attorney general offices, the RCMP, the Nova Scotia Utility Board, and beyond. Law students and articling students also attended.

Bringing Crown law ‘out of the shadows’ 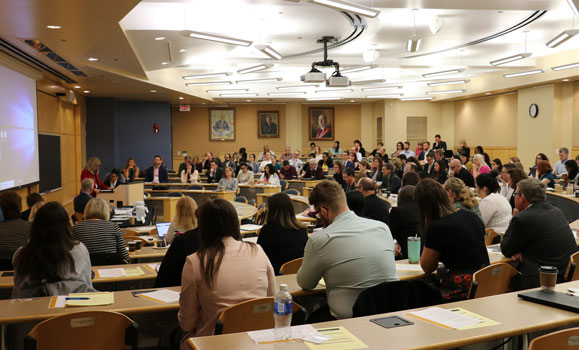 In her opening remarks, Karen Hudson (LLB ’85), deputy minister of Nova Scotia’s Department of Justice, summed up why the symposium was a landmark event. “We’re bringing Crown law out of the shadows. I don’t mean we’ve been operating in the dark, but there has been a dearth of focus on Crown law and what it means to be a Crown lawyer.”

Collaborating with Schulich Law was integral to the symposium’s success. “At the law school, we’re really interested in these kinds of partnerships,” said Cameron in her welcome address. “It’s great to be here and among you all. We’re delighted to be a partner in this venture.”

McManus can’t say enough about the assistance that she and MacNeil received from the law school, in particular from the Dean’s assistant, Elizabeth Sanford. “The services she delivered were seamless. It was a rapid coming together of people to make this happen. We felt that we could bring the people, but the law school brought the polish.”

Next steps for next year

McManus and MacNeil hope the attendees learned things that were helpful to their practice, and that they had interesting conversations with people doing similar work. “We wanted the sessions to be entertaining and educational,” says McManus. “There was a nice camaraderie and a sense of community, with dialogues going on in the room—that’s what you want.”

Having the chance to focus on Crown Law issues, together with other Crown counsel, was so helpful to my practice.
— Kevin Kindred, solicitor, Nova Scotia Department of Justice

Kevin Kindred, who works with the Nova Scotia Department of Justice doing labour, employment, and human rights litigation, benefited from the sessions. “The role of a government lawyer is truly unique, both in terms of the substantive law and the ethical issues we encounter,” he says. “A lot of the continuing legal education out there isn’t particularly helpful to our context. Having the chance to focus on Crown Law issues, together with other Crown counsel, was so helpful to my practice.”

The next step for the co-chairs is to review the questionnaires the participants filled out in order to help plan next year’s symposium. “I hope in five years that this will become a highly regarded national symposium,” says McManus.