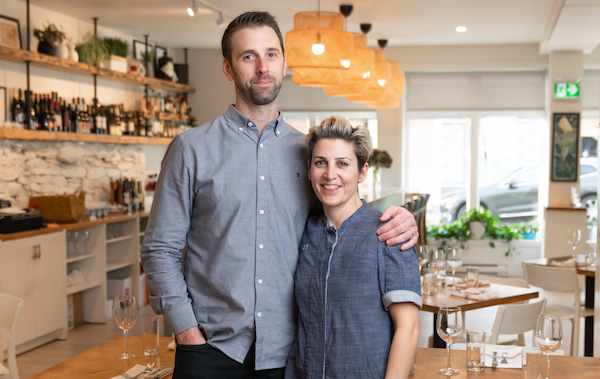 From the moment husband and wife restauranteurs Doug Townsend (BCOMM’04) and Renée Lavallée opened The Canteen, their Dartmouth-based eatery, in 2014, they looked for ways to make a difference and address food security in the community. But that effort took on a new dimension in March 2020 when the COVID-19 pandemic hit Nova Scotia.

“Like most restauranteurs, we had to shut down The Canteen and our other eatery, The Little C Take-Out, when the provincial state of emergency was announced,” Townsend recalls. “At first we worried about our future but soon we realized there were many people in the community who were even more impacted by the pandemic.”

Knowing they had a lot of food on hand that would soon spoil, Townsend and Lavallée took action. They reached out to The North Grove, a community hub that offers programs and services to address issues such as food insecurity in Dartmouth North, to see how they could be of help. Over the years, the couple have supported its mission as volunteers, and Townsend serves on its board. Together, they came up with a plan: The Canteen and The Little C Take-Out would transition into The Canteen Community Kitchen and provide meals to those in need.

“Our number-one value is community impact,” Townsend says. “Renée and I determined early on that we don’t need much to be happy. The possibility of owning a fancy car or multiple properties is not what gets us up in the morning. It’s the excitement of knowing we can have a positive impact in our community. The fact that we were able to help at a time like this was really satisfying.”

Supported by regular customers, North Grove, and Feeding Others of Dartmouth Society, which provides free nutritious meals to adults in need throughout the Halifax Regional Municipality, Townsend and Lavallée have been preparing hearty, nutritious and protein rich meals for distribution to families throughout the community.

“The goal was not only to keep people well-nourished but also provide them with something comforting and delicious,” Townsend says. “We consulted with the North Grove to determine what we would need, Renée worked out some recipes, and we figured out the logistics for preparing and shipping the meals. We ramped up our management team to oversee this work at both of our locations and our regular customers supported our efforts through donations. It all came together pretty naturally.”

To date, the community kitchen has provided 14,000 meals for people in need, and up to 500 a week at its peak. Feedback from the community, customers, and the partners who helped make it happen has been positive, and the effort earned a shout out from Prime Minister Justin Trudeau. More recently, its impact was recognized with an Aurum Award, which celebrates alumni like Townsend whose contributions strengthen communities. “That was really exciting,” Townsend says. “I don’t give back for the recognition, but I really appreciate it.”

Townsend says the goal now is to see how The Canteen and Little C can continue to address issues of food security in the community even as the eateries return to regular operations. “I think it’s going to be an evolution of what we were doing,” he says. “We want to find other creative ways to give back using the resources we have. Once we have a degree of normalcy return, we’ll look into that further. But it is important for us to do what we can and have an impact.”