Blanket Exercises: Increasing awareness of Aboriginal history at the Schulich School of Law

On September 19, 20, and 21, more than 100 first-year law students came together to explore the lasting impacts of colonialism on Canada’s Indigenous Peoples.

After removing their shoes, students joined upper years, faculty, and members of Dalhousie’s Law School Society (LSS) and Aboriginal Law Students' Association (DALSA) on a circle of blankets laid out on the Studley Gym floor. Participants were preparing for a Blanket Exercise, an experiential learning activity designed to increase awareness of Aboriginal history in Canada. Created in response to a report released in 1996 by the Royal Commission on Aboriginal Peoples, the “exercise can be a powerful way to teach about colonialism and its impacts as we strive towards reconciliation and decolonization,” says Professor Naiomi Metallic. It was her idea to incorporate Blanket Exercises into this year’s curriculum.

The Blanket Exercise for the law school started with a traditional smudging ceremony performed by Elder Geri Musqua-LeBlanc, a member of the Nakawe Nation (Keeseekoose First Nation), and Elder Deb Eisan, of the Batchewana First Nation in Ontario. After purifying the room, the two Dalhousie Elders in Residence acted as facilitators for the exercise along with Chris Innis, a volunteer at the Mi’kmaw Native Friendship Center from the Whitefish Island First Nation in Ontario. Together, they made introductions and outlined important terminology regarding Indigenous Peoples.

Role-playing can be visceral and emotional. The visual of the circle shrinking – some of the students commented on that being really powerful. You can intellectually appreciate that these facts happened, but it really touches you when you’re a part of it. – Professor Naiomi Metallic

Blanket Exercises involve three parties: facilitators, who act as narrators; participants, who put themselves into the shoes of Indigenous Peoples; and a European character, who acts initially as the British Crown and then later on as the Canadian government. Standing on blankets that represent the territory now known as Canada, participants walk through 500+ years of history split into four themes: pre-contact; early contact and treaties; colonial governance and Indian residential schools; and Indigenous rights, resurgence, and contemporary colonialism.

Participants are given scripts explaining key aspects of Aboriginal-settler history. Some are given cards that represent death from smallpox or relocation to residential schools (which is learned later on). As the exercise progresses, along with narration from the Elders and European character, participants contribute to the story by reading their scripts as directed.

Schulich students and faculty started on a large surface covered in many blankets. The blankets represented Turtle Island, and participants were allowed to roam freely over the territory. The introduction of the European character, portrayed by Chris Innis, quickly changed the dynamic of the group. The consequences of his arrival – namely assimilation, disease, and death – resulted in participants being removed from the blanket. As territories were taken away and First Nations Peoples were relocated to reserves and residential schools, the blankets underfoot were folded and removed. Very few blankets – and participants – remained at the end of the exercise. 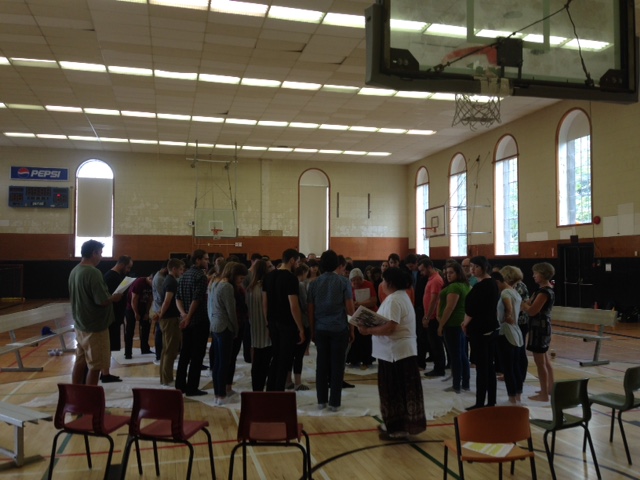 Assistant Professor Naiomi Metallic is the inaugural Chancellor's Chair in Aboriginal Law and Policy at the Schulich School of Law.

“Role-playing can be visceral and emotional,” says Metallic. “The visual of the circle shrinking – some of the students commented on that being really powerful. You can intellectually appreciate that these facts happened, but it really touches you when you’re a part of it.”

The role playing aspect of the Blanket Exercise is complemented by a talking circle. Students and faculty were asked to express the thoughts and emotions that surfaced as a result of the activity.

“The students were really engaged, and many expressed thanks for having the opportunity to participate,” says Metallic.

The Schulich Blanket Exercise came at a key moment for the law school. A committee is currently working to implement the Truth and Reconciliation Commission Report, in particular Call to Action 28:

"We call upon law schools in Canada to require all law students to take a course in Aboriginal people and the law, which includes the history and legacy of residential schools, the United Nations Declaration on the Rights of Indigenous Peoples, Treaties and Aboriginal rights, Indigenous law, and Aboriginal–Crown relations. This will require skills-based training in intercultural competency, conflict resolution, human rights, and anti-racism."

“This is certainly something that was in partial fulfillment of the report, at least in the interim while we’re trying to figure out more broadly what we’ll be doing,” says Metallic. “Overall, I’m quite pleased about the student engagement, the faculty engagement, and the support from the Dean and the law school.”

Metallic is looking forward to organizing the Blanket Exercise again next year. If possible, she will use this year’s results to inform the work she’s doing on the TRC committee.

To learn more about Blanket Exercises, check out the video below produced by KAIROS Canada, an organization dedicated to the causes of ecological justice and human rights.