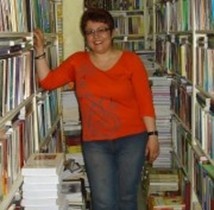 “Knowledge cannot be transferred; it must be learned.” (Arabic proverb)

I started learning Arabic by pure intellectual curiosity when I was 18. My dream at that time was to study Japanese, but courses for beginners in this language were not offered in that academic year I began my studies at  the Faculty of Foreign Languages and Literatures, Bucharest University, Romania. Learning Arabic seemed to be as big a challenge for a non-native speaker – even if it was not quite a dream – and, gradually, acquiring a difficult language, discovering a fascinating cultural area, the charming pre-Islamic poetry, then modern literature, medieval philosophy, the rich and advanced linguistic thinking, all this converted curiosity into effective interest and passion.

My education is mainly linguistic; I have an undergraduate degree in Arabic (Major) and French (Minor) and a Ph.D. in Arabic linguistics (Bucharest University); specialization in Arabic grammar and rhetoric (Cairo University, Egypt), a doctoral documentation fellowship (the Jordanian University in Amman, Jordan) a postdoctoral research fellowship granted by Maison des Sciences de l’Homme (France: Paris and Aix-en-Provence). However, my interest in Arabic literature has been constant and delightfully complementary: I translated into Romanian and published Arabic poetry and prose, and my doctorate thesis applies linguistic analysis (such as speech acts theories) of the exclamatory sentences to literary texts of two famous Arab writers: the Lebanese-American,  Jubran Khalil Jubran, and the Egyptian, Naguib Mahfouz.

At Dalhousie University I currently teach Modern Standard Arabic for Beginners, Intermediate and Advanced levels, A Cultural Introduction to the Arab World, a course on Pre-Islamic poetry, and a course devoted to language improvement through literary readings (Advanced). Before taking up the appointment at Dalhousie in 2005, I also taught various courses in Arabic studies for both native and non-native speakers: syntax; pragmatics of modalities in Standard Arabic and Egyptian dialect; Egyptian dialect; History of Arabic literature; Modern and Contemporary poetry.

I am particularly interested in enunciation theories within the Classical texts of the Arabic Grammatical Tradition which I read and interpret from the perspective of modern theories of pragmatics (speech acts, discourse strategies); another interest is the study of the Arabic Eastern dialects from the perspective of semantics and pragmatics (grammaticalization, modalities and interaction strategies). I believe that the Arabic Classical grammatical theories represent a worthy and valuable part of the humanity’s linguistic thinking and that the varieties of Arabic spoken in the daily life offer an exciting study material by itself as well as in connection and comparison with the Classical Arabic and Modern Standard Arabic.