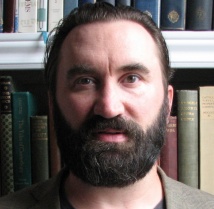 For more on Jack Mitchell, please visit his personal website at www.jackmitchell.ca.

A native of Sackville, New Brunswick, I grew up in Ottawa.  I received my B.A. (Hons.) in Classics from McGill in 2001 and my Ph.D. in Classics from Stanford in 2006.  I taught briefly at the College of the Holy Cross in Worcester, MA, worked for the Perseus Project, and have been at Dalhousie since 2010.  I live in Halifax with my spouse and two children.

I teach undergraduate classes at Dalhousie in Roman history, the history of ideas, and Greek and Latin language at all levels.  My regular rotation of Roman history classes includes Roman Legions and the Barbarians; Death, Sex, and Gold in the Ancient Roman World; and The Fall of Rome: Caesars, Saints, and Warlords.  In the past I have taught a yearlong first-year Writing Requirement class called Ancient History: God-Kings, Spartans and Caesers.  For our MA students and senior Honours students I have taught two seminars, on Ancient Media: From Bard to Manuscript (2014) and on Authors Outside the Canon (2015), on Sappho (2018), and on the culture of ancient oratory (2019).  Ancient authors I have taught in Greek and Latin language classes include Homer, Sophocles, Lucretius, Catullus, Horace, Cicero, Caesar, and Apuleius.

The principal focus of my research has been on the role of the ancient canon in Roman literary education, and particularly on how the tradition of literary performance survived there and influenced the approach taken by ancient scholars in their analysis of classic texts; this was the subject of a long article I published in the American Journal of Philology in 2015, and I have also written about how literary performance can condition our perception of Suetonius' Twelve Caesars as protagonists of his biographies.  I have also contributed to the theory of translation, using Gerard Manley Hopkins as a lens through which to understand the culturally embedded character of compound epithets in traditional oral poetry (focusing on Bacchylides), and on William Morris as an illuminator and translator of Virgil.  Finally, as I began scholarly life as a Homerist, I have examined the "bardic" nature of the soothsayer Theoclymenus' role in the Odyssey.  These articles are all available for download.

Original poetry and prose
In September 2021 I published an 8000-line version of the original Star Wars film trilogy as a blank-verse epic poem, The Odyssey of Star Wars (from Abrams Books).  My earlier project i epic poetry was a revival of Homeric performance epic, tackling the Battle of the Plains of Abraham (1759) in an hour-long work in iambic octameter, with which I twice toured Canada.  I have published three Young Adult historical novels set in ancient Rome, The Roman Conspiracy, The Ancient Ocean Blues, and Chariots of Gaul.  I have published a collection of original aphorisms (D, or 500 Maxims, Aphorisms, & Reflections) and have translated the maxims of La Rochefoucauld.  Since April 2021 I have been publishing a daily poem in Per Diem, the newsletter of The Hub, a nonpartisan forum for the discussion of Canadian public policy, sometimes on frivolous and sometimes on serious subjects.

I am active as a translator of ancient poetry into contemporary rhyming English verse, with a focus on Juvenal and Propertius, and enjoy writing poems in Latin.