Dalhousie University is proud to recognize and celebrate African Heritage Month with a series of events throughout the month of February. 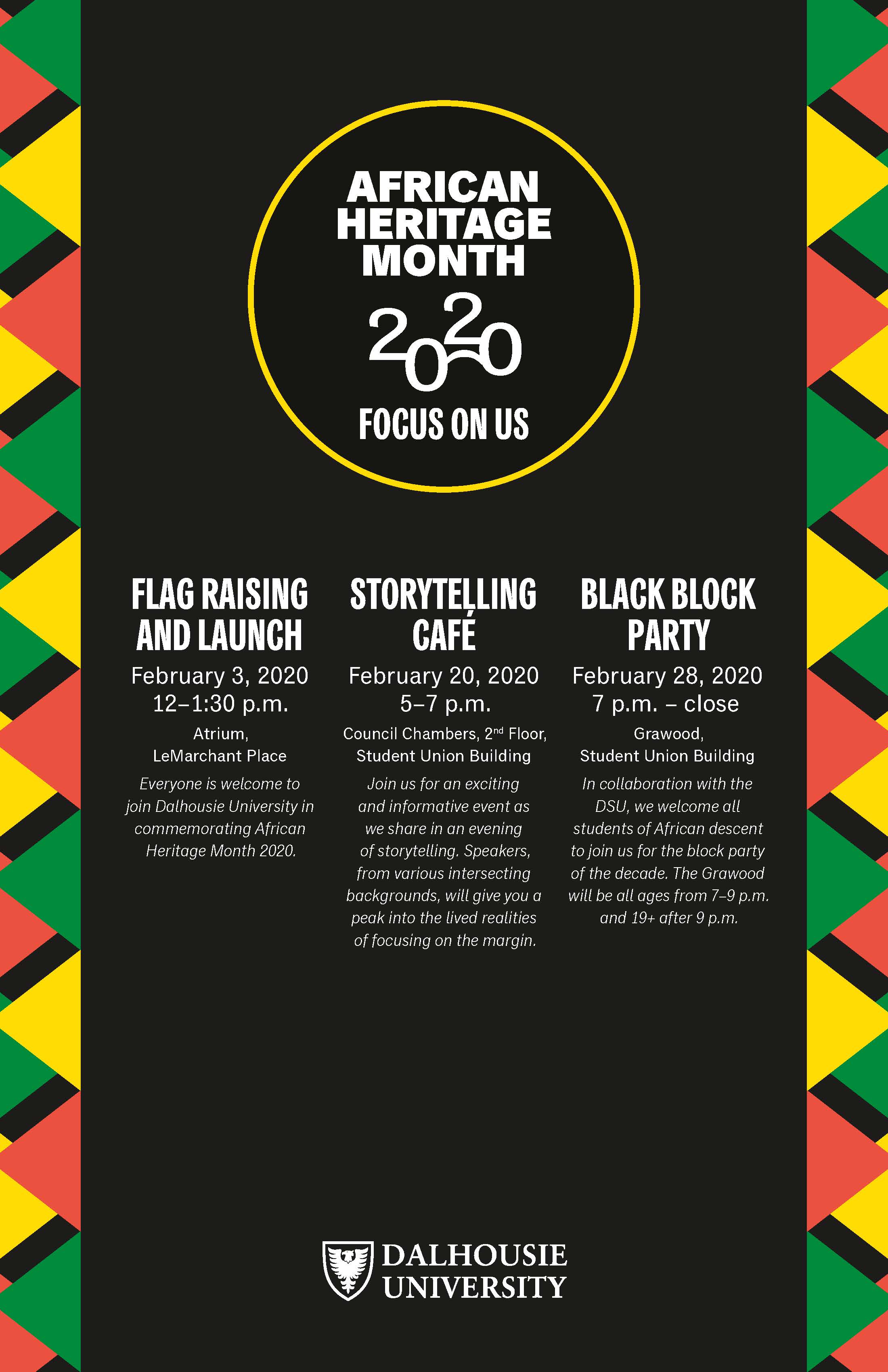 If you have any questions, concerns, or ideas for collaboration, please contact HRES@dal.ca

The commemoration of African Heritage Month can be traced back to 1926 when Harvard-educated Black historian, Carter G. Woodson, founded Negro History Week to recognize the achievements of African Americans. Woodson purposefully chose February for the birthdays of Frederick Douglas and Abraham Lincoln, both key figures in the emancipation of enslaved Blacks. In 1976, as part of the American Bicentennial celebrations, Negro History Week was expanded to Black History Month.

The vast contributions of African-Canadians to Canadian society have been acknowledged informally since the early 1950s. However, Nova Scotia, particularly the Halifax Region, has been a leader in the promotion and awareness of African Heritage Month. Highlights of the development of Black History Month in Canada through the efforts of Nova Scotian trailblazers include the following:

It is important to note that Nova Scotia and the Black History Month Association set the path for Canada in the recognition of African Heritage Month. Further, the significance of this influence as one of national proportion in the following occurrences compels recognition:

(The dates below reflect events happening in 2020.)

Organized By: ONE North End

The upcoming African Heritage Month event combines the opportunity to mingle, network and hear from young African Nova Scotians paving the way in their professional fields. Join us on the first Saturday of this celebratory month as we hear from and lift up youth in the community pursuing leadership roles in fields that have historically left out African Nova Scotian voices.

Everyone is welcome to attend, including little ones. The gathering will start with light food and the chance to speak with organizations that support young people pursuing careers in music, health, politics and other fields. We will then hear from a panel of young African Nova Scotians on professional paths that have been paved by those who came before them.

Please join us to celebrate the past and present of young African Nova Scotians leading through excellence while we create space to hear from organizations that want to support future leaders in the community.

We are the community of St Martin de Porres - people of the African diaspora living in Nova Scotia that celebrate a monthly Catholic Mass rooted in African traditions.  We will have a moment of silence to remember our African ancestors who were lost at sea and for those who survived the trans atlantic slave trade.

Beware you may want to dance.

African Heritage Month 2020 : Focus on Us
Flag Raising and Launch

Everyone is welcome to join Dalhousie University in commemorating African Heritage Month 2020.

Join BSAC as they celebrate 30 plus years as the "Home Away from Home" for all students of African Descent through a story line event with Dr. Renee Horton who has excelled in her career despite going through many obstacles in her journey. She graduated with a Ph.D. in Material Science with a concentration in Physics from the University of Alabama as the first African American to receive this degree. Dr. Horton serves as a NASA Space Launch System (SLS) Quality Engineer at Michoud Assembly Facility (MAF) in New Orleans. Throughout her academic career, Dr. Horton, has received numerous accolade and awards including the Black Engineer of the Year Trailblazer Award in 2011. Dr. Horton will be sharing her story of success, challenges and future aspirations to our students to encourage them in their educational journey. Join us for an evening of empowerment while celebrating BSAC's many years supporting black student success!

Topic: The Power of Believing in Yourself: Reflections of a Rocket Scientist

Refreshments will be served

Making It Count: Assessing the Impact of the Decade for People of African Descent on Policy in Nova Scotia.

This panel will feature experts from the African Canadian community who will discuss the N.S. government's Count Us In report and its implications on policy-making efforts in Nova Scotia.

In 2014, the UN declared the years 2015-2024 as the International Decade for People of African Descent.  In 2017, the UN Working Group of Experts on People of African Descent visited Nova Scotia as a part of their report on the welfare of Black communities in Canada. The Working Group found that, in this province, people of African descent are still suffering from the historical and contemporary effects of racism, segregation and discrimination. This report, combined with the advocacy of community groups including the DPAD Coalition led to the Prime Minister and the Premier acknowledging the Decade. Both federal and provincial governments committed to addressing anti-Black racism.

Nova Scotia is the first province in the country to release a policy framework designed to respond to the Working Group's report. With the release of Count Us In, Nova Scotia's Action Plan for the Decade for People of African Descent, the province has an opportunity to embark on a critical conversation about the best policy approaches to address anti-Black racism and discrimination.

This event is hosted by the MacEachen Institute for Public Policy and Governance with support from the Dalhousie Black Students Advising Centre, The Dalhousie Community of Black Students in Nursing and The Health Association of African Canadians.

Organized By: Canadian Museum of Immigration at Pier 21

Join us for the opening to see the new exhibition, enjoy presentations about the history of the Jamaican community in Nova Scotia, sample Jamaican food and hear musical performances.

Jamaican Nova Scotian Connections: From the Maroons to the Present Day is a Community Presents exhibit by the Jamaican Cultural Association of Nova Scotia. This special exhibition explores the growth and contributions of the oldest Jamaican community in Canada.

“Reparations!” Exploring a Basis for a Claim

Community leaders Lynn Jones, Dr. Rachel Zellars, and guests explore the basis for a Reparations claim, through their research, activism, and materials from the Lynn Jones African Nova Scotian and Diaspora Heritage Collection.

Turning Passion Into A Profession 2

February is Black history month, the significant of this event goes beyond heritage celebration; it is a month for celebrating inclusion and diversity.

During the two world wars and other wars, Canadians of African descent volunteered to serve, defend and protect Canada, some of them paid the greatest sacrifices to keep the democracy you and I are enjoying today in this country and elsewhere. At the end of these wars, they were denied the heroism recognition bestowed to their anglophone and francophone counterparts, those that were lucky to return home alive were excluded from the victory parades organized to appreciate and recognize their service to our country.

AFACS is marking the 2020 Black History Month with activities on Saturday February 8, 2020 at the Rosaria Hall, Mount Saint Vincent University, Halifax. This event will honor and showcase the activities of African Canadians me]n and women that served during the wars. The activities include historical presentation, cultural performances and full course dinner.

Free cooking-demonstration class - please register in advance to reserve your seat as spaces are limited to 16 participants.

Parents, educators, students, and life long learners have been invited by the ALI to sit as a panel and discuss what is needed to nurture academic, cultural, and personal success for African Nova Scotian learners in public educational institutions.

Presented by TD and in partnership with the

I Want To Make Myself: Evelyn White on Toni Morrison’s Sula

Organized By: Canadian Museum of Immigration at Pier 21

In honour of African Heritage Month, we welcome internationally acclaimed Canadian author Esi Edugyan to speak about her experience writing the Giller Prize-winning novel, Washington Black and answer your questions. Book sale and signing to follow.

Join us for an exciting and informative event as we share in an evening of storytelling. Speakers, from various intersecting backgrounds, will give you a peak into the lived realities of focusing on the margins.

Affirmations of Black Loyalists is an illustrative story that draws attention to a military unit known as the Black Pioneer Corps, following their detailed journey from America to Nova Scotia, and the untold stories about settling in this province.

Organized By: The Canadian Association of Black Journalists

J-School Noire is Empowering the Next Generation!

The Canadian Association of Black Journalists is pleased to announce the creation of J-School Noire, a media training and mentorship session being held on Tuesday, February 25, 2020 at Nova Scotia Community College’s Ivany campus in Dartmouth. It’s a partnership with NSCC, University of King’s College and Global Halifax.

Brian Daly, Atlantic Director at the CABJ, says now is the perfect time for young people to get involved in telling their own stories.

“The world needs to hear the voices of Black youth in Canada, whether it be as sportscasters, filmmakers, or social media influencers,” says Daly.

“Technology makes this easier than ever before. I want to see our young people create bold and exciting content that will drive the culture forward, as our people have done for many years.”

After completing J-School Noire, the CABJ will pair students with a senior journalist for yearlong mentoring as they begin their journey towards media careers.

- Provide an opportunity for youth to explore a career in journalism

- Inspire a new generation of storytellers.

- Foster a grassroots effort to increase the number of Black youth pursuing journalism.

Organized By: 2b theatre company

Get a behind-the-scenes look at the creative process as storyteller, playwright and award-winning author Shauntay Grant workshops scenes from a new theatrical work-in-progress, and talks about her poetic approach to playwriting.

Shauntay’s play The Bridge was produced at Neptune Theatre in 2019 in collaboration with 2b theatre company and Obsidian Theatre. She has received many awards and honors for written and performance works, and she served as Halifax’s third poet laureate. Shauntay's love of language stretches back to her storytelling roots in Nova Scotia’s historic Black communities. She teaches creative writing at Dalhousie University.

In partnership with the DSU, we welcome all students of African descent to join us for the block party of the decade. The Graywood will be all ages from 7pm – 9pm and 19+ after 9pm.