This resource list is designed to inform Dalhousie University's community. It was designed in the wake of George Floyd's murder with the aim of providing social and historical context to the events of the summer of 2020 and for generations past. This resource guide provides tools and resources to unpack issues of justice, race, colonialism, sexualized violence, and other forms of oppression. This guide provides links to articles, papers, books, social media channels, and videos about racism and activism in Canada.

Please note this is a non-exhaustive list of resources that we have compiled. We will be updating this list regularly. If you are aware of additional resources not included here, please contact the Educator Advisor, Amina Abawajy via HRES@dal.ca 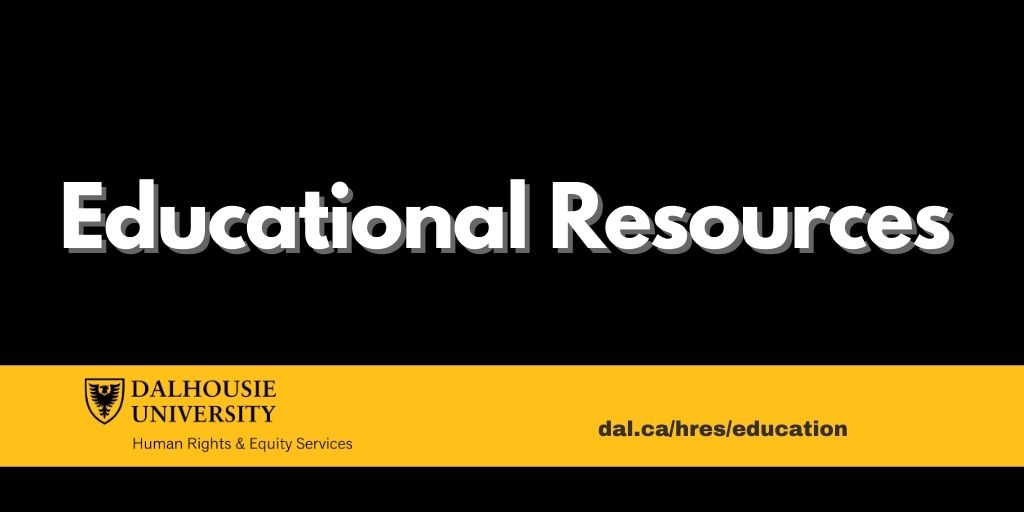 "Black Marxism: The Making of the Black Radical Tradition" by Cedric J. Robinson

Films that are problematic, and that follow 'white saviour' narratives:

"'Whiteness as Property" by Cheryl Harris

"The Racial Contract" by Charles Mills

"The Lived Experience of the Black Man" by Frantz Fanon

The Association of Black Social Workers

Into GoFundMe campaigns? There are options there, too!

Howard Adams – A Tortured People: The Politics of Colonization

Nick Estes – Our History is Our Future

Frantz Fanon – Wretched of the Earth

Shona Jackson – Creole Indigeneity: Between Myth and Nation in the Caribbean

Emma Laroque – When the Other is Me: Native Resistance Discourse 1850-1990

Lee Maracle – I am Woman

V.Y. Mudimbe – The Invention of Africa: Gnosis, Philosophy, and the Order of Knowledge

Leanne Betasamosake Simpson – As We Have Always Done: Indigenous Freedom Through Radical Resistance

Leanne Betasamosake Simpson – Dancing on Our Turtle’s Back: Stories of Nishnaabeg Re-creation, Resurgence and New Emergence

Huanani-Kay Trask – From a Native Daughter: Colonialism and Sovereignty in Hawai’i

Ngũgĩ wa Thiong’o – Decolonising the Mind: The Politics of Language in African Literature

Jodi Byrd – “Variations Under Domestication”: Indigeneity, Financialization, and the Logics of Dispossession

Erica Violet Lee – Our Bodies and Lands are Not Your Property

Invasion: In an Era of Reconciliation, Indigenous Land is Being Taken at Gunpoint (2019)

Glen Coulthard – Subjects of Empire: Indigenous Peoples and the ‘Politics of Recognition’ in Canada

Iyko Day – Being or Nothingness: Indigeneity, Antiblackness and the Settler Colonial Critique

George Dei – Rethinking the Role of Indigenous Knowledges in the Academy

Sarah Hunt – Ontologies of Indigeneity: The Politics of Embodying a Concept

Tryon Woods – The Fact of Antiblackness: Decolonization in the Chiapas and the Niger River Delta

Glen Coulthard – Subjects of Empire: Indigenous Peoples and the ‘Politics of Recognition’ in Canada

Iyko Day – Being or Nothingness: Indigeneity, Antiblackness and the Settler Colonial Critique

George Dei – Rethinking the Role of Indigenous Knowledges in the Academy

Sarah Hunt – Ontologies of Indigeneity: The Politics of Embodying a Concept

Tryon Woods – The Fact of Antiblackness: Decolonization in the Chiapas and the Niger River Delta

Trauma Stewardship: An Everyday Guide to Caring for Self While Caring for Others

Towards Transformative Justice: A Liberatory Approach to Child Sexual Abuse and other forms of Intimate and Community Violence

The Noonday Demon: An Atlas of Depression by Andrew Solomon

From the Ashes by Jesse Thistle

In My Own Moccasins by Helen Knott

We Have Always Been Here: A Queer Muslim Memoir by Samra Habib

Me, Myself and They: Life beyond the binary by Luna M. Ferguson

This One Looks Like a Boy: My gender journey to life as a man by Lorimer Shenher

"Demarginalizing the Intersection of Race and Sex: A Black Feminist Critique of Antidiscrimination

I Still Believe Anita Hill: Three Generations Discuss the Legacy of Speaking the Truth to Power by Amy Richards and Cynthia Greenberg

Not That Bad: Dispatches from Rape Culture by Roxane Gay

Yes Means Yes!: Visions of Female Sexual Power and a World Without Rape by Jaclyn Friedman and Jessica Valenti

Asking for It: The Alarming Rise of Rape Culture—and What We Can Do About It by Kate Harding

I Never Told Anyone: Writings by Women Survivors of Child Sexual Abuse by Ellen Bass

Consent on Campus: A Manifesto by Donna Freitas

Written on the Body: Letters from Trans and Non-Binary Survivors of Sexual Assault and Domestic Violence by Lexie Bean, Dean Spade and Nyala Moon

"The Sociology of Gaslighting" by Paige L. Sweet

"Sexual Assault on Campus: A Multilevel, Integrative Approach to Party Rape" by

"Mapping the Margins: Intersectionality, Identity Politics, and Violence Against Women of Color" by Kimberlé Williams Crenshaw

Aboriginal Women, Girls & the Continuum between Gender Based Sexual Violence and HT Link