As Nova Scotia climbs the ranks as one of North America’s fastest growing tech hubs, Dal makes moves to address the talent gap.

FOR THE FORMER Donald Hill Family Postdoctoral Fellow, Finlay Maguire, you could say the past two years have been busier than usual. His research focus is on public health, epidemiology and bioinformatics, and since 2020 has specifically focused on trying to understand and track COVID-19 using large biological datasets generated through a technology called genomic sequencing—a process that has come a long way thanks to the blending of knowledge in computer science and medicine.

“I've worked on the problem of trying to predict antibiotic resistance. The classic way of doing this in medicine would see you growing bacteria on plates and exposing it to different antibiotics to see which would work. That can take a long time, especially for slow growing things like tuberculosis,” Dr.Maguire explains. “Now thanks to advances in genomics and artificial intelligence, we can potentially diagnose resistance more quickly while also learning more about how it works and changes over time.”

Computer science techniques have had an impact on themanagement of COVID-19 over the past two years, but long before 2020 the health andmedical fields began to use advances in technology to make more accurate and efficient diagnoses, use patient data more effectively and design robust treatment plans.

“Over the last five years the number of computation positions and projects has really increased because everyone is now using computational tools to explain what is happening in the brain,” Dr. Hernandez-Castillo says. “Now the publications that are coming out are more around how machine learning and deep learning are being used to make models of diseases. The strong connection between medical fields and computer science is the way we are advancing knowledge.” 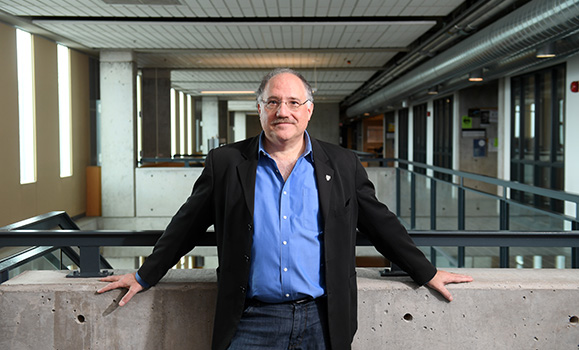 Dalhousie dean of Computer Science says Here We Code is a rallying cry.

WITH THE WIDESPREAD digitization of disciplines and industries, computer science knowledge and skills are in demand, and not only in fields that have been traditionally considered “digital.” Drs. Maguire and Hernandez-Castillo are two of the many researchers at Dalhousie working at the intersection of computer science and other disciplines. And this is only set to increase.

In recent years, with an expansion of the startup ecosystem—venture capital and government support have seen increases—the digital sector has grown rapidly in Nova Scotia. With a workforce of 26,000 and tech companies large and small either moving into Nova Scotia or starting up here, growth isn’t set to slow down. Today, the industry is worth over $2.5 billion and Halifax is climbing the ranks as one of North America’s fastest growing tech hubs.

Despite this growth, there remains a talent gap. Jobs significantly outnumber the volume of workers migrating to the province or students graduating from technology-related programs in the province. Recognizing this gap, last year the Province of Nova Scotia invested $16.8million to help Nova Scotia universities expand and enhance their computer science programs. Dalhousie received $13.3 million of this funding to increase faculty recruitment, research capability and student enrolment.

As the largest source of skilled technology talent in the province, Dalhousie is using this shift in Nova Scotia’s industry to aid in putting the region on the map. In November 2021, led by the Faculty of Computer Science with involvement from interdisciplinary partners across the institution, Dalhousie launched Here We Code.

The ambitious campaign hopes to position Nova Scotia as one of Canada’s top five digital ecosystems within the next five years, uniting institutions, students, industry, disciplines and the community at large to take advantage of the opportunities afforded by digital.

“Here We Code is a rallying cry,” says Andrew Rau-Chaplin, dean of Dalhousie’s Faculty of Computer Science. “While we are spearheading this, we are really just part of a much bigger puzzle. Through Here We Code, we want to showcase the digital success story of Nova Scotia, but also help to create a platformto aid further growth, collaboration and opportunities, particularly for youth across the province.”

For Dalhousie, this momentum presents opportunities to expand digitally focused education, research and partnerships. Over the next five years, Dalhousie will grow overall computer science enrolment to 2,500 students across undergraduate and graduate programs. The institution will also be doubling the number of computer science faculty members from the 50 currently employed.

The Faculty of Computer Science isn’t doing this alone, but rather in collaboration with other faculties across the institution. Central to this will be the hiring of cross-appointed researchers at key intersections. 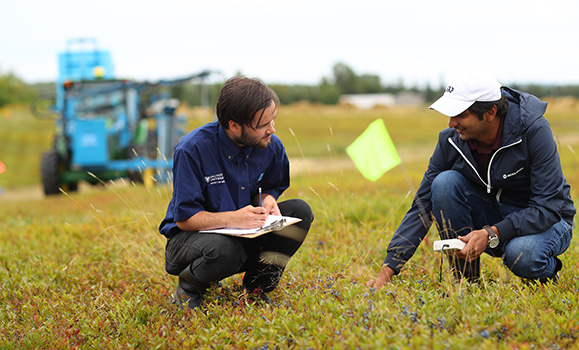 THE RISE OF DIGITAL innovation has radically changed the way in which some of Nova Scotia’s more traditional industries are doing business, creating opportunities that didn’t exist before across the province. From blueberry and apple farming to lobster fishing, the case studies range far and wide.

Take agriculture for example. What has historically been known as a labour intensive, physical discipline is rapidly becoming a big part of the technology sector with areas such as farming and aquaculture adopting digital tools and methods to become more effective and efficient.

“Sometimes interesting things happen where disciplines touch, but in the current space between computer science and agriculture there’s a significant overlap. We’ve been working with the key sectors of agriculture to identify the challenges that they’re facing and will be facing over the next 10 years. All of them have come back with slightly different lists but the one thing that’s effecting everyone is data and technology,” explains Dr. Gray.

“As a faculty, we’re looking at areas such as smart farming and it is all about leveraging data to make farming efficient. It touches pretty well every area of agriculture and uses digital applications across GPS, GIS, drone technology and AI. We are also one of only two universities in Canada that run an aquaculture program, and the aquaculture industry is quite progressive in relation to digitization, automation and utilization of data. There is a lot that we can learn from that industry.”

Key areas for expansion will include the exploration of cross appointments between agriculture and computer science, increased numbers of research students and postdocs working in this space, as well as plans to build on the work taking place through the Dalhousie-based Institute for Big Data Analytics.

The past few years have seen digital opportunities expand across the province through hubs such as the Verschuren Centre for Sustainability in Energy and the Environment in Sydney, N.S. The increased interest in technology and its applications at the Dalhousie Agricultural Campus in Truro demonstrates that the appetite for digital exists outside of large urban centres.

“We have seen an increase and an upgrading of the IT infrastructure in rural areas,” says Dr. Gray. “It’s become a tool for the farming and agricultural sector, creating opportunities that didn’t exist before because of digital adoption.”

Another traditional Nova Scotian industry that’s adopting digital extensively is the growing oceans sector. With the most ocean technology companies in Canada, the province is making its mark in supporting ocean sustainability on a large scale. 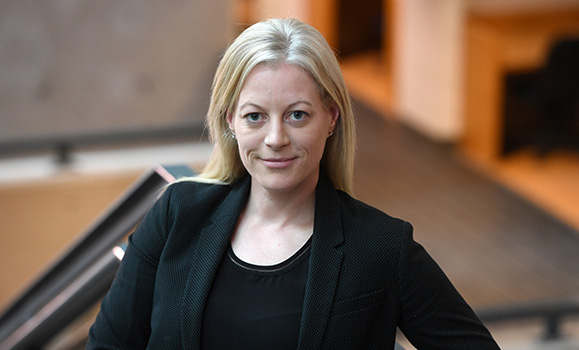 Jen Laplante of DeepSense works with ocean companies to to help them better understand how to create, use, adopt and optimize technologies. (Danny Abriel photo)

WHEN JEN LAPLANTE thinks about oceans, she can’t help but think about data. It’s not surprising given the executive director of DeepSense works with ocean companies day in and day out to use data in order to better understand impacts on the environment. Supported by IBM, the Province of Nova Scotia, the Atlantic Canada Opportunities Agency, the Ocean Frontier Institute, the Centre for Ocean Ventures and Entrepreneurship and Dalhousie, DeepSense connects companies with experts in AI and machine learning to help them better understand how to create, use, adopt and optimize technologies.

“Companies that typically haven’t been technology users or providers are realizing there is a significant advantage to expanding their data capability and making themselves more efficient through technology,” says LaPlante.

“If we use offshore wind as an example, leveraging drones to verify operations and identify any challenges with equipment saves significant manual time and effort. Using underwater cameras augment underwater inspections, allowing for data collection during less-than-ideal weather conditions. Data is collected around energy generation, network connections and so on. The example of offshore wind is similar to aquaculture or other systems operating on the water. There are entire ecosystems of data to collect and take advantage of as we shift to renewable energies and in Nova Scotia we’re very well positioned to take a leading role in this.”

The very real threat of climate change is making this need more pressing than ever before. As offshore wind power gains momentum, offshore oil and gas retirement becomes more important, and autonomous vessels become a near future reality, the opportunities for optimizing data and technology are exploding.

With this increased adoption across industries comes more jobs and an increased need for a workforce with the digital skills required to keep up. DeepSense connects computer science students from across the province with ocean companies through student-led exploratory data, AI and machine learning projects. It’s a model that matchmakes skills and expertise in oceans and technology to help companies use their data more effectively while providing students with crucial work experience and  onnections. Many of these students go on to secure work in the sector after graduation.

The importance of digital skills is being recognized in disciplines across the postsecondary landscape, with aspects of computer science increasingly getting integrated into curriculums across degree programs—something that Dr. Gray has top of mind when thinking about the future of agriculture at Dalhousie. He has plans to expand undergraduate computer science options to the Agricultural Campus through joint program offerings between the Faculties of Agriculture and Computer Science.

“There is a very real need for this to happen now,” says Dr. Gray. “One of our responsibilities is to ensure that students are ready for employment, and understanding computing, coding, artificial intelligence and these other areas is crucial now. Agriculture is a technology and data business, so for our graduates to be employable and successful, even if they’re going back into their family business of running a farm, they need to understand this. It’s a core competency.”

One hundred per cent of Dalhousie computer science students who complete a co-op or internship component of their program secure work on completion of their program, illustrating the very real need for skills and expertise. Steps to address this gap are very much under way. Initiatives like Here We Code support the ever-growing buzz around Nova Scotia as a destination for  migration and growth. With the province having recently reached the major milestone of surpassing a population of one million people, it’s clear that digital will play a key role in creating further momentum.

Previous: Time to Shine
Next: Music on the Mind