Grad profile: Outside the comfort zone 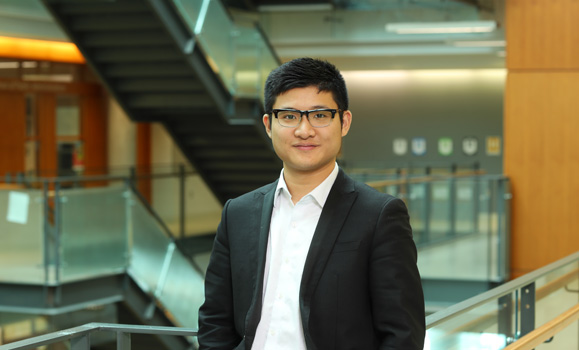 The most important advice Tiger Li has to share with other international students is to be open-minded, get to know Canadian culture and make new friends across the world. “We came a long way to study,” he explains. “The key is to work outside your comfort zone, get to know people, accept other ideas and work with classmates. I always come away with ideas and suggestions I hadn’t thought about before.”

“Take that first step and everything will be easy.”

Originally from Suzhou, China, Tiger still remembers arriving in Canada in April 2015, at the tail end of the worst winter Halifax had seen in a very long time. “I was terrified because the snow was up to my shoulders!” he laughs.

The new Bachelor of Commerce grad majored in accounting and minored in economics. He initially chose Halifax “because it has a very nice harbour,” he says, smiling. “It was a joke with my friends because when we Googled, Halifax was the second warmest city in Canada, after Vancouver.”

Tiger was also keen to participate in co-op work terms. His first was at Dal as the International Student Success Program Assistant in the Rowe School of Business. He conducted a survey of international students at Dal about their social and academic support needs. He attributes the success of the survey—he gathered 357 replies!—to giving out candies and offering photo ops with the Dal Tiger mascot. “I put together all the data gathered, and they still use that as a reference,” he says.

His second co-op was with exporting firm Alliance Transport as an export clerk, and his third was with the Rowe School as a marketing and communications assistant in the Dean’s office.

Transitioning to the workforce

Tiger says these co-ops prepared him well for the transition from student life to the workforce. “It was my first time working in the North American cultural environment. I learned how to interact with people, how to plan events, how to write formal emails. I can’t imagine that I could learn those crucial soft skills without the Commerce Co-op Program.”

Speaking of teamwork, Tiger “really loves” case competitions, and participated in tons of them. His team won first place in the Atlantic Throwdown two years in a row, competing with teams from universities across the Atlantic Provinces. He also took part in the Scotiabank Ethics in Action case competition, for which his team received an award for excellent participation.

As a volunteer, Tiger helped his professors by organizing study groups for international students. This “little volunteer group tutoring project” went on for two years and helped students struggling with language and unfamiliar accounting systems. “I was also a TA for Commerce 1101 and I really enjoy helping others. In the past few years, I have been in a similar spot and lots of people helped me overcome those difficulties. I know those challenges and I want to pass the help to students who also struggle.”

After a short trip home to China, Tiger and his parents will return to Halifax for his graduation. He has decided to stay in Canada, at least for a few years, and starts a job with Irving Oil in the CPA candidate program in Saint John, New Brunswick, on May 21. He’ll go through Irving’s rotation program, spending six months in each of four departments to prepare for a future role as a manager.

Tiger doesn’t seem the least bit worried about this new phase of his life. It’s just one more opportunity to get out of his comfort zone. “I love new challenges and like to learn new things. Be a Dal Tiger!”