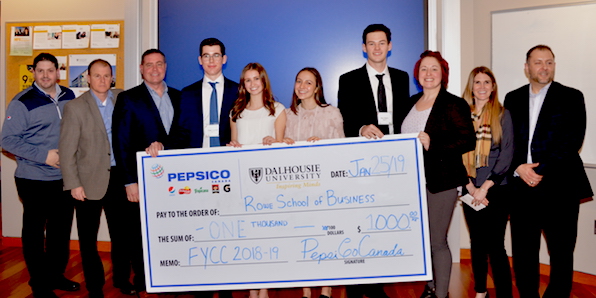 Fourteen teams of four first-year Commerce students competed in the 2019 First Year Pepsico Case Competition in January. Organized by Eryn Greene (VP Academic of the Dalhousie Commerce Society), Karen Mutyabule, Harrison Makaruk and Joshua Rankine, the competition is as an introduction to the world of case competitions for first-year students and a chance for them to learn from and be inspired by upper-year students. To help participants prepare, a team of fourth-year students offered a demonstration of a successful case presentation, and several Commerce students coached this year’s teams.

The judges were MBA students Corey Wheaton and Austin Krausert as well as Professor Oksana Shkurska. Six representatives from Pepsico, in its fourth year of sponsoring the competition, were present to announce the winners and present the prize money of $1000 to the winning team.