Posted by Rowe School of Business on February 10, 2014 in News

A team of four logistics students at the Rowe School of Business came in first this past weekend at the Denver Transportation Club's 33rd annual “Operation Stimulus” case competition. Unlike many other case competitions, where the students are given the case that day, in this one the students receive the case three weeks in advance and must do a tremendous amount of research and preparation in advance.

“'It was especially gratifying to me as an educator to be part of this year’s competition, as all of the Dal team and two of the Michigan State team members have been my students… a great weekend to be a professor,” said Dr. Dan Lynch, Director of Dalhousie's Centre for International Trade and Transportation. 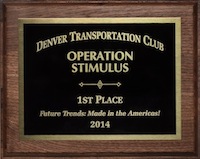 The case competition is part of an annual conference, Operation Stimulus, that brings together transportation and logistics professionals, academics and students. In addition to the opportunity to distinguish themselves in a field of leading business schools, the Dalhousie team members were able to attend a conference and hear presentations by, network with and interview with business leaders from companies such as CSX Railroad, the Nestlé Purina group, BNSF Railway, Crane Worldwide Logistics and Transplace.