Dal.ca Home
Home
News & Events
June
08
Ask an expert: How to avoid great white sharks and what to do if you encounter one

Ask an expert: How to avoid great white sharks and what to do if you encounter one

Great white sharks are the world's largest predatory fish, are often maligned and misunderstood, and are heading to waters near Nova Scotia. (Terry Gross photo/Wikimedia Commons)

Like it or not, great white sharks are wending their way north to begin their annual visit in Atlantic Canada and feast on their favourite snack — the region's abundant seal population.

The forbidding predator — best known for terrifying a generation of beachgoers with its outsized portrayal in the film Jaws — typically returns to the region from July to November and has seen its profile rise in recent years due in part to efforts to tag and track the movements of great whites.

The attention and increased sightings in the region have also stoked fears of great whites and made some people jittery about getting in the water, particularly after a woman was allegedly attacked by a young shark off Cape Breton last summer.

The developments motivated Vanessa Schiliro, a marine biology student doing her honours thesis on sharks, to educate the public on how to avoid shark encounters and what to do if you spot a shark in the water. She made a video (watch the full video at the bottom of this article) and infographic of shark-smart tips to keep both species safe, while dispelling myths around the long-lived animals and reassuring land lovers that sharks are not out to get them.

What inspired you to study great white sharks? 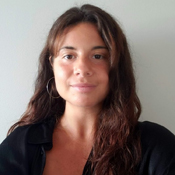 Since I was young, I was always drawn to the ocean and really captivated by the power and mystery of great white sharks specifically. I love to surf, dive with sharks and spend time in the ocean, but I recognize that there is a difference between a planned and unplanned interaction.

When I moved here, I started seeing a lot of headlines about the fact that great white shark sightings were increasing, and I realized that this could be intimidating for a lot of people. I started thinking about areas where we know great whites are frequent like South Africa, Florida, or Hawaii, and where there is a lot of community outreach just to educate the public about the basic do's and don'ts and I thought maybe there was a potential gap in that here.

I really just wanted to get people to know that great whites are here for a specific time and if we're spending time in the water, it's important to be mindful of the fact that we're sharing the ocean with these incredible animals.

What is the perception of great whites now? Has there been a shift in the way people view this species and what is the message you're trying to convey?

There has been such an important shift in recent years, especially after the film Sharkwater came out and with groups actively talking about how cool and important sharks are. I think the shift has engaged people's curiosity in wanting to learn more about them and challenge their own ways of thinking about sharks and I think that's incredibly positive.

More people care about the fact that sharks are endangered and recognize that they play a huge role in keeping our oceans healthy and balanced. We need to continue to “rebrand” the shark and get people to see that they are not mindless creatures as depicted by movies like Jaws or media headlines. They are incredibly intelligent and calculating animals. They don't just attack anything they see. If that were true, the number of attacks would be much higher.

The reality is that we are a bigger threat to sharks than they are to us. It is estimated that fisheries remove 100 million sharks from the ocean yearly, and this number might even be higher due to accidental fishing. I think public awareness of this issue and a change in how we think of sharks provide great momentum for making shark protection a priority, while hopefully creating shifts in human behaviour when it comes to how we treat them.

What does your video tell us about what people can do to avoid an encounter with great whites?

Sharks are primarily in Nova Scotia to feed on seals — we have a lot of them — and their population has been rising, so we want to be aware of where those seal colonies are and pay attention to their behaviour. If seals are not getting into the water that could be a sign that there is a shark nearby. Use that to inform your judgment — should I be swimming here, surfing here or even getting in the water?

Know your environment. If there are fishing activities nearby or animal remains in the water, you may not want to spend time in the water since those things attract sharks.

There are common sense things too, like avoiding swimming at dawn or dusk, avoiding murky and overcast conditions which make your visibility more challenging, not going out alone since groups can increase your vigilance and sharks are less likely to approach a larger group.

Great whites can’t distinguish colors and essentially see in shades of grey. Avoid shiny jewelry, which can look like fish scales or anything with high contrast as this can pique their curiosity. Certain surface-water activities, like paddle boarding or surfing, can increase the odds of a shark coming to investigate you as this outline resembles that of their favorite prey.

What can people do if they find a shark nearby?

If you do encounter a shark, don't panic. When we see a shark, it doesn't mean it's coming to attack you, it could just be cruising by. But if you do see one, you'll want to try to get out as calmly and as quickly as possible. One of the main things is to avoid frantic movements. Don't start splashing and yelling and making all of these movements because that could increase their curiosity to come in closer and see this thing that is acting like prey.

If you can, make sure you maintain eye contact because sharks are masters of stealth. The problem is not if you see the shark, it's if you don't. They're really good at being ambush predators, so keep your eye on the shark and make sure it knows you see it.

If a shark does come closer, you want to create buffer space so place your surfboard in between you and the shark or if you have a GoPro on a stick you can fend it off with that — anything that you can put between you and the shark. Observe the shark's behaviour too. If it's circling you, that could be a possible indicator that it's curious about what you are. If it's just swimming by calmly, then maybe you shouldn't worry and just exit calmly.

What has your experience been with sharks? 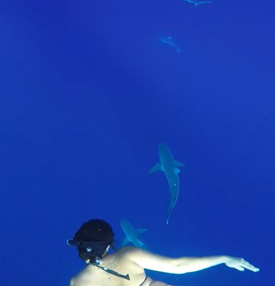 I've been in the water with about five different species of sharks so far. I like to free dive with sharks. One of my favourite encounters was in Jupiter, Florida, with a lemon shark called Miss Snooty, who is known on social media and is very special to me. There were two lemon sharks and six bull sharks around me and I'm still in one piece, so I think that sends a message that they're not mindless, and when it's planned and done safely it's actually beautiful to be around these creatures. I am in awe of the fact that they’ve been around for millions and millions of years surviving incredibly harsh environmental shifts, and saddened that the biggest threat to them is us.

There are courses taught on bear safety. For example, when we go camping and hiking, we know that bears could be out and we still go out and assume the risk. It's the same in the ocean — there are sharks here. It doesn't mean we need to be afraid. It just means we need to be a little more mindful of our behaviour, especially at times when we know they come to visit.

Humans and sharks have co-existed for thousands and thousands of years. There have been very few bad encounters — maybe two documented here — so it's not something to fear. We just need to be respectful and refocus our efforts in ensuring we're providing an optimal environment for sharks rather than destroying it and fearing them.

What You Should Know About Great White Sharks in Nova Scotia from Vanessa S on Vimeo.