Reports Thursday suggested shelling and bombs could be heard early in the Ukrainian capital of Kyiv, shown above during better times. (Oleksandr Zhabin photo/Unsplash)

Russia launched an invasion of Ukraine in the pre-dawn hours of Thursday, deploying troops to a range of points on land and sea while raining down missiles on communities throughout the country.

Reports suggested shelling and bombs could be heard early in the Ukrainian capital of Kyiv, where residents had begun fleeing or had hunkered down in shelters and basements. There were also indications that Russian troops had moved across the eastern border and into Kharkiv and Luhansk regions, while landing at the port cities of Mariupol and Odessa.

The move by Russian forces had been feared for weeks, amid warnings from Canada and the other NATO members that any incursion into Ukraine would be met with sharp economic sanctions and other punitive measures aimed at rebuking Russian President Vladimir Putin, who has said his aim is to demilitarize Ukraine. Putin also made clear in a televised address that any response from Ukraine's allies would "lead to consequences you have never seen in history."

What was your immediate reaction to news of Russia's invasion into Ukraine? 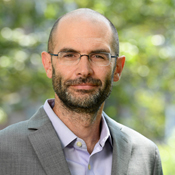 Ruben Zaiotti (pictured left): Moderate surprise. Russia has made it clear that a military attack on Ukraine was in the cards, but I was still hoping that diplomacy could have led to a different outcome or at least not a full-on invasion of the entire country, but here we are.

Robert Huish: It was a shock to wake up to a very different world on February 24 than on February 23. It is so hard to believe that one nation would invade the sovereign territory of another in 2022. Terrorist factions and failed states have been the focus of modern militaries for some 30 years, so to see an army invade the sovereign and internationally recognized territory of another is just unbelievable. I think that many in Ukraine, Russia and around the world figured that Putin would attempt some sort of destabilization by backing separatists and engaging in cyber-attacks and democratic interference. To see co-ordinated explosions in the entirety of Ukraine is an absolute shock. And to be clear, it’s not a shock because we didn’t think Putin had it in him, or that U.S. intelligence said it was coming, but it is a shock in the sense that it is unimaginable to have nation-to-nation war in 2022.

Why do you believe Putin chose to invade now and what is his end goal?

RZ: For Putin, this is an opportunity to shake up the strategic outlook in Europe, which he believes is not leaning in Russia’s favour. He perceives Ukraine as the western powers’ trojan horse, and the sooner the former Soviet Republic can be restrained, the better, whatever the political and economic cost will be. 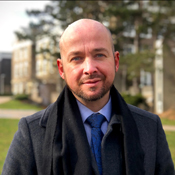 RH (pictured right): On the surface, Putin is worried about a functioning democracy in Kyiv and having NATO deeply involved in Ukraine. But this is just the surface. At the heart of it, Putin lives in a world of Russian nationalism that sees countries like Ukraine, and even Finland, as an affront to that vision. This is why he has pursued aggression in Georgia, Crimea and now Ukraine. What’s next? Keep an eye on parts of Europe that were once held by the Soviet Union that are not part of NATO. When a leader like Putin is living in such mythic nationalism, anything is possible. For now, his goal is destabilization in Ukraine. Many thought it would come through chipping pieces away from Ukraine, but now we’re seeing he is going for full-on chaos by wanting to “de-militarize Ukraine.” Putin is not a good communicator to diplomats, the international community or to his own country. But his forte seems to be calling bluffs and engaging in outrageous and absurd actions.

How capable is Ukraine of defending itself?

RZ: Ukraine does not have sufficient means to defend itself from a Russian military invasion. The Russians have substantially larger and better-equipped military capabilities. The real question is not what the Ukrainian military apparatus can do now, which is not much, but what type of resistance Ukrainians will be able to muster once Russia completes its invasion.

RH: Think along the lines of Afghanistan. Russia will face heavy resistance in urban areas in the west and south of Ukraine. Weapons are coming in from NATO to back up Ukraine's military and resistance fighters. NATO is likely to try to encourage sanctions to send support into Ukraine. The resistance will be well armed and it will get ugly.

What measures do you expect NATO members and the international community to enact?

RZ: Certainly not direct military support in terms of troops on the ground. This is out of the picture for the time being. It will be mostly about providing additional equipment to the Ukrainian army if it will remain functional, and boosting the defence of surrounding NATO countries, like the Baltic states and Poland.

RH: For now, we can expect more sanctions and more weapons to flow into Ukraine. However, sanctions are not necessarily effective when it comes to Russia. Russia’s economy is increasingly resistant to sanctions from the West. And often it can take months for sanctions to actually be enforced. Throw crypto currencies into the mix and Moscow is well ahead of the game in evading sanctions. Russia has also proved its eagerness and ability for cyber-attacks.  Will the west respond with cyber-attacks of its own? Let’s see.

What are the most effective means of rebuking Putin and also assisting Ukraine?

RZ: Economic sanctions have a patchy record when it comes to effectiveness. Putin has already factored them in his calculation on whether to invade Ukraine or not. And he has recently deepened Russia’s economic and political ties with China, which can provide a useful alternative to Western markets and resources. In the short term, the real impact of the imposition of economic sanctions is to show that the West offers a common front against Russian aggression. Putin has tried to divide the West in the past, with some success. The West seems united now in countering Russian actions. The big question is whether this front will crumble under pressure. Economic sanctions have an indirect effect also on the West and some governments might not be willing to suffer as a result.

RH: Sanctions in their current form do little. When a target is sanctioned, be it Moscow or even North Korea, there is always a broader network used to evade them. Effective sanctions would have to look at the broader environment the target operates in. And that’s tough to design, tougher to enforce and with Russia almost redundant. Russia’s economy is not in good shape, but it is insular enough to keep manufacturing going within the country.

What are the broader regional implications of this invasion? Could we see Russia set its sights on other countries?

RZ: The Russian intervention in Ukraine has potentially serious implications for the stability of Eastern Europe. After all, Putin has made no secret that his ultimate objective is to restore Russia’s role as a major power, and has used the Russian empire as a term of reference. The first step in this nostalgic journey is to bring back into the fold the entities that were part of the Soviet Union and that are now independent countries. Ukraine is the most coveted prize. Belarus is de facto already under Moscow’s rule. The Baltic states could be next in line. This is certainly not the end of the story.

RH: Yes! Finland should start thinking seriously about the presence of tanks on its borders in a year’s time. There’s no strategic reason for this. I mention Finland as Putin seems to have the same nationalist obsessions there as he does with Ukraine. This will disrupt the entire security framework of Europe and it will test NATO to the brink. Mind you, NATO has had time to see this coming and to prepare. If we begin to see that Putin’s intentions are less practical, and more or less grounded in distorted narratives of romantic Russian nationalism, it forces us to realize that anything is possible and readiness is needed for the unknown.