The Gordon A. Riley Memorial Lecture

The Riley series is funded by a combination of research funds and the financial support of alumni and other friends of the Department of Oceanography. 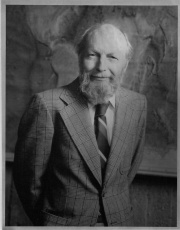 Gordon A. Riley was born at Webb City, Missouri on June 11, 1911 and died in Halifax on October 7, 1985. Originally an embryologist, he began graduate work in 1934 at Yale where he swtiched to limnology under the influence of the ecologist G. Evelyn Hutchinson. His work at sea, based at Yale and Woods Hole Oceangraphic Institution, began in 1937.
Riley pioneered the use of experimental methods and statistics to determine the causes of biological processes in the sea. In the 1940's he began to use differential equations to describe and analyze plankton dynamics, beginning quantitative modelling in biological oceanography. Later he worked on regional oceanography, transport and mixing, and particles in sea water, showing the originality that characterised his early work.
Gordon Riley became Professor of Oceanography and Director of the Institute of Oceanography (now Department of Oceanography) at Dalhouise in 1965. He retired as Professor Emeritus in 1976. His finest memorials are his many students, the department he led, and the inspiration that his scientific work still provides.