Faking It: The Impact of Fake News on Today’s Political Landscape 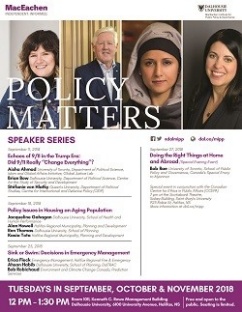 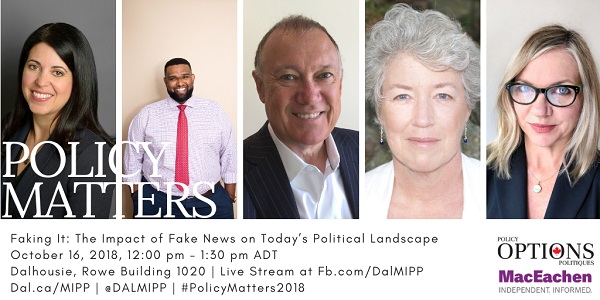 The MacEachen Institute teams up with Policy Options magazine to co-host a panel of media representatives who will explore the impact of the “fake news” phenomenon on the global political landscape. With a Twitter- happy US president giving new meaning to the term “fake news”, the business of fact-checking, mud-slinging, press-baiting, and election influencing by online trolls has come under considerable scrutiny and given rise to some fundamental questions about the role of the media and elected officials in democratic society. How is the weaponization of the term “fake news” by politicians intent on undermining media credibility, impacting the role of the fourth estate in doing its job - impartially reporting the news, analyzing the issues and keeping politicians “honest”? What impact is the rise of social media usage by elected officials to get directly to the voting public with their version of the truth, and online trolling by foreign entities trying to ride the wave and influence elections, having on the democratic discourse in North America? In the countdown to the US mid-term elections (November 2018) as well as a Canadian federal election (2019), a close look at the implications of the “fake news” phenomenon by our panelists couldn’t be more timely.

Policy Matters is a weekly panel discussion on major policy issues presented by the MacEachen Institute for Public Policy and Governance. Each discussion features thought leaders from civil society and focuses on one of the Institute's four research themes – Civic Engagement, Atlantic Canada and the World, Health Systems and Governance and Smart Infrastructure. Held each Tuesday from September 11 to November 6, the discussions take place in the Kenneth C. Rowe Management Building at Dalhousie, from 12:00 pm – 1:30 pm. The events are designed to encourage public engagement with local, national and international policy issues and are open to the public.