Wind at her back

Dr. Anya Waite navigates multidisciplinary waters in search of solutions to the challenges of climate change.

ANYA WAITE’S expectations for a life in research and academia didn’t start in a classroom or a lab. They were formed at the dinner table.

Her family’s dinner table in Halifax, to be more precise. There, her mother Masha—a biologist—and her father Peter—a Canadian political historian and renowned Dal professor—would frequently invite faculty colleagues over for drink, dining, and discourse. And from a very young age, Anya soaked it all in—minus the wine, of course.

“We had philosophy professors, economists, chemists, people from across the Dal community,” she says. “My father was one of the first in his family to get a university degree. So, for him, it was the joy of just being part of an intellectual community, where you could talk ideas. There was a lot of laughter—they took themselves seriously but not too seriously, and it rarely became didactic or fierce. It was a truly rich experience.”

Those memories stuck with the younger Waite as she pursued her own academic journey—not plowing into the study of parliaments and politics like her father, but diving into the world below the ocean waves, one of coral and currents.

After years as an acclaimed scientist and global community-builder in oceanographic research, Dr. Waite has found her way back to Halifax and Dalhousie, becoming the university’s associate vice-president research (ocean) and scientific director and CEO of the Dal-led Ocean Frontier Institute. Now, she’s the one hosting the table, so to speak, welcoming experts from across disciplines to apply their intellectual rigour and innovative thinking to some of ocean research’s greatest challenges.

“It really isn’t an overstatement to say Anya is dedicated to saving the world,” says Dr. Alice Aiken, Dalhousie’s vice-president of research and innovation and the one who recruited Dr. Waite to her current role. “She knows how important the ocean is to our climate future. From oceanographers and atmospheric scientists to legal and Indigenous scholars, she’s bringing together researchers uniquely qualified the world over to tackle the problem. And it’s only because of her excellence as a researcher and passion as a leader that she’s able to achieve that.”

THE PATH to where Dr. Waite is now has been anything but straightforward—more akin to the tossing of a current that, chaotic as it may seem in the moment, ended up exactly where it was supposed to be headed.

She started as a Dal music student before switching to a combined honours in English and Biology, unwilling to choose between the arts and the sciences. Over time, though, she was increasingly drawn to the natural world, doing an honours research project with biologist Bill Freedman and spending her summer tramping through rural Nova Scotia studying how forests regenerate after clear cutting. At that time, she was also volunteering with a marine ecology course and had the opportunity to do work on a research ship.

“And I immediately fell in love with being at sea,” she recalls. “The steel-toed boots, the hard hat, the whole thing. It was the teamwork on the ship that really got me— it’s amazing, everyone supporting each other, working really hard and pulling together.” 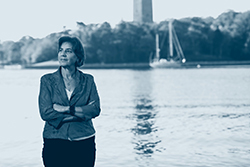 She’d spend the next couple of decades searching for ways to combine that sense of teamwork with the intellectual curiosity she valued so much. It wasn’t always easy. After completing her PhD in oceanography at the University of British Columbia, she secured a prestigious postdoctoral fellowship—and found the experience completely demoralizing.

“I grew up with the view that the whole point of being an academic is that you have good arguments, and you bring clear-headed thinking and creativity into these discussions. And instead, what I found was a community that was kind of seized up with the need to bring in big grant money and being worried about sharing ideas in case the lab next door might take them.”

It wouldn’t be the last time she found herself in a dispiriting career situation. Years later, as an environmental engineering professor in Perth, Australia, a leadership turnover led to her courses being dropped, her teaching load tripled, and coming face-to-face with the sexism that all too often has followed women in the sciences. She doubted her academic self-worth, her leadership, her research. It took escaping to a change of scenery in Germany to realize the problem wasn’t her.

“It was almost as if I went from pariah to princess,” she says with a reflective laugh. “Suddenly I was a female leader of a department which had never had a female leader. I was voted as the top professor to lead the Scientific Council of the whole organization. I got to travel around Germany championing ocean research for the Helmholtz Institutes, influencing the scientific direction of an entire country.”

Ever since, she’s been lucky to work with female leaders she calls “the wind at my back.” She’s steadfast on her commitment to ensuring debate and discourse is fair, collegial, and intellectually empowering. And the experiences inspired advice she often gives to young women entering a career in research: don’t neglect your politics.

“Map your landscape. You’re never above the politics. Map the mountains. Map the passes. ‘Here be dragons.’ Who are the gatekeepers? Ask those questions about the political landscape you’re working through because you may have to dodge someone, you may have to climb over a pass. All those things are necessary to succeed.”

Dr. Waite returned to her alma mater at a time when Dal is truly making waves in the field.

Ocean research initiatives hosted at Dal—like the marine-life surveying Ocean Tracking Network and ocean-risk assessing Marine Environmental Observation, Prediction and Response Network (MEOPAR)—are linking Dal experts with like-minded colleagues and institutions around the globe. The university’s research strategic direction places “sustainable ocean” as one of its five central pillars, with an ocean research strategy (launched in 2021) that positions Dal as “a global leader in solving ocean challenges through excellence in research, graduate education and innovation.” 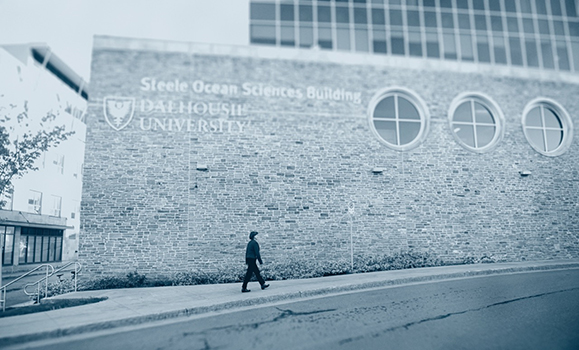 Dr. Waite says she’s been lucky to work with female leaders she calls “the wind at my back.”

A BIG part of that vision is the Ocean Frontier Institute (OFI), a $220-million partnership led by Dalhousie, Memorial University of Newfoundland, and the University of Prince Edward Island. Launched in 2016, the institute funds and supports research focused on the North Atlantic and Canadian Arctic Gateway, from understanding atmosphere-ocean interaction to developing sustainable, competitive ocean technologies and solutions. Since taking over as OFI’s scientific director in 2018, Dr. Waite has worked to enrich the institute’s activities—growing multidisciplinary research, strengthening Indigenous engagement, and pushing boundaries into new frontiers. She cites the Sustainable Nunatsiavut Futures project as a great example: a collaboration that uses both community-engaged research and scientific methods to co-produce knowledge on how climate change impacts Northern communities that depend on marine resources.

“Here’s a type of project that wouldn’t necessarily happen without OFI—or if it did, it probably wouldn’t happen the same way,” she explains. “It’s probably the biggest project of its kind, blending traditional western science and Indigenous knowledge in a way that focuses not only on traditional academic metrics, like papers, but on how well this research aligns with the local communities. How is the conversation going? That’s critical.”

Among the conversations Dr. Waite is most focused on right now is one that might be her largest to date: a proposal for a new Dal-led research collaboration called Transforming Climate Action. The project, in partnership with the Université du Québec à Rimouski, Université Laval, and Memorial University, is seeking funding from the Canada First Research Excellence Fund at a scale larger than anything in Dal’s history. Its vision: to provide critical data and insight to Canada and other countries about the critical role the ocean plays in responding to and managing global climate change—perhaps the most existential challenge our society, and our planet, is facing.

Further reading: Transforming climate action: Dalhousie’s push to put the ocean at the centre of the global climate conversation

“The ocean is not well understood as a climate actor, by policy makers or the broader public,” explains Dr. Waite. “We think of it as a victim—‘the poor ocean, it’s hurting under climate change’—but the ocean actually controls climate. It’s a carbon sink. And if countries like Canada are going to meet our global climate targets, if we’re going to achieve net-zero carbon emissions, what we’ll need is a significant push for ocean observation, making sure we fully understand the ocean’s carbon cycles and working to better predict the future climate.”

The project is already attracting support and partners around the world as it ramps up, and Dr. Waite is proud that the spirit of collegiality and collaboration that’s been foundational to her career is all over the proposal.

“We’re creating a space for researchers to talk ideas, where their ideas are going to be valued. We don’t always get it right, but we try. The whole aim of the proposal was to create a space for intellectual excitement, and we want to continue to do that going forward. And we’re really looking to engage the next generation of researchers to take charge of this and push it forward.”

Over the longer term, she hopes to see the next generation of scientists fully at the helm.

And where will that ultimately leave her? “My hope would be that I will always contribute to a constructive, active dialogue: ‘Let’s have that exciting conversation. Let’s talk science. Let’s have the inspirational discussion over a glass of wine that’s going to help envision the next transformative action.’”