Dalhousie is one of four Canadian universities participating in the Montreal school’s national ceremony this year via a live video-link broadcast. (Cristian Bortes/Flickr photo)

Shortly after arriving at Dal to study Engineering in the fall of 2016, Sara Evely signed up to help out at an event being organized by the Women in Engineering (WiE) society. She knew little about the gathering at the time, except that it was to mark the National Day of Remembrance and Action on Violence Against Women on December 6.

As Sara learned more, she came to realize that the event was intended to commemorate a particularly horrific moment in Canada's history — the tragic murder of 14 women at an engineering school in Montreal in 1989 by a man who claimed to be "fighting feminism."

“It wasn’t until I was actually in the ceremony that I had a concept for the magnitude of loss," she says of the École Polytechnique shootings, one of the most extreme acts of violence towards women to ever take place in Canada.

Sara, like many current Dalhousie students, was born after the tragedy and so didn't have a living memory of it. Participating in the Dal memorial each year has become an important part of the 27-year old's own efforts to commemorate the victims each year and to pass on knowledge about it to the next generation of students.

Victims of the shooting included 12 engineering students, one nursing student and a budget clerk from the finance office.

This year, to mark the 30th anniversary of the shootings, École Polytechnique reached out to a collection of universities across the country, including Dal, to organize an even more meaningful memorial. Dal is one of a handful of universities participating in the Montreal engineering school’s national ceremony this year via a live video-link broadcast, which will capture the illumination of a spotlight near the Dec. 6 commemorative plaque on Sexton Campus downtown. École Polytechnique’s own annual ceremony typically involves the illumination of 14 spotlights into the night sky, each signifying a victim.

The spotlight portion of this year’s event will take place outside the Alumni Lounge near the plaque, following a non-televised portion of the memorial starting at 5:30 p.m. in the Irving Oil Auditorium in the Richard Murray Design Building. Erica Kelly, a chemical engineering student from Montreal, will read a brief summary of the event as it happened at École Polytechnique and bring relevance to current students.

“A lot of people don’t even know the extent of the tragedy and what happened,” says Sara, this year’s WiE president.

Rather than focus exclusively on the tragedy, Sara says this year’s ceremony will also bring a message of resilience.

Attendees will hear from Amyl Ghanem, a chemical engineering professor at Dal who now leads the Faculty's work on equity, diversity and inclusiveness as an assistant dean. Dr. Ghanem actually met a couple of the victims when they came to what was then the Technical University of Nova Scotia (predecessor to today’s Faculty of Engineering) on a school trip.

“She is the same age as all of them,” explains Sara. “It’s an embodiment of a loss, yet she’s going to be the one who delivers a message of resilience and how she’s proud to see all the current students still carrying the torch and keeping the message of perseverance and determination in the face of adversity alive.”

It’s that sort of determination that Sara feels each year as she prepares to remember again.

"Every year, it just empowers me a little bit more," she says. "It’s like, ‘Yeah, you know, this is a problem.' I didn’t even know it was a problem being a woman in science before that. It definitely does bring relevance to the society and prove the fact that this is a needed event." 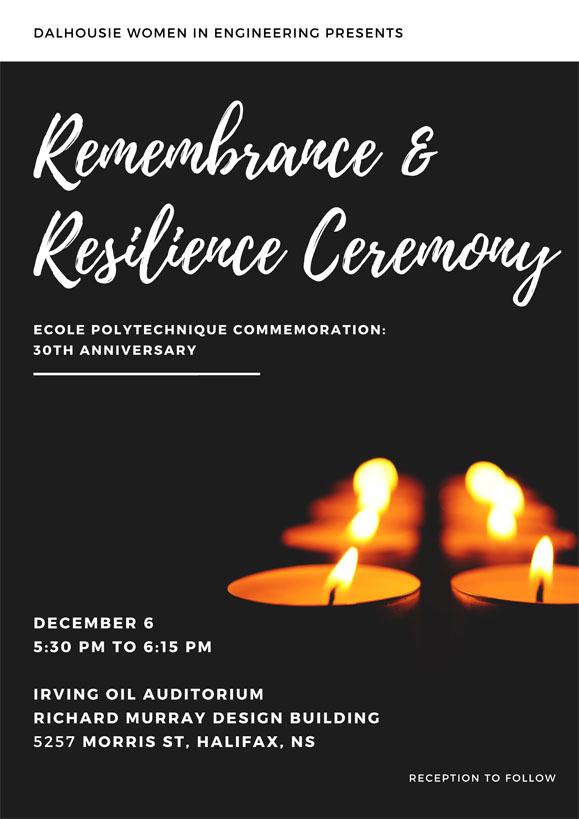