"We just wanted to make it really easy for people," says Isabelle Hurley, of the tracking site she has launched with her supervisor Derek Tittensor. (Nick Pearce photos)

Isabelle Hurley was walking through the Dalhousie campus last summer, listening to a podcast about climate change and thinking about the upcoming federal election, when the guest on the podcast noted that there were few online resources to help people sort out where the main political parties stood on a range of environmental issues.

Hurley mentioned this to her supervisor Derek Tittensor, of the Future Marine Ecosystems Lab, and he suggested that making such a platform was something they could do.

“Really, I think I was confused about where the different parties stood on environmental policies, so I needed to do this for myself,” she said of EnviroVote.ca, the online site she launched last week.

“I think it’s obvious the environment is top of mind for many voters, but the main options that existed for individuals involved having to sift through their candidates’ websites. So, we just wanted to make it really easy for people.”

The site lists just over 30 issues under 11 headings, such as Plastics, Species at Risk, Protected Spaces, Oil and Gas and the Paris Agreement. A circular graphic next to each issue lists where the Liberals, Conservatives, NDP and the Green Party stand on each question.

In one section, for example, it explains that climate change is largely caused by the burning of fossil fuels and indicates whether a party plans to phase out oil and gas production. If it does, the site shows a green checkmark. If it doesn’t, it gets a red ‘X.’ 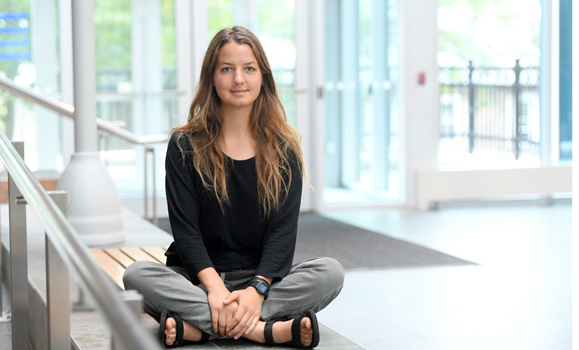 Hurley and Dr. Tittensor sourced the information for the site from the parties’ election platforms. It is regularly updated as the parties roll out their positions and promises around environmental issues.

EnviroVote also has Twitter and Instagram accounts where they feature a topical issue every day that compares the parties’ different positions on such things as a pledge to ensure that all new buildings will be net zero energy ready by 2030 and whether they plan on protecting 30 per cent of land by the same year.

Dr. Tittensor says the site is an easy-to-follow, direct comparison between the parties and is meant to be non-partisan.

“We won’t tell anyone how to vote. However, there is an information gap that needed to be filled to help voters make informed choices, and we have made this website to help to address that,” he said.

Hurley, who is focusing her studies on the fate of oceans under climate change, says environmental issues are dominating political discourse, particularly in the wake of the global climate strikes and a recent report by the Intergovernmental Panel on Climate Change.

The site is getting a lot of attention on social media and causing some of her school mates to consider starting similar sites in other countries.

“This has inspired some of them! A colleague from Germany may use it there for the German election,” she said.

“I’m really excited about it.”