The first Dal Alumni Days had plenty of events focused on celebration and recognition — but it also offered much food for thought.

The weekend featured multiple events under the Open Dialogue banner, a series that provides alumni and the broader community with opportunities to collaborate, challenge and otherwise engage in meaningful and thoughtful discussions.

One such event was Thursday night’s keynote address from Edward Snowden. And on Friday, guests had the opportunity to attend one of two Open Dialogue sessions focused on two of the most relevant topics in Canadian society today: immigration and health care.

When it comes to immigration in Nova Scotia, the discussion often seems to circle back to one central question: how do we encourage more of it?

While a record 5,790 newcomers took up permanent residency in the province last year, that number is still shy of the target of 7,000 new immigrants annually recommended by the One Nova Scotia Commission. 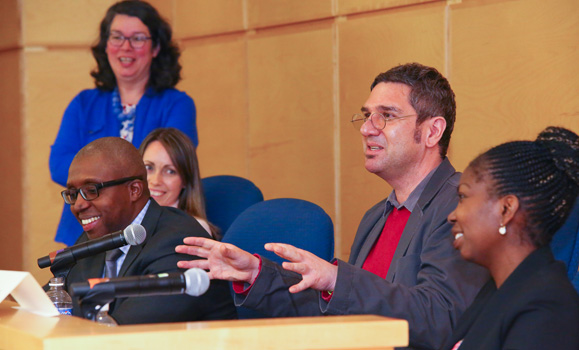 For Dalhousie Professor Howard Ramos, one of the speakers at the “Opening Doors” panel held in the Weldon Law building, attracting more newcomers hinges on three key points: better selling our region’s benefits; educating ourselves and small- and medium-sized enterprises about where people are coming from and how to keep them; and taking a creative approach to how to recruit new immigrants in the face of competition from across Canada and the world. 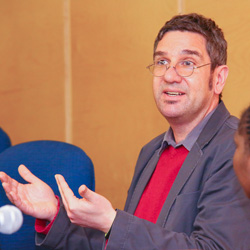 “There’s a lot of things that are going well in the region that we’re not selling. Some of the lowest unemployment rates in Canada right now are found in this region in the cities,” he said, noting that Atlantic Canada also has a better job-matching program and higher wages for worker migrants than other regions in Canada.

Dr. Ramos spoke about the need to seek out new, more creative approaches to recruitment — focusing on immigrants across a broader range of occupations and countries than we traditionally might consider.

Gregory Adolphe-Nazaire, an award-winning finance professor in Dal’s Faculty of Management, noted Quebec’s smart approach to attracting more French-speaking immigrants by strategically sending delegations to universities with large numbers of students from West Africa rather than to the countries themselves. 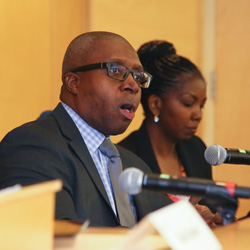 Originally from Port au Prince, Haiti, Dr. Adolphe-Nazaire and his wife moved to Nova Scotia from Montreal in 2005 despite both having promising careers there. He said the province should take a two-pronged approach to immigration, one to get people to come here and the second to instill the culture of acceptance vis-à-vis others who come from away.

“Everyone is benefitting from immigration, especially in Canada as it is extremely selective,” he said at the panel, which was moderated by Marie Chapman, chief executive director of the Canadian Museum of Immigration at Pier 21.

A focus on post-secondary

One area of particular focus for the panel was immigration in the post-secondary sector, both among student populations and in terms of faculty and staff. Karin McClay, legal advisor for Dalhousie’s international portfolio, said Dal has little trouble recruiting top talent from other countries but more trouble when it comes to retaining them here. She said her work focuses on expanding efforts to help faculty and staff have a “soft landing” when they get here. 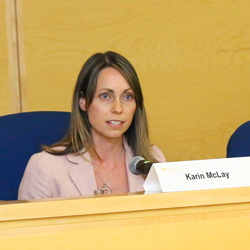 “What we’re trying to do a little bit more now is really think forward about who is coming to us and where are they coming from and what do they need to know to have a life in Nova Scotia,” she explained. 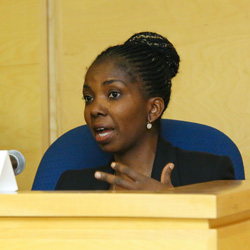 She is also a co-founder of the Generation 1 Leadership initiative, a support and education group for youth dedicated to providing immigrant children and youth with fun and inspiring experiences in Science, Technology, Engineering, Art and Math (STEAM).

“We know that families would like to get their children thinking about university from an early age as a way out and a path to create a better future,” she said.

Meanwhile, over in the Tupper Link, health research was front-and-centre, and the assembled crowd certainly didn’t need much convincing of the topic’s importance.

“It saves lives. It improves quality of life. It gives years back to those who’ve been given a terrifying diagnosis. And it brings comfort where there might have been pain,” said moderator Janet MacMillan, vice-chair of the Dalhousie Medical Research Foundation and current acting assistant-vice-president of Communications and Marketing at Dal.

“And it’s not just about hope — it’s about results.” 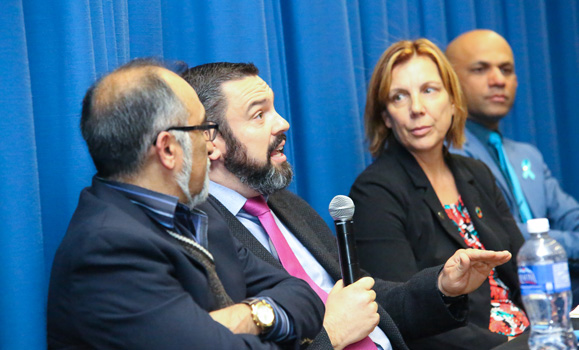 Those results were evident throughout in the panel discussion, which featured researchers from Dal’s Faculties of Medicine, Health and Dentistry. 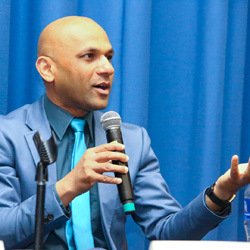 “Imagine a future when you don’t have to rely on taking drugs to treat cancers,” said Dr. Shashi Gujar of the Departments of Pathology and Microbiology & Immunology. “And to do this, believe it or not, we use viruses — viruses that infect you and get you sick.”

Science fiction? Hardly — Dr. Gujar and his team are at the forefront in developing oncolytic viruses that not only target and kill cancer cells, but protect against those cells recurring. “The dream is that we develop new immunotherapies so we can actually stop these cancers from developing in the first place,” he said.

If that seems fantastical, the presentation from Dr. Daniel Boyd of the Faculty of Dentistry must’ve seemed truly out-there to some. 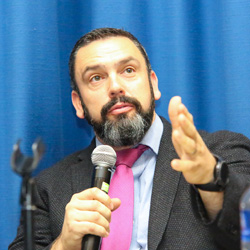 “There is one material that captivated my thoughts for as long as I can remember,” said Dr. Boyd, who cross-appointed to the School of Biomedical Engineering. “It’s a material that if we study it and learn properly, we have got the capacity to take on some of the largest challenges in clean energy, in clean water, in communications and in health care.”

That material? Glass. Dr. Boyd’s team has developed glass microspheres that can be used to block the blood supply to tumours, causing them to shrink and disappear without surgery. He’s also using glass to develop new bone cements, desensitize toothpastes and develop synthetic bone grafts to treat osteoarthritis. Now a local spin-out company called ABK Biomedical is generating millions of dollars in funding to help bring such technologies to patients — “And we’re just getting started,” added Dr. Boyd.

Treatment is one thing — but so much of the astronomical growth in health-care spending in Canada is really about “sickness care,” as Dr. Sara Kirk puts it. A professor in the School of Health Promotion and scientific director of the Healthy Populations Institute, she explained about how upwards of 40 per cent of cancer cases and 80 per cent of heart disease and strokes could be prevented through diet, exercise and living smoke-free — but that fewer than 5 per cent of us are able to achieve a satisfactory level of all three behaviours at the same time. 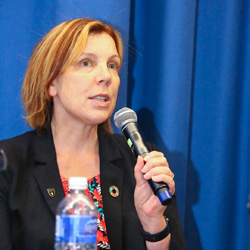 “Essentially, what this means is that healthy behaviour is abnormal… and our modern environments encourage us to do the opposite of things we should be doing to prevent chronic diseases and to actually achieve our best health potential,” she said.

That’s why she’s focused on young people, in particular, co-leading a new initiative called UpLift that just received $5-million in matching funds to build on existing best practices to engage school children in healthy living — “to really create healthy generations for the children and youth of this province.” 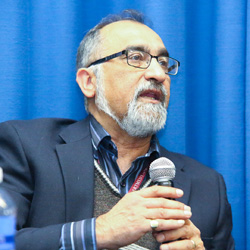 At the other end of life’s journey, there’s the work of Dr. Sultan Darvesh, Dalhousie Medical Research Foundation’s Irene MacDonald Sobey Chair in Curative Approaches to Alzheimer’s Disease. His team has identified a small radioactive molecule that can positively identify a key enzyme in the progression of Alzheimer’s disease, enabling something that’s never been possible before: a definitive diagnosis of the disease in living patients.

But he’s not stopping, either: like his colleagues on the panel, Dr. Darvesh is not resting on his successes, achievements and discoveries. He wants to be at the forefront of not just diagnosing but treating Alzheimer’s.

“We still have no cure,” he said. “And not finding a cure for Alzheimer’s disease and dementia is not an option.”