Grad profile: Voices from the past inspire resistance and hope

This article is part of our series profiling the Class of 2018 — the grads of Dal's 200th year. Click here for more profiles, and learn more about Dal Convocation at the Convocation website.

For Mercedes Peters, coming of age at the same time as the Idle No More movement pushed her in scholarly directions she never expected.

“On the one hand, it was amazing, because for the first time in my life it felt like people were talking about Indigenous people in the news in really positive ways,” says Mercedes, who hails from the Glooscap First Nation.

“But because they were demonstrations and protests, there were a lot of racists coming out of the woodwork. I was 17, and I didn’t have the language to explain to them why they were wrong — all I had was this anger.”

It was her desire to build that language that eventually led her to Dalhousie for her master’s studies. At Dal, she worked with History Professor Jerry Bannister on a project exploring the perspectives and voices of Mi’kmaw women under the Indian Act (first passed in 1876).

As her project took shape, it focused in on a number of archival sources — at first, with files from Library and Archives Canada. There, she had the unsettling experience of finding federal Indian Affairs documents about her family members and mentors.

“It was really kind of heartbreaking and difficult to see Indian Agent writing about a family member of yours in a very disconnected kind of way. It hits home that when you’re an Indigenous research, it can become closer to you than it might for a traditional historian.” 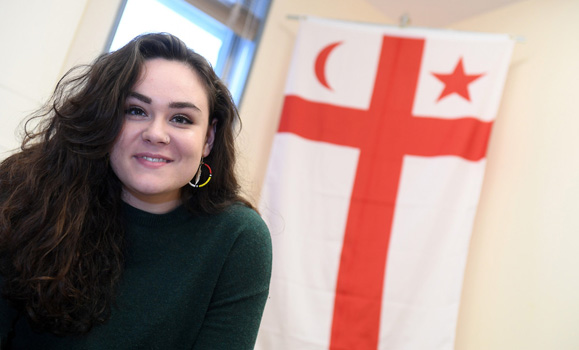 In contrast, the publication that became the core of her project — the Micmac News (1965-91) — was a revelation for her. First developed in Membertou, the publication covered historical and contemporary issues and events, including celebrations of Mi’kmaw life, for over 25 years.

“In the paper, I was still finding family members and people I knew, but it was a different kind of language. It’s a remarkable example of Mi’kmaw agency and resiliency — and it’s in our words. It was created by us, for us… you actually watch as Mi’kmaw women who are impacted by the Indian Act, and are impacted by these government structures, forcing themselves into the newspaper, making space for themselves, creating an activist base. It actually became an amazing project.”

Research with a purpose

Mercedes, who is now pursuing a PhD at the University of British Columbia, is clear that her research is as much about the present as the past.

“My work has always been political because my identity is something that’s been politicized,” she says, adding: “These histories are not things I’m doing just because they’re interesting. I’m doing them because I feel like if we can learn from the past, there are ways that we can shape our present that are more beneficial to us as Indigenous people.

“Whatever I do after my PhD, as long as I can do something that brings it back to helping my community and then, more broadly, Indigenous people, then I’ll be fine wherever I end up.”