Meet Danielle Griffin, a third-year Materials Engineering student who is one of the keynote speakers at this year’s Dal Lead! student leadership conference on February 2. She is on the Autism Spectrum.

Danielle grew up in Southampton, U.K. until her parents decided to move her and her brother to Nova Scotia to have a better upbringing when she was 11 years old. Having been misdiagnosed with a “complex learning and language disorder,” she did not receive adequate support during most of her education in the U.K. — or even after she arrived in Canada.

“I didn’t speak until I was three years old,” says Danielle. “I didn’t form full sentences until I was around 10. It is a lot easier to see [symptoms of Autism] at a younger age, but the problem is they hadn’t really taken women into account. It actually presents differently in girls than it does in boys and a lot of girls go undiagnosed.”

Living as a social chameleon

It is widely believed that Autism Spectrum Disorder (ASD) is more prevalent in boys than girls. However, recent research shows that many women are often misdiagnosed. Researchers believe this is due to a social chameleon effect: that girls' social skills lead them to mimic the appropriate actions and reactions of other people.

“Girls rarely get diagnosed,” says Danielle. “They say it’s one girl for every four boys, but you don’t know how many have been misdiagnosed or simply ignored... [Girls] go and play on their own, that’s not as strange than if a boy were to go play on his own rather than rough and tumble with the other boys.”

In grade 11, Danielle’s IB exams were coming up at Park View Education Centre in Bridgewater, and she underwent testing to get approval for a time extension. Danielle was initially diagnosed with a communication disorder, but she was referred to a psychologist who focused on girls on the spectrum. Finally, she was correctly diagnosed.

“It is really difficult to tell if a girl is on the spectrum,” she says. “A lot of people on the spectrum are really good at finding their own strategies. It’s like having filters in your head.”

Danielle finished with the highest IB average ever at Park View. But she had difficulty with emotional control and was often suspended from school — an interesting paradox that confused her teachers. Nonetheless, she set her sights on attending university.

Making her mark at Dalhousie

Danielle had always wanted to be a scientist or an engineer. When looking to further her education, Dalhousie just made sense. Only an hour away from her parents, Danielle could still have her support network close by. Materials Engineering seemed to be the perfect fit, too; the questions and problems are straightforward and the concepts are visual. Plus, she says, the people in the program are great — very open and accepting. 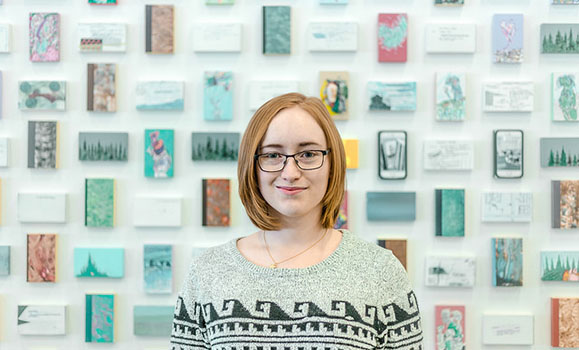 “When making friends, humour helps a lot with getting people to be more comfortable. Actually, even now when I do something wrong or something deemed awkward, I’ll tell my friends, ‘That’s Autism for you!’”

While Danielle is comfortable joking about her diagnosis now, it took time for her to get used to the idea.

Danielle brings a multi-coloured pen to her exams and labels different parts of each question with a specific colour. She has academic accommodations and often takes the full time to finish.

“There’s so much stigma around getting accommodations,” she says. “I’ve had people tell me off for having them, thinking I don’t need extra time. And that’s unfair. At the same time, I felt bad for taking resources away from other people. But it’s things I need to be able to compete with other people. And engineering is very competitive.”

Giving back to the Autism community

When she’s not doing schoolwork, Danielle spends time volunteering for Autism Nova Scotia. She runs a social group every Friday night where people on the spectrum can connect with others facing similar challenges. It’s a safe place where they can talk about their experiences and offer support to one another.

“When you’re on the spectrum it’s incredibly difficult to connect with people,” she says. “It’s like different programming for your brain. I run on Linux whereas everyone else runs on Microsoft.”

Danielle also sits on the advisory board for Autism Nova Scotia where she offers insight and ideas to new programs. After speaking at the Halifax Autism conference last year, she met Dr. Isabel Smith, a professor and Craig Chair in Autism Research at Dalhousie who works for the Autism Research Centre at the IWK Health Centre. Danielle lends her unique perspective to Dr. Smith’s current research and that of her colleagues.

"I met Danielle in March 2017, when we were both presenting at an Autism Nova Scotia conference,” says Dr. Smith. “I was very impressed at how articulate she was in describing her experiences as a young woman with Autism Spectrum Disorder. When my colleague Dr. Jillian Filliter was looking for a member of the adult autistic community to join her study team examining adults' perspectives on what it means to be autistic, I suggested Danielle and she has been an invaluable contributor.”

Dr. Smith has also introduced Danielle to Dr. Tamara Sorenson-Duncan, a postdoctoral fellow who she is working with to study the benefits and shortcomings of social media communication for autistic people.

“Increasingly, we in the research world recognize the critical need to engage people who bring first-person perspectives as partners in our studies,” says Dr. Smith.

In her keynote speech at Dal Lead!, Danielle will be talking about the Autism community as a whole, sharing personal anecdotes and stories from people on the spectrum who she has met.

“It’s important to understand the challenges that come with Autism,” she says. “I’ll be focusing on where the Autism community is at, how you can help, and how we can get there. Students are especially important to starting this conversation. Universities are places of ideas and acceptance.”

One of the biggest barriers Danielle is trying to take down is making people more comfortable disclosing their learning disabilities and educating the general public about what Autism is and what it isn’t.