When Dr. Sultan Darvesh (MD’88) was completing his residency in Neurology with Dalhousie University’s Faculty of Medicine in the early 1990s, he often asked his mentors for advice on what to research in his medical career.

“The consensus,” he recalls, “was that I should pick the most complicated, most difficult subject matter I could explore and focus on that, so I chose Alzheimer’s disease.” 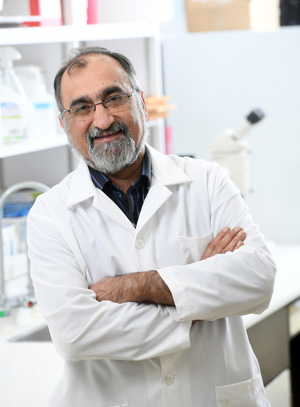 Working with a team of researchers, he has developed a small radioactive molecule that can positively identify butyrylcholinesterase, an enzyme that plays a key role in the progression of Alzheimer’s disease, in PET and SPECT scans. It could, he says, enable a definitive diagnosis of the disease in living patients, something that has never been possible before.

“Right now, the only way we can make a definitive diagnosis is during autopsy,” Dr. Darvesh says. “Typically, we can be 80 to 90 per cent certain that a patient has it, but by the time we make a diagnosis, many of the patient’s brain cells have died and cannot be regenerated. Moreover, it means 20 per cent of the patients we enroll in related clinical trials do not have the disease, and that is problematic because many of these trials fail.”

The ability to make an early definitive diagnosis during life would not only facilitate research and development of therapies to combat this disease but also provide guidance to patients and their loved ones on how they can better manage the often-devastating impacts of Alzheimer’s.

“To experience that kind of deterioration and not quite know what’s going on really turns people’s lives upside down,” Dr. Darvesh says. “There are many issues to deal with from safety to day-to-day care. If we can provide patients and families with a diagnosis and education about the impacts of the disease, we can help them cope.”

Originally from Tanzania, Dr. Darvesh completed a PhD in organic chemistry in 1983 and a postdoctoral fellowship in molecular biology in 1984 at the University of New Brunswick before joining Dalhousie’s Neurology residency program. “The professors and scientists here were absolutely spectacular,” Dr. Darvesh says. “The mark of a great teacher is the ability to arouse a student’s curiosity, and that is what they did for me. Their enthusiasm for research was such that it lit a fire in me.” 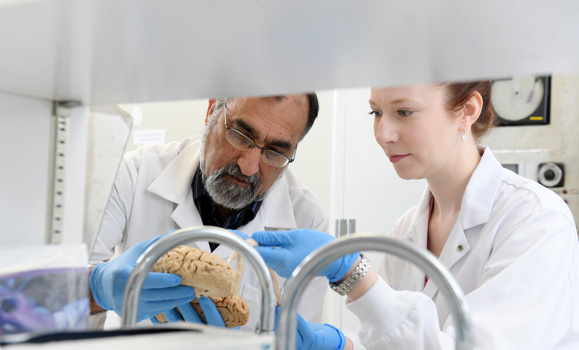 Such was that fire that when it came time to start his academic and clinical career, Dr. Darvesh determined that Dalhousie was the best place to be. “From infrastructure to expertise, there is an environment here that is conducive to innovation and exploration,” Dr. Darvesh says. “Where you have that kind of good will, good things happen, and that is why I decided to do my Alzheimer’s research here.”

To date, Dr. Darvesh and his team have been able to demonstrate proof of principle for the radioactive molecule using mouse models to image the accumulation of butyrylcholinesterase-associated Alzheimer’s disease pathology in the brain. Now, Dr. Darvesh is working to refine the molecule so that it can eventually undergo clinical trials.

“You can’t put all your eggs in one basket, so we are synthesizing and evaluating many different classes of molecules to see which one will be most effective,” Dr. Darvesh says. “It has to be a better radiotracer, it has to get to the brain faster, and it has to stay there longer. It may seem like we are focused on only one thing, and to a degree we are, but there is a lot of work going on.”

That focus is presently razor sharp for Dr. Darvesh. He has no plans and no goal beyond perfecting this diagnostic tool. For him, this is not about leaving behind a legacy; this is about making a difference here and now.

“The ultimate goal is to find a cure for this disease,” Dr. Darvesh says. “If the steps we are taking at Dalhousie, small as they are, help other researchers to diagnose and develop therapies for Alzheimer’s disease, that would be amazing. That is what I want to see in my lifetime.”

This article was originally published as part of the Dalhousie Alumni "Building a Better World" series. For more stories, visit Dal's alumni website.