This year's Dal recipients of the Natural Sciences and Engineering Research Council (NSERC) Discovery Grants were revealed Friday as part of a larger national announcement by the Honourable Kirsty Duncan, Canada's Minister of Science, at the University of Victoria in British Columbia.

Awarded annually, the grants give researchers the flexibility to explore the most promising avenues of research as they emerge. A total of $515 million is being awarded to researchers across Canada as part of the program this year.

In this two-part feature, we speak to two of Dal’s recipients, Dr. Arunika Gunawardena (Department of Biology) and Dr. Peter Selinger (Department of Mathematics and Statistics), about their work. Apart from making an impact on their field of study, Drs. Gunawardena and Selinger are specializing in research that has the potential to significantly impact the world.

It all starts with a single plant. Aponogeton madagascariensis, aka, the lace plant.

Dr. Gunawardena’s research focuses on programmed cell death (PCD), the process by which cells self-destruct. It plays an important role in the development and defence mechanisms of both plants and animals. A fascinating example of developmentally regulated PCD is perforation (hole) formation in lace plant leaves, which is an extremely rare event across vascular plants.

“It’s very precise,” Dr. Gunawardena says. “It starts from the center and then develops toward the veins, stopping 4 to 5 cells from the edge,” she further explains, pointing out the intact cells bordering each hole in the leaf.

This precision makes it predictable, and a perfect specimen for scientific study. Dr. Gunawardena and her team aim to understand how the process works, and what mechanics protect certain cells from programmed death. 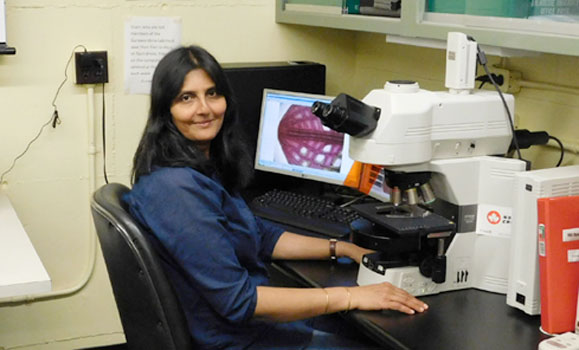 Manipulating PCD has far-reaching applications, from medicine to agriculture. For instance, delaying cell death could lead to increased shelf life of crops.

Dr. Gunawardena’s lab successfully inhibited PCD in the lace plant, stopping the formation of the holes in its leaves. Now the next step is inducing PCD in the cells that usually remain intact.

Understanding this process begins with the role of anthocyanin, an antioxidant. Its reddish colour is noticeably lost in cells that undergo PCD. “That tells us something,” Dr. Gunawardena shares excitedly, “because the cells which do not undergo PCD, they retain antioxidants.”

If anthocyanin is found to have a role in regulating gene expression, it could be a key component in jumpstarting PCD. “We are planning to extract anthocyanin from these leaves and apply to different types of cancer cell lines to see what happens,” says Dr. Gunawardena, later adding that preliminary experiments are already in progress in collaboration with Dr. David Hoskin at the Faculty of Medicine.

Of the approximate 390 000 known plant species, very few are considered model organisms. A model organism is typically easy to maintain in a lab, and offers other benefits for researchers. But when only a few plant species are regularly studied, a great deal of diversity flies under the radar.

“Current techniques allow us to explore the possibilities of other non-model organisms,” says Dr. Gunawardena.

When she first started her research 15 years ago, there was no literature available except one French PhD thesis written in 1907. It took a lot of work to build techniques and evidence for studying the lace plant, but for Dr. Gunawardena, the learning experience was invaluable.

“I’m very happy and proud of my students because they had to optimize all standard protocols for this non-model,” she smiles, noting how her students persevered, working hard to develop the lace plant into a model system.

“It’s really rewarding because we get to contribute to all aspects of the research”,” adds honours student Meredith Fraser.

So far, the research has been featured on the cover of nine high-ranking international journals, including publications co-authored by a few of the students. Dr. Gunawardena couldn’t be prouder.

“We are like a family,” she says simply, “which contributes to our productivity and success I think.”

A magician never reveals his tricks, but with seemingly magical quantum computers slowly becoming more reality than theory, understanding how they work is more important than ever before.

Peter Selinger, a mathematician at Dal, works with quantum circuits. Specifically, he aims to build programs that make the circuits work better. 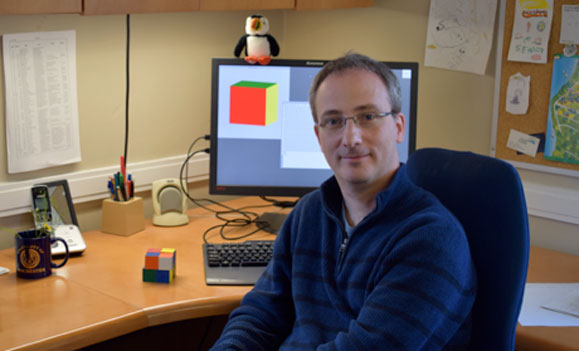 While classical computers use ‘bits’ to carry information, quantum computers use ‘qubits.’ Classical bits exist as either a 0 or a 1, but a qubit can exist in between both states at once. So, at any time, a qubit could represent any one of infinitely many values between 0 and 1. This mind-blowing property is called superposition, and it opens up a universe of computing potential. But how can we harness this potential?

When a qubit in superposition is measured, it collapses into either a 0 or a 1, producing the same type of output as a regular bit. However, you can’t predict which state the qubit will end up in.

Qubits can also react to each other in a phenomenon called ‘entanglement’. Simply put, when one qubit chooses a state, another qubit entangled with it chooses the opposite state – no matter how far apart they are. It’s a lot to keep track of.

In order to control qubits, with all of their odd behaviours, programmers use gates, just like in a classical computer. A gate is like a channel that directs the path of information (made up of bits in a classical computer, and qubits in a quantum computer.) Send several qubits through a series of gates and you’ve got the basis of a quantum circuit.

“A quantum circuit is basically instructions for the quantum computer,” Dr. Selinger explains.

We know how a quantum computer could work, but there are many limitations.

In some of the most promising quantum hardware, qubits need to be kept cool at a temperature of 0.015 Kelvin – colder than outer space! They are also sensitive to light, and can be extremely noisy. Altogether, a quantum computer can only run for a few milli-seconds without interference.

Qubits are also an expensive resource, and Dr. Selinger says you need at least a few hundred of them to do anything beyond the scope of a normal computer.

“In a quantum computer you’re going to have some finite set of gates that are built into it and you have to optimize the use of these gates.”

Optimization. This is the goal at the heart of Dr. Selinger’s research, and means getting a result using the fewest number of qubits and gates, and the shortest sequence of steps.

“If you only have a few hundred qubits, you need to use them wisely, you don’t want to waste them,” he explains. “Similar to when classical computers were built in the 40’s and they had maybe a few hundred bits. You programmed them very resource-consciously.”

The first computers were coded completely by hand. But hand-coding such a large number of quirky qubits is not exactly ideal.

The art of programming

The puzzle of efficient quantum programming is a challenging one to say the least. For Dr. Selinger, it requires perseverance and problem-solving skills. “It’s as much an art as it is a science,” he says.

In addition to his new NSERC Discovery Grant, Dr. Selinger also holds a grant from the U.S. Air Force Office of Scientific Research.

Dr. Selinger started building programming languages for quantum computation fifteen years ago, and the possibilities look very different now. “I think we’re maybe five to ten years from having computers with between a hundred and a few hundred qubits,” he estimates.