Dal researchers Elizabeth Kerrigan, Lin Cheng and Anna Haverstock as they prepare a unique, mobile laboratory for its maiden voyage. Kerrigan and Cheng will both be part of the expedition itself, travelling from St. John’s to Galway, Ireland. (Provided photos)

Three made-in-Nova Scotia approaches to ocean science will be used during an upcoming voyage to study the impacts of climate change on the Northwest Atlantic, sailing from St. John’s, NL to Galway, Ireland onboard the Irish research vessel the Celtic Explorer.

The research is being led by the Marine Institute of Galway, a partner of the Dalhousie University-hosted Ocean Frontier Institute which was established in the fall of 2016 through a $220 million, multi-year program funded by the Government of Canada and various private and public sector organizations.

“OFI is an international hub for ocean science, bringing together researchers from both sides of the Atlantic to create safe, sustainable solutions for ocean development,” says Doug Wallace, Canada Excellence Research Chair in Ocean Science and Technology and an OFI researcher. “This research voyage illustrates the benefits of OFI, using made-in-Atlantic-Canada ingenuity to help assess climate change.”

The research vessel which departed Galway, Ireland on April 18, is scheduled to arrive in St. John’s, Nfld. on April 26. The ship departs St. John’s April 27, returning to Galway on May 23. 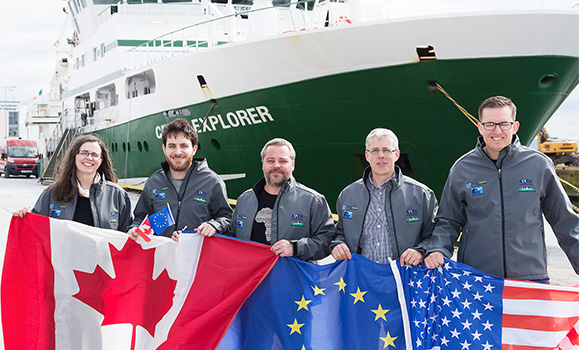 The scientific studies being conducted will help evaluate the impact of climate change on the ocean and identify how nutrients and oxygen move within the sea’s currents. Data collected will also allow detection of the ongoing acidification of deep ocean waters, including those which impact the ocean’s ecosystem.

The locally-developed equipment being used during the research voyage includes:

The Celtic Explorer cruise marks the maiden voyage for this oceanography laboratory, a 20-foot long container designed to withstand the extremely rough weather and wave conditions of the Northwest Atlantic. The mobile lab will be attached to the Celtic Explorer’s electricity and water and its sturdy design mean scientists — and their sensitive and valuable equipment — are protected while working during inclement weather. The mobile lab allows research equipment to be more easily and efficiently transported to sea. Previously, the equipment would be dismantled, shipped in crates and then re-installed, increasing costs, set-up time and risk of equipment damage. This mobile laboratory creates new possibilities to use non-specialized vessels such as offshore supply vessels, for sophisticated chemical, biological and geological research at sea.

The Northwest Atlantic Ocean removes vast amounts of carbon dioxide (CO2) from the atmosphere. While this “carbon sink” mitigates climate change, the CO2 offset must be measured to assess whether global efforts to reduce greenhouse gas emissions are effective. During the Celtic Explorer cruise, researchers will compare three different CO2 measurement systems including a high-accuracy sensor developed by Pro-Oceanus Systems Ltd. If the test on Celtic Explorer is successful, this made in Nova Scotia sensor can be installed on research and commercial vessels worldwide, increasing the data coverage from which to measure the ocean’s carbon sink.

Identification system developed by the Bedford Institute of Oceanography, distributed by Cabot Shipping Supplies of Dartmouth

During the Celtic Explorer expedition, the vessel will stop every 30 nautical miles and sample water from at least 24 different depths. At each depth, samples for a dozen different measurements will be collected, resulting in thousands of individual water samples that must be recorded and tracked. A unique, sample-tracking system initially developed at Fisheries and Oceans Canada’s Bedford Institute of Oceanography, enables data collection to occur efficiently while the labelling — known as “Bedford Stickers” — creates a cohesive collection process. The “Bedford Stickers,” which use adhesive that withstand wet and dry conditions and variable temperatures, are distributed by Cabot Shipping Supplies of Dartmouth, NS.

The scientists conducting the research also have a Nova Scotia connection. Five of the researchers that will work onboard the Celtic Explorer are from Dalhousie: