Cracking the "coda": What Pacific sperm whales tell us about culture in the animal kingdom

A sperm whale dives under the waves. (Provided photos)

Observing cultural evolution: it may not be something you’d expect from a marine biologist but Dalhousie’s Mauricio Cantor, a PhD candidate in biology, is zeroing in on the cultures of the deep.

Since 2013, Cantor, under the supervision of Hal Whitehead in the Department of Biology, studied sperm whales off the Galápagos Islands. His paper, published this week in Nature Communications, details findings that suggest culture—generally viewed as distinctly human—is also at play among these marine giants.

“Culture in animal societies is a highly debated topic,” says Cantor, originally from Curitiba, Brazil. “Some experts think it’s clear enough, while others don’t think the word ‘culture’ should be used describing anything but humans.”

Cantor’s study examined two clans of sperm whales, observed in the Pacific since the ‘80s, that share the same geographic area. Despite living in the same neighbourhood, each clan of whales developed their own “dialects” composed of  patterns of clicking sounds called codas.

“It’s quite rare,” says Cantor, explaining that two clans of the same species sharing an area don’t typically develop unique communication signals. But this kind of segregation is evident in human populations and, broadly speaking, comes as a result of cultural evolution. With that in mind, Cantor set out to find evidence that culture isn’t just a feature of human life.

Conversations of the deep

Funded by The National Geographic Society, Natural Sciences and Engineering Research Council of Canada (NSERC), the Killam Trusts and The Brazilian National Council for Scientific and Technological Development (CNPq), Cantor and Whitehead teamed up with the Galápagos National Park and began exploring the deep waters.

The team listened for the whales’ clicking sounds with an underwater microphone to nail down their locations and study their coda repertoires. Once the whales came to the surface to breathe, about every 40 minutes, the team photographed their tails. The ridge of the tail is a sperm whale’s equivalent to a fingerprint. The team matched codas and behaviours to individual sperm whales.

After the fieldwork was complete, Cantor and his colleagues combined that data with previous Whitehead Lab data dating as far back as the ‘80s to create virtual populations of whales using computer simulations.

“We try to backtrack the patterns we observe in the wild to infer how the clan segregation could have evolved,” says Cantor. “The computer will simulate the life of several sperm whale populations that acquire codas in different ways over thousands of years. At the end, we see which case could produce clans with different dialects.” 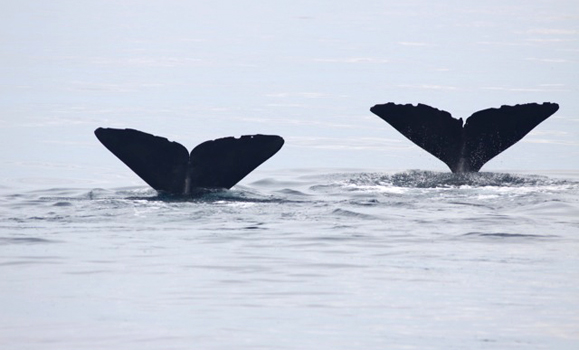 Looking to investigate how the whales created two separate dialects, Cantor simulated several scenarios with these virtual populations. One examined individual learning: how the dialects would evolve if the whales created codas by themselves. Another examined genetic transmission: how the dialects would evolve if they innately knew which codas to produce. A third examined social learning: when whales could listen and copy the codas they hear from other whales. Social learning could be biased; for instance, whales could conform to learn the most common codas, or learn from the individuals who produce similar codas, or use specific codas to mark the identity of the clans they belong to.

“Our findings show that biased social learning is a required ingredient for the segregation of clans of sperm whales with different ‘dialects’,” says Cantor. Through the simulations, he explains, it becomes evident that whales are learning how to communicate from each other — similar to how humans work. The whales in each clan are conforming to those most similar around them.

“This gives us evidence that key features of human culture — which we think makes us so different from everything else in nature — might be at play in populations of other animals,” says Cantor. “Maybe we’re not as different as we thought.”

Showing that culture can be a mechanism structuring animal societies, Cantor’s work will fuel the ongoing debate among experts all over the world. Now tourists in the world-famous islands will have more insight into this debate too. Through the partnership with the Galápagos National Park, Cantor provided material that helps guides explain sperm whale behaviour and culture to visitors.

"I’ve been trying to understand the culture of sperm whales for quite a few years, and for even more I’ve studied their societies,” says Dr. Whitehead, biology professor at Dalhousie and Cantor’s supervisor. “What Cantor has done is show how interrelated sperm whale society and sperm whale culture are, and how the feedbacks between culture and society may have worked in the evolution of this extraordinary animal."

The Whitehead Lab is known for its work examining culture in marine life. Late last year, Dr. Whitehead and Dr. Luke Rendell of the University of St. Andrews, a former PhD student in the Whitehead Lab, co-authored a book titled The Cultural Lives of Dolphins and Whales. Learn more about that book and culture in the animal kingdom.