To manage rising costs, and with only a 1 per cent increase to its provincial funding, Dalhousie will be looking to both tuition income and cost savings to balance its 2015-16 operating budget.

The first of these two measures was addressed at last Tuesday’s Board of Governors meeting, as the Board voted on tuition and fees for the upcoming academic year.

The Board approved a 3 per cent general increase to tuition, including the international differential fee. (For a Canadian undergraduate Arts student, the increase raises basic tuition by $204 over last year.) The Board also approved a 3 per cent increase to the Facilities Renewal fee — an additional $2.45 per term — to support continued work addressing aging infrastructure on campus.

The Board approves tuition and fees at its April meeting, ahead of the overall budget’s approval in June, so the changes can be implemented for the upcoming academic year. The forthcoming budget will aim to identify cost savings across the university by applying reductions to Faculty and unit budgets of 2.5 and 2 per cent, respectively.

Like most universities across Canada, Dalhousie has been challenged in recent years with balancing its budget in the face of slowed or decreased government funding. Over the past four years, Dal’s provincial operating grant has decreased by a net 9%. In the latest provincial budget announced on April 9, the Government of Nova Scotia committed to increasing overall university operating grants by approximately 1% for each of the next four years. 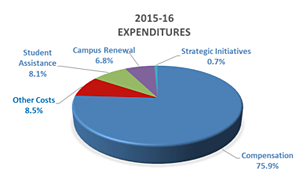 “Seventy-five per cent of operating expenses are represented by commitments to our people: salaries, benefits and related compensation for faculty and staff across the university,” explains Ian Nason, vice-president finance and administration.

Compensation costs go up each year, based on cost-of living increases and other adjustments in line with Dal’s collective agreements. Another significant cost driver is in utilities (energy, water, taxes and insurance), where Dal will need to increase this budget line by an additional $1.3 million next year.

Tuition contributes almost 40% of the University’s operating revenue  and is therefore a key element of the balanced budget plan, and is one way to address rising cost pressures. Some income can come from attracting more students: BAC is planning for a 1% increase in Dal’s enrolment next year due to the flow of new high school students through the university over the past few years. But tuition alone can’t balance the budget: in recent years tuition increases have been capped at 3% by the Government in most programs and Dal must be mindful of how its tuition levels compare to other universities.

As part of Dal’s budget process Faculties and units must capture expenditure savings and/or implement new revenue initiatives from year to year. Dal’s budget model typically doesn’t pick and choose where specific budget reductions come from. Instead, the model applies them as percentages across the university, asking all Faculties and service units to save costs in the way that best lines up with their own goals and objectives as well as the University's strategic priorities. 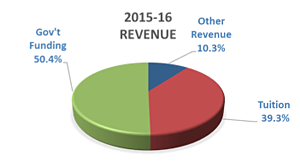 For this upcoming year the budget plan calls for a balanced approach: general tuition fee increases at 3% and budget reductions of 2.5% for faculties and 2% for units. The university will also be using $1.8 million in reserve funds to close the budget gap and at the same time allow funding to support key projects under the university’s Strategic Direction and necessary facilities renewal work without requiring deeper cuts to Faculties and units.

Last Tuesday’s Board vote isn’t the first students had heard about the budget, tuition and fee proposals. The BAC Report and proposed increases  were first shared with all students in early March, part of the consultation process that goes into developing the budget plan.

Those consultations begin in the fall, when the Budget Advisory Committee meets with representatives from various student groups as well as the DSU. Then, after the release of the draft budget plan in early March, the entire Dal community is invited to provide feedback and open student consultations are held. This feedback filters not only into the final budget plan where appropriate, but into improving the budget process itself. (For some insight, the Operating Budget Plan outlines how BAC has responded to some of the feedback from last year’s consultations. See Appendix J.)

Student feedback this year focused on several themes, including:
•    Concerns about rising tuition fees
•    ERBA formula and its impact in a time of flat or reduced enrolment
•    Communication and understanding of the budget
•    Process used to allocate strategic initiatives funding
•    Consideration of program prioritization and other cost cutting strategies
•    The impact of budget reductions on student services and library
•    Salary costs/annual salary increases

“Everyone who works and studies at Dal is sensitive to the rising cost of education,” says Dr. Watters. “Unfortunately, in an environment where government funding is slow to increase or is decreasing, it’s fair to say that students should expect some tuition increases as Dal manages cost pressures without having to make deeper cuts to our programs and services.”

The Dalhousie Student Union made a formal submission to the BAC this year in which it recommended using reserve funds alone to close the budget gap, thus freezing both tuition fees and Faculty and unit budgets at the current level. Nason says that would use up the university’s reserves, preventing them from being applied the way they’re intended: protecting Faculties/units from deeper and/or sudden adjustments in tough budget years. The main challenge, though, is it would only defer, not solve, the budget crunch: the government has already said universities can expect only a 1% increase in the operating grant each year, meaning a tuition freeze this year would simply require larger tuition increases and/or deeper budget reductions the following year. 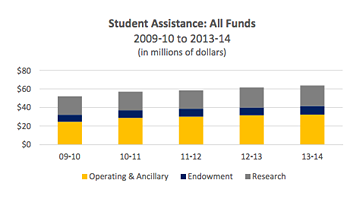 Dr. Watters notes, as part of this discussion, that Dal is not making any cuts to its student assistance operating budget next year. The total student assistance available through Dalhousie (including scholarships, research support and student employment) has increased by 75% in the past decade, totaling $63.8 million in 2013-14. (The 2014-15 figure will be calculated for the Annual Financial Report in June.)

ERBA, (Enrolment Related Budget Allocations) is the mechanism by which the university links program enrolments and class registrations to the annual budget allocations that each Faculty receives. While it works well for programs where enrolment is increasing, it can pose challenges in Faculties where enrolment is declining but costs are largely fixed. A committee has been formed to review the ERBA mechanism and will report on the issue within the next few months; its recommendations will be reflected in the 2016-17 budget.

The BAC also received feedback that students and student leaders want more opportunities for discussion in order to increase their understanding of the process and the budget. The University has committed to meeting with the new DSU executive earlier to review the overall budget process and to developing new information to engage students on the makeup of the budget.

One of the reasons for the heightened interest in tuition at the moment relates to changes announced as part of the Government of Nova Scotia’s new budget. The government will allow universities to make one-time “market adjustments” to tuition on an individual program basis, after which it will reinstate the 3% cap on tuition increases for Nova Scotia undergrads. There will no longer be any cap on tuition increases for out-of-province or graduate students.

These changes weren’t made in time to affect Dalhousie’s 2015-16 budget, as the university’s budget planning and consultations were largely complete when they were announced. But does that mean students should expect big changes in tuition and fees next year?

The two vice-presidents say that’s not the case. For one, the so-called “market adjustment” is not intended to be a broadly applied mechanism to increase tuition fees across the board; it’s meant for programs where fees were frozen (and increases subsequently capped). They explain that the vast majority of programs at Dal don’t fall into this category and that there may be, at most, a small number of programs where Dal may consider seeking an adjustment beyond the norm.

“It’s too early to speculate beyond that,” says Nason, “because any and all changes will be considered as part of our open and consultative budget process, with many opportunities for students and other stakeholders to contribute.”

Dr. Watters reaffirms that commitment. She also notes that with over half of Dal’s students coming from out-of-province, and with a growing international population, Dal’s success depends on continuing to be competitive in attracting and supporting students from beyond Nova Scotia.

“We don’t want to put ourselves in a position with tuition fees where our programs are unable to attract the best and brightest students,” she says. “That’s why we’ll continue to follow a consultative budget process: so we can share our budget challenges with students and other stakeholders, and they can contribute their ideas, thoughts, and concerns in return.”

Interested in learning more about the Dal budget, tuition and fees? Read the full Budget Advisory Committee Operating Budget Plan, with appendices that include details from student consultations, tuition comparisons and more on ERBA.