Getting to know your staff: Alex Hurley 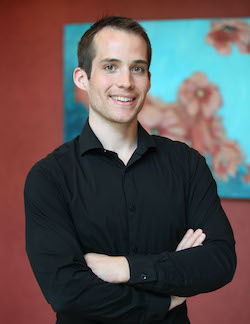 Alex Hurley has spent most of his life in Nova Scotia, although he wasn’t born here. “I was born in Alberta. Shortly afterward my parents, who are from here, started their migration back to Atlantic Canada. We lived in Newfoundland for a year, then moved to Nova Scotia. We moved a lot, but I grew up mainly in rural Nova Scotia in a town called Chignecto, and then in Amherst,” he says. “It was enjoyable and being in nature is probably the reason I am where I am today, because I had access to things that  I’m passionate about.”

Alex’s Dalhousie journey began back in 2007, when he started working toward his undergrad, a Bachelor of Science. He then went on to complete a master’s in Oceanography, graduating in 2015. “After graduation, I got a job with a local startup in the med-tech space and worked with them for a few years before working with an Ontario-based accelerator, helping them establish operations in Nova Scotia.”

In 2019, Alex returned to Dal as a Venture Manager (Oceans Stream) for CDL Atlantic and then moved into his current role, which he describes as his dream job – a marriage of his passions and previous academic and work experiences. “I work with ocean tech companies to facilitate their interactions with our programs and help increase their probability of success,” he says. What makes his job extraordinarily special, he says “is getting to work with the team at CDL-Atlantic. Everyone on this team is amazing, and it's an absolute pleasure working with them every day”. While his career aspirations have shifted several times during his life, what hasn’t changed is his love of science. “I’ve always been passionate about earth and ocean sciences, but it never clicked what a career in those fields could look like. I followed my interest as a child, which led to a career I love.” 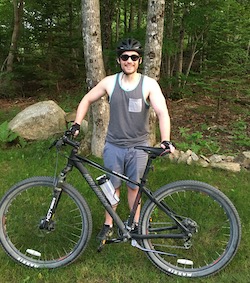 When asked about his favourite Dalhousie memory, Alex has a hard time narrowing it down to just one. “What sticks out the most is when I defended my master’s thesis. It was a lot of hard work over the course of a few years. Completing my thesis defense was the most rewarding when I reached the finish line and realized how much I had put into it.”

Outside work, Alex stays active and enjoys golf in the summer; in the winter, he’s a competitive curler. If you frequent the Rails to Trails, you may cross paths with him, as he is also an avid cyclist.

Alex’s advice for new Dalhousie staff? “Always be open-minded and willing to learn. Show initiative. If you identify a problem that hasn’t been addressed and you have a solution, pitch it. Don’t be afraid of sharing new ideas. Things are always changing; we’ve learned that more than ever in the pandemic. And sometimes you’ll learn in ways you didn’t realize you would.”