Partial funding for tuition, books and housing may be available to you as an Indigenous Black and Mi'kmaw student, on the basis of need. We expect that you will explore all options for financing your education, including student loans, the Federal Department of Justice Legal Studies for Aboriginal People Program (LSAP) and possible Band funding, prior to the beginning of your first year.

Students who are eligible make a funding application to the Indigenous Black and Mi'kmaw (IB&M) Standing Committee. The Committee assesses each application and awards funding based on need. The Standing Committee is made up of four members of the law faculty, including the Director of the Initiative, representatives from the IB&M Advisory Council and two student representatives from the Initiative.

IB&M students may also apply for the financial support available to all law students. 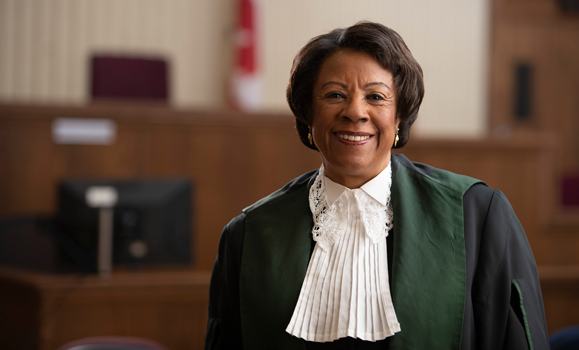 Judge Corrine E Sparks was appointed to the Nova Scotia Family Court in 1987, and became the first African Nova Scotian to be appointed to the bench, and the first African Canadian female to serve on the judiciary in Canada. Throughout her career, Judge Sparks has actively fostered and facilitated judical education and developed educational programs in the area of social context judical education.

The Judge Corrine Sparks Award was established by the Dalhousie Black Law Students' Association in honour of the outstanding contributions to the legal community made by Judge Sparks. The purpose of the award is to celebrate those students that are committed to using their legal education as a tool for change in their community. The award is presented once a year to the student whose personal and academic endeavours most accurately reflect Judge Sparks' spirit of leadership and community service. The award winner shares the award with a community group of his or her choosing.