"The collaborative nature of this funding represents a transformation in the way that health research takes place with Indigenous peoples and communities ..."

“Increasingly, Indigenous partners are looking to shift the balance to ensure that research is: respectful of cultural practice; engages communities; provides opportunities for community members to develop their own strengths, skills and abilities to conduct research; to lead research that is responsive to community need and to look at research needs with a longer and broader holistic lens. Acknowledging Indigenous knowledge and teachings that already exist and learning ways to share information that can impact health policy and program development that meets communities needs and can shape strategic planning objectives is key to the success of any research,” Michelle Wood Health Researcher/Evaluator Nunatsiavut Government, Department of Health and Social Development

“The significant investment being made by the Government of Canada is recognition of the important work being done by the Wabanaki-Labrador Indigenous Health Research Network. By supporting research activities that are led by, with, and for indigenous communities, this network is helping to creating a new legacy of health research.” Dr. Alice Aiken, Vice-President, Research & Innovation Dalhousie University

"The collaborative nature of this funding represents a transformation in the way that health research takes place with Indigenous peoples and communities - the Wabanaki-Labrador Network will provide funding for Indigenous communities to lead, govern and direct the research that affects them and their communities. The end result will be community-generated solutions that will improve health and well-being among Indigenous peoples within Atlantic Canada and beyond."
Dr. Shaun Boe, Associate Dean (Research), Dalhousie Faculty of Health

Indigenous‑Academic Collaboration Aims on Transforming Health Research in Mi’kma’ki, Labrador and Beyond

Posted by Terry Murray-Arnold (with files from CIHR and WLN) on June 26, 2020 in Research

The Canadian Institutes of Health Research has awarded $100.8 million dollars over 16 years to nine new Indigenous health research networks across Canada. This represents the largest single investment in Indigenous health research in Canadian history. One of these networks, The Wabanaki-Labrador Indigenous Health Research Network (WLN) will be hosted at Dalhousie University in partnership with Mi’kmaq, Wolastoqiyik, Inuit and Innu communities and organizations and with academic institutions stretching across all four Atlantic provinces. 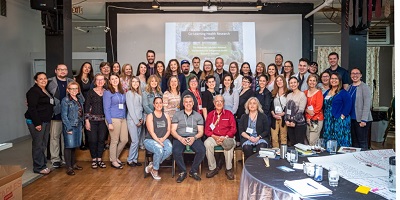 “As we move ever further on the path of reconciliation in Canada, it is important to recognize the knowledge and rights that Indigenous people hold in relation to health research. Southern science and research partnerships have their place. The Wabanaki-Labrador Indigenous Health Research Network is an opportunity for Indigenous peoples to strengthen health research capacity and explore research opportunities that give strength to holistic, Indigenous cultures and practices,” says Michele Wood, an Inuk Researcher/Evaluator with the Nunatsiavut Government and one of the key partners in the formation of the WLN.

The WLN is an interdisciplinary collaboration that is as diverse as it is inclusive. It includes partnerships with Indigenous organizations and communities throughout the region, including the Atlantic Policy Congress of First Nations Chiefs, Union of Nova Scotia Mi’kmaq, Mi’kmaq Native Friendship Centre, NunatuKavut Community Council, Nunatsiavut Government, Mi’kmaq Confederacy of Prince Edward Island, Mi’kmaq Native Friendship Centre, among others. It also includes Indigenous community members, health professionals, students, academics, traditional healers and allies from across all four Atlantic Canada provinces.

“The overarching purpose of the WLN is to really draw on the existing wisdom and organic ability to conduct research that has always existed within Indigenous communities in this region. To that end, we want to shift and transform how research with Indigenous peoples is undertaken,” explains Dr. Debbie Martin who is a member of NunatuKavut, Canada Research Chair in Indigenous Peoples’ Health and Well-Being at Dalhousie University, and the nominated principal investigator for the WLN.

The WLN was awarded funding through Canadian Institutes of Health Research (CIHR) Network Environments for Indigenous Health Research (NEIHR) Program. The goal of the NEIHR program is to “establish a national network of centres focused on capacity development, research and knowledge translation (KT) centred on Indigenous Peoples…” intended to provide “supportive research environments for Indigenous health research driven by, and grounded in, Indigenous communities in Canada.”

“A major goal of this network is to move decisions about research away from being single-handedly led by academic research teams and into the hands of Indigenous communities and organizations, who are most affected by that research,” said Dr. Martin.

John R. Sylliboy, Interim Director of the Wabanaki Two-Spirit Alliance, is a Mi’kmaw researcher who celebrates this news with great enthusiasm. As a co-principal investigator of the initiative “the synergy between my role as the Sex and Gender Champion of the initiative and as the Alliance’s director is a clear pathway to an organizational partnership to promote community-led research on sex, gender and sexual health in the region”, he says.  Sylliboy recognizes the potential to address various Indigenous health concerns, especially for Two-Spirits and Indigenous LGBTQIA+ people, which the Alliance aims to serve under his leadership.

To ensure that research is undertaken with oversight and governance by Indigenous peoples who are most affected by it, the WLN has established a Local Indigenous Governing Circle that will act in an advisory capacity around all major decisions pertaining to the WLN. The WLN research team also consists of Indigenous scholars, policy-makers, Elders and allied researchers.

“The WLN has created a series of intersecting activities that intend to offer Indigenous communities the opportunity to invest in, and lead, meaningful health research, while establishing partnerships to secure the sustainability of the network,” said Dr. Martin.

The activities of the Wabanaki-Labrador Network will include:

• Research and Innovation Co-Learning Lodges which build capacity in community to direct, lead, and independently oversee the roll-out of community-based health research from design to dissemination.

• A funding and mentoring program for trainees that will enhance the work of the existing Atlantic Indigenous Mentorship Network.

• Strategic Communications and Knowledge Exchange which will ensure that the research findings are relevant and useful to the communities involved and are shared widely.

• Knowledge Gardening: sustainability and evaluative activities, such as surveys, the distribution of annual reports, and hosting annual face-to-face meetings to foster shared learnings.

The WLN held a co-learning summit in 2019 and has launched a website that will host Indigenous health research resources and highlight research funded by the WLN.

“This type of research – community initiated, directed and led – is how we create a new legacy of health research – one that offers value and benefits to the Indigenous communities and nations that are involved,” said Dr. Martin.