Posted by Andrew Church on February 21, 2019 in News, Research, Community 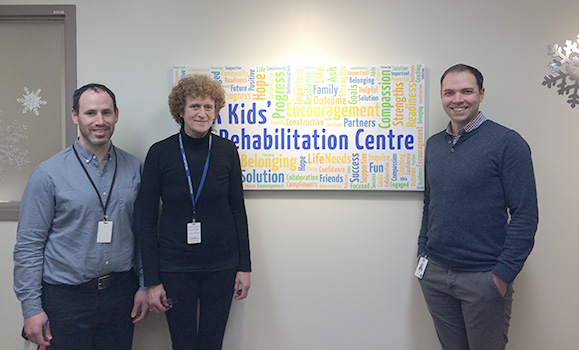 A Translating Research into Care (TRIC) grant has been awarded to a group of IWK and Dalhousie researchers for their study titled: “Nova Scotia Hip Surveillance Program for Children and Youth with Cerebral Palsy”. The goal of the study is to work with and support local health care teams to complete surveillance in the child’s home community.

“It will feel wonderful when we set this program up, because we will be more confident that we won’t miss a child,” said Barbara Kelly, instructor at the School of Physiotherapy, member of the IWK Kids Rehab Clinic team, and co-applicant of the grant. “The TRIC grant will allow us to provide input and support to local health care teams so children with cerebral palsy won’t always have to travel to the IWK.”

Children with cerebral palsy are at increased risk for hip displacement, and will live with it their entire lives. Hip displacement and dislocation can cause pain, difficulty moving the hip, and problems with sitting, standing, and walking. Evidence shows that early identification of hip displacement through screenings can identify hip problems early, allowing for timely intervention. Hip surveillance programs were first established in Sweden and Australia, having since reported significant decrease in hip displacement among children with cerebral palsy. The first province-wide hip surveillance program of its kind in Canada was established in British Columbia in 2016.

“Given the current robust evidence around hip surveillance and recently published evidence-informed screening guidelines, we felt strongly that the introduction of a comprehensive and systematic hip surveillance in Nova Scotia was needed,” said Kelly. “We must ensure that all children with cerebral palsy receive appropriate screening and timely, appropriate referral to a pediatric orthopaedic surgeon to prevent or minimize complications with hip dislocations.”

TRIC grants are part of Nova Scotia’s Healthcare Improvement Research Program, with project funding coming from the QEII Foundation and the IWK Foundation, respectively. The team for the hip surveillance project consists of Kelly, Dr. Jordan Sheriko, Dr. Luke Gauthier, Dr. Pierre Schmit, and Krista Sweet. Collaboration will be key in the success of this project, with parents, pediatric orthopaedic surgeons, pediatric physical medicine and rehabilitation physicians, radiologists, physiotherapists, and policy makers all playing a role.

“We know that it takes many years for research evidence to be translated into practice. In general, the uptake of proven evidence is slow in many areas of health care delivery. This is the beauty of the TRIC grant,” said Kelly. “TRIC grants support research at the point of care that will facilitate the translation of clinical science into improved patient care and service delivery.”