Throughout 2018, the Faculty of Health will be highlighting 200 health achievements from our Faculty’s rich history of teaching, scholarship and service. This feature is part of our Dal Health 200 series. Follow us on Facebook and Twitter to learn more. 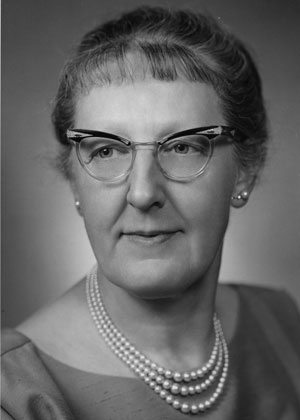 As more and more people became interested in the field  and the need grew, nursing at Dal began to expand. With the help of the Registered Nursing Association of Nova Scotia and the Dean of the Faculty of Medicine, Dr. H.C Grant, the School of Nursing opened its doors in 1949.

Laying the groundwork for nursing education

The first director was E.A Electa MacLennan, a talented educator and leader. She graduated from Dalhousie with a BA in 1929, studied nursing at the Royal Victoria School of Nursing in Montreal and obtained a Master’s Degree from Columbia University in New York. She was joined by Marion Pennington, a WWII veteran and public health nurse, as the only two faculty members.

The school offered an entry level nursing degree and postgraduate certificates in public health. It also offered nursing education and nursing administration programs for nurses holding a diploma from a hospital-based program.

Harry Spindler was the first male graduate of the program, finishing his studies in 1959. The first African Nova Scotian to graduate from the School was Elnora Jackson of Bridgewater, who also obtained her diploma in 1959.

In 1961, Dal became the first university in Canada to establish a Faculty of Health Professions, combining the School of Nursing and the College of Pharmacy.The Faculty focused on human health studies.

Professor MacLennan, along with the director of the College of Pharmacy, reported directly to the president at the time, A. E Kerr and the new Dean Dr. R. M. MacDonald.

In 1966, Ruth May, a graduate from Wellesley College and a midwife, was taken on to teach two postgraduate programs. She was also responsible for co-creating the Outpost Nursing program, a program designed to train nurses to work in remote areas, particularly in Canada’s North.

For her achievements, Ruth May was awarded the title of Doctor of Laws (honoris causa) from Dal in 1999.

Electa MacLennan retired in 1970 after a long and fulfilling career. The Masters of Nursing was established around the same time, and enrolment began to increase.