Contributing to the experience

The word ‘dedicated’ comes up a lot when people talk about Computer Science student Brandon Poole.

It’s no wonder: Brandon is so involved with activities outside of classes that he says he sometimes forgets he’s a student.

“There’s so much going on, so much to be a part of — it’s easy to feel at home in this community.”

In his first year, Brandon joined the Computer Science Society (CSS) as secretary, now he’s society president. He’s been a teaching assistant every semester he can — he loves teaching. He’s also working as a communications assistant, managing the faculty’s social media accounts.

For Brandon, it’s all quite intentional.

“People think they have to go out of their way to volunteer but I think change on a global scale, which everyone seems to want to do, can really start where you currently are. So, when you’re a part of something that is very localized like the CSS, you can build that in such a way that it affects people outside of your faculty.”

He sees the Course Representatives idea as an example of that. As CSS president, he’s working with Associate Dean Academic Christian Blouin to address issues within classes when they come up, instead of waiting to discover problems through course ratings at the end of the semester. At the start of the term, they reach out for volunteer Course Representatives from each class.

“We give them a handbook with all their resources so they can act as a funnel to ensure issues get to the relevant people.

“For example, let's say you’re a CR for a course I'm in and I say, ‘Hey, this due date is unreasonable but I'm afraid of talking to the prof because I don't want it to reflect negatively on me.’ The CR takes this information and anonymously passes it on to the prof, who then addresses it either with the CR or with the class as a whole. It works and it's amazing.” Now other faculty societies are watching with interest.

Brandon discovered Computer Science in grade nine when the option came up as a recommended career choice on an aptitude test. “I loved computers and when I realized I could spend my life on computers I thought that sounded great.”

The only problem? Brandon wasn’t a big fan of math and the Computer Programming class offered in grade 12 required advanced math and pre-calculus. Brandon really wanted to take that class, so he decided to put in the work. 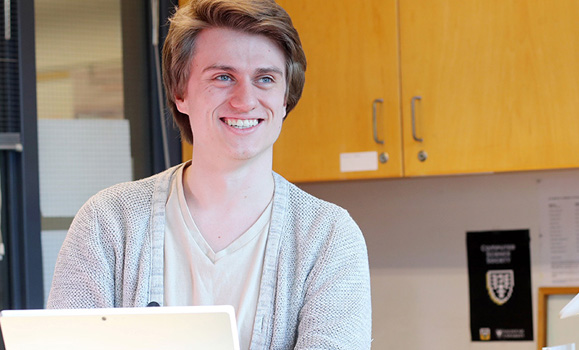 “I knew it was going to get harder and harder,” he explains. “I couldn’t goof off because I had to get the skills that would help me get through the next class.”

Just as he was about to achieve his goal, the Computer Programming class was cancelled. Though disappointed, he decided to shift his focus to getting into his choice of university, hoping he’d like computer programming when he got there. He did.

Any doubts Brandon had about his choice of major were quickly erased when he got to the Faculty of Computer Science and discovered the incredible sense of community. That’s one of the reasons he’s passionate about contributing.

“Everyone gets to know your name, especially if you come to the Learning Centre,” he says. “I don't think you'll find that in very many faculties, that space where people aren't always competing and they'll set aside 20 minutes to help you with a first or second year course. People really care and I think that's a very rare quality.”

Brandon also speaks highly of the co-op program. “I don’t know if I’d have any of the options I’ll have if I didn’t do co-op. I have lots of industry contacts from my placements.”

His dedication and ingenuity have earned Brandon the Faculty Leadership Award, Computer Science Society Leadership award, Citizenship award, TA award and elusive Root award — only given out every few years to a student who has made a lasting impression in the faculty.

Brandon realizes that level of involvement isn’t for everyone, but he encourages new students to approach their university experience with an open mind.

“Take your first year to see all the opportunities around you, discover what interests you and be really dedicated to that one thing. To actually build something takes time and understanding and if you're too spread out you won't be able to make the opportunities happen.”