Getting to the Source Code of a Fulfilling Career

After quitting her job in public relations, Ariane Hanlon decided to take an Introduction to Computer Science course to fill her time. It didn’t take long for her to discover that coding was a better fit than communications.

“About a week in to the class I realized that, for me, a really frustrating day doing coding was better than any day doing PR,” she recalls. “I took that as a pretty clear sign I should change career paths.”

Now in her final year of the Applied Computer Science program, Ariane still feels she made the right choice — and she’s also discovered that it’s not actually all that different.

“My database classes are about taking information and producing some kind of knowledge from all these little data points,” she explains. “It’s similar to what I did in my Journalism degree — you collect information and then you synthesize it and ask yourself, ‘what’s the story here?’ That’s what interests me.” 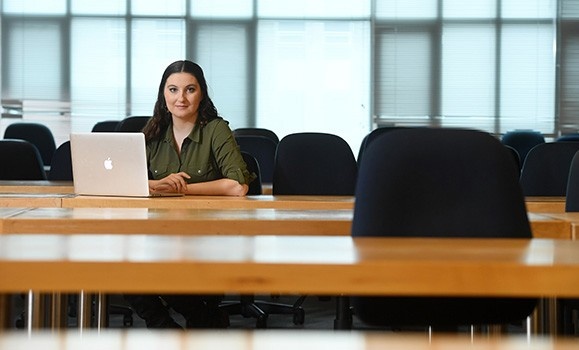 Ariane is also encouraged by the number of career options that are available to her. She has her hopes set on something in data work or web development. Her interest in web development also complements her previous degree: “I’ve had training in web design and, now, in web development so I can see it from both sides. When I’m working with the bones of it I have a more complete understanding.”

Putting CS on the radar

Ariane is completing her degree during an exciting time. In 2018, Dalhousie’s 200th anniversary year, the Faculty of Computer Science is aiming to double the number of female students entering its undergraduate programs. So far, they’re well on the way to achieving that goal.

When Ariane thinks about it, she suspects the gender gap was mostly a matter of awareness. “I just didn’t even think of Computer Science,” she says. “It’s not that I thought I couldn’t do it or it wouldn’t interest me, it wasn’t even on my radar.”

Her work leading the Halifax Chapter of Teachers Learning Code will help address awareness issues. The initiative ensures teachers are comfortable with coding so they can introduce it to their classes. The first workshop in Halifax was held on February 17. Ariane was excited to see how her pilot workshop would be received. “That was the test for whether the content I’d put together is useful to the teachers who attended.” 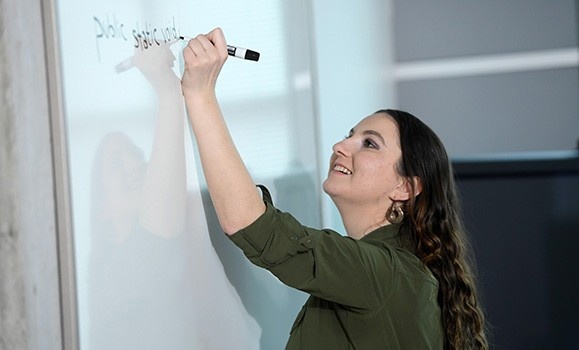 She wasn’t too concerned — the parent initiative, Canada Learning Code has a strong track record with making coding fun and accessible. “What I like is that we focus on tangible results,” she says. “So if someone comes in knowing nothing, by the end of the day they can confidently make a web page about themselves. That's really fun to see.”

Ariane is also enthusiastic about Teachers Learning Code because it connects kids with coding. She learned first hand how coding can boost the confidence and skills of students.

“Programming is math and I didn't clue into that until about two months into it, when a whole bunch of math snapped into place. I think if I had learned the basics of programming as a child, I probably wouldn't have struggled with math as much.”

For now, she’s excited about what the future might hold. She finds the work interesting and that’s a good place to start.

“I quit my job because I was so bored and I thought it had no real purpose,” she admits. “But when you learn to program you realize you can use it to do the most menial tasks, like build yourself a calculator — or you can build apps that are used in hospitals. You can work in any field and imagine any function that would be useful to someone, and then you can figure out how to make it.”