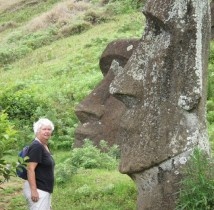 Marian Binkley, an anthropologist, has conducted extensive research in maritime communities. Her first two books, Voices from Off Shore (1994) and Risks, Dangers and Rewards (1995) focus on working conditions, in the Nova Scotian deep sea fishing fleet. Her next monograph, Set Adrift: Fishing Families (2002) compares coastal and deep sea fishermen's households in their adaptations to the extraordinary pressures put upon them by the current Atlantic Canadian fisheries crisis and its effects on these men's work. Her lastest volume Changing Tides: Gender, globalization and world fisheries (2005), co-edited with Barbara Neis, Siri Gerard and Christina Manezy, explores the relationship between globalization and gender against the backdrop of the world fisheries crisis.

Professor Binkley's current research extends in two directions. One project examines the relationship between tourism and sustainable livelihoods. The other project looks at the relationships between the cod fish moratorium and occupational health and safety concerns of fishers of Newfoundland and Labrador. Professor Binkley has also been involved in development projects in the West Indies, Indonesia, and the Philippines, focusing on resource management and other environmental concerns.